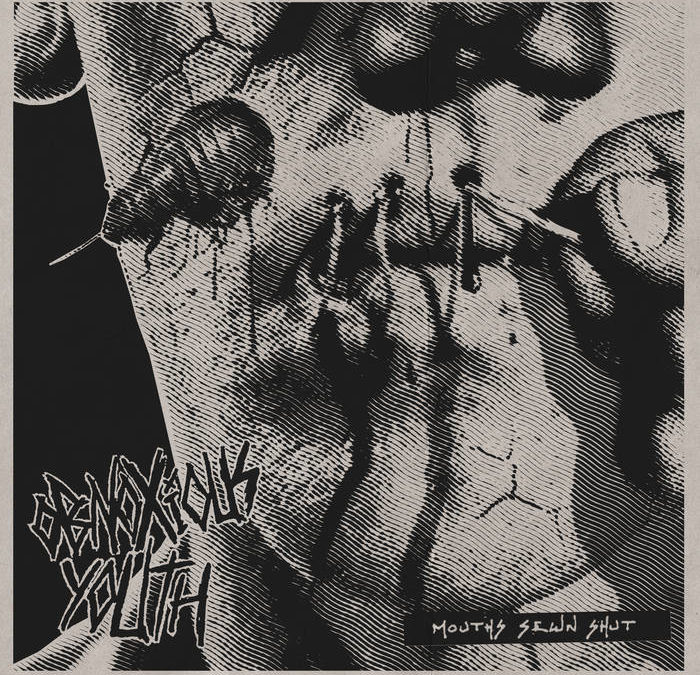 Obnoxious Youth are a Swedish/Finnish band who have been making punky blackened speed metal for over a decade, but they don’t get much attention over here. Hopefully, a new partnership with Svart Records and a new EP, Mouths Sewn shut will change that. Some of the band’s members have the odd commonality of also playing in bands with people who have played in Watain, but there are no direct links here beyond an obvious musical influence. That statement could be taken a few different ways, but in this case, Obnoxious Youth learn the good lessons from their friends; the ones about catchy riffs, hooky songs, and the fun side of black metal. Obnoxious Youth are far from a Watain or Dissection rip-off; they have more in common musically with Kvelertak or Michigan’s own Cavalcade, and their new EP is an impressive piece of work that combines classic metal composition, avantgarde instrumentation, and a brash attitude into nineteen minutes of thoroughly modern-sounding punk.

When a band has a Theremin, they like to let you know up front. So is the case with Obnoxious Youth, who open the EP with spacey guitar and whirling Theremin sounds. The liner notes say that there’s sitar, too, but mostly there’s furious punky Venom-style black metal over energetic drum beats that switch gears and shift tempos but never stumble or lose their sense of momentum. The title track was released early as a single, and I honestly feel it’s the record’s weakest song. That’s not to say it isn’t good; it’s wicked fast and horribly grimy in all the best ways, but the rest of the record shines much brighter in my opinion. Its follow up track, “Funeral”, with the galloping guitar riff that sounds like Kill ‘Em All Metallica and its sing along hook, is my single favorite on the EP. Afterwards, “succumb” is more of the same, with a fist-pumping main section and catchy guitar riffs that swirl through an MXR phaser pedal like Eddie Van Halen. Penultimate track “The Eye” is an absolute banger as well, even with its sub two minute run time, and the EP closer brings out the heavy guns, turning the tempos up and the key changes down as “Dripping Organs” verges into proto-death territory before fading into psychedelic Theremin noise.

On Mouths Sewn Shut, Obnoxious Youth are showing off more than their technical chops or their ability to play fast. The musicianship is at once loose and unpolished and tight enough to handle any of the sudden shifts in groove or time that keep the all-killer-no-filler tracklist interesting. This is a band who also know how to write a good song, and they’ve done it six times in a row on their new EP. Above criticism aside, there isn’t a bad song on the record, and it’s so short that you never have time to grow tired of it before it’s over and you’re reaching for the “play” button to run it again.

My favorite aspect of the metal experience is the live concert setting, and particularly those live settings that manage to feel unique and personal. Many of my favorite metal and punk records are ones that can recreate the feeling of seeing the band in such a setting, and though I haven’t quite quantified this trait yet, I will say that Obnoxious Youth deliver the feeling brilliantly on their new EP. This sounds like one of the best basement punk shows I never got to see, and in the midst of this contagious viral outbreak that hasn’t shown any signs of getting better yet; it seems possible that I’ll never get to experience a live show in a crowded room full of sweaty headbangers and spilled beer ever again. But records like Mouths Sewn Shut can still give me that feeling…