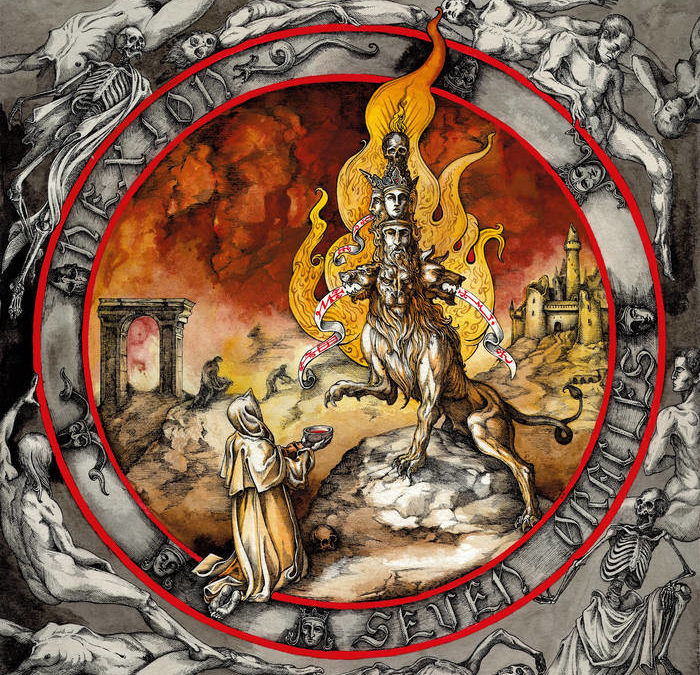 Through it… the maelstrom of Nihil: NEXION – Seven Oracles, A Review

Like ritual artifacts placed purposefully around the perimeter of a prophetic shrine, every title, word, image, note, sound, and utterance from Icelandic black metal entity NEXION has been crafted together with a full intention to create a coherent meditation on pursuit of decimating esoteric wisdom. Entitled Seven Oracles, this prophetic masterpiece is NEXION’s debut full-length album, released through the illustrious Avantgarde Records.

Let’s start with the title: Seven Oracles is reflective not only of the subject matter of the album (a convergence of seven daemonic entities which together erode the superficial fabric of human meaning, truth, and existence) but also of the structure of the album, which presents a song for each oracle. The album cover art, collaboratively created by occult-art magnus Jose Gabriel Alegría Sabogal (MEPHORASH, INFERNO, WHOREDOM RIFE, LUCTUS, and ARCADA among many others), follows suit. A hooded figure, presumably the listener, kneels in the dirt while ruins of mankind sit aloft, and makes a blood offering below a towering beast of seven heads, enveloped in radiant flame. Importantly, this depiction is contained within a crimson ring, along which is etched the band name, album name, seven faces, and a serpent, and beyond which is a grayscale, purgatorial illustration of skeletal and decapitated figures.

Forgoing the overtly claustrophobic and oppressive signature Icelandic black metal style for one that is more dynamic, aggressive, catchy, melodic, and with hints of death metal brutality, the NEXION’s music perfectly corresponds to the both the motif and visuals. As “Seven Oracles” leads in, menace steadily progressing into fury, the full spectrum of earthly material to divine fire can be heard. Sigurður Jakobsson’s percussion particularly seems to embody the former, as it comes across as punchy and solid, but not heavily processed, technical, or mechanical… robust, destructive, sometimes ritualistic (beginning of “Divine Wind and Holocaust Clouds”) and even militant (midway through “Revelation of Unbeing”) but distinctly and deliberately organic. Kári Pálsson’s bass, heavy, warm, and present without being overbearing, as well as the infernal, insidious, and often melodic rhythm guitars of Jóhannes Smári Smárason and Óskar Rúnarsson serve to bridge the gap between below and above, providing an auditory connection between stone and flame.

The higher, hotter realms are represented by the lead guitars, primarily courtesy of main riff-writer Smárason. These notes noticeably erupt from the top of the mix, just as the blazing pyre bursts from the top of the crowning deathhead oracle on the cover art. Swirling, winding, lashing, the riffs here are elevated and luminous, yet mercurial, intoxicating, hypnotic, and on the verge of being almost violently hallucinatory. And then there are Joshua Hróðgeir Rood’s vocals, so varied that alone they manage to encompass the aforementioned spectrum of the instrumentation. Devastatingly low deathish growls emote subterranean monstrosity, while slightly higher, ragged, and fucking ferocious black metal roars (similar to Daniel Rostén/Arioch/Mortuus of MARDUK and FUNERAL MIST fame) comprise general standard. Additionally there are some fucking incinerating drawn-out BM screams further up on the register, extended to that point where one takes notice and starts to wonder exactly when breath will be exhausted. Transcending the inferno altogether are well-placed deep, clean chants.

Lyrics articulate the dissolution of human construction and belief from the seven perspectives, and tend to revolve around messages of ontological violence, cataclysmic revelation, corrupted sanctity, existential death, cosmic darkness, abyssal wisdom, pestilential chaos, and the prophecy of some sort of oblivion messiah for the final track. Beautifully, each track possesses its own visual interpretation from Sabogal, and this final, terrible, exalted entity holds in one hand a ring, lyrics proclaiming: “Held she a great ring, and through it I did peer. And before my eyes unfolded time, and I did see the maelstrom of Nihil consuming all of existence, and wrapped around its rim, Leviathan devouring itself.” I suspect that the similarity of this ring to the cover art described above (a ring containing a serpent, within which is an image representing the listener and the beast of Seven Oracles, the manifestation of ultimate reckoning) is no coincidence, and in fact creates a compounding, self-reflective cycle of entropic awareness which links the subject of the album to the structural properties of album itself as well as to the experience of hearing it.

NEXION has created a multi-layered masterwork of apocalyptic proportions. Seven Oracles is currently available on digital, compact disk, and vinyl formats from NEXSION’s Bandcamp, Avantgarde Music’s Bandcamp and webstore, and distributed through Season of Mist, among others. Immerse yourself.