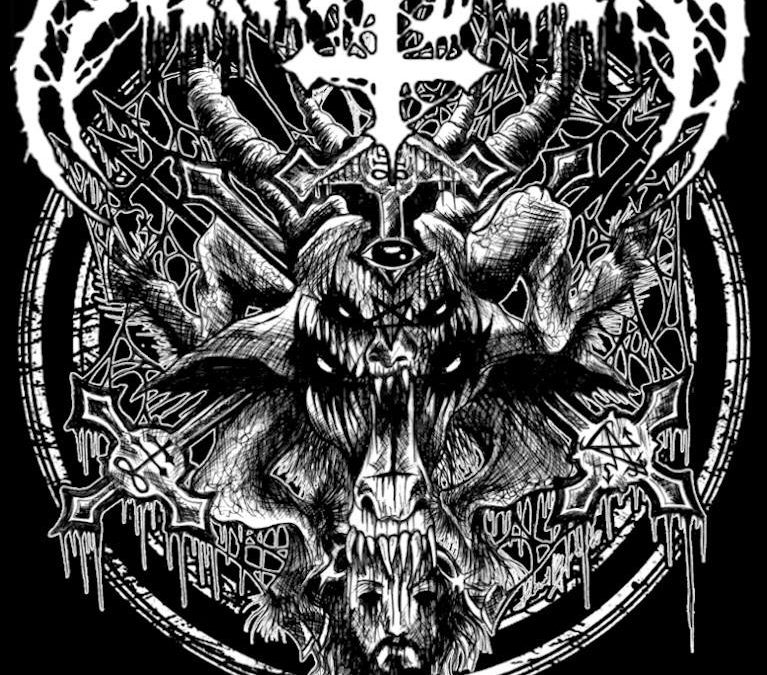 Something oozes forth from the dark dungeons of Ustka in Pomerania. While the tourists wander through the seaside town, something watches and waits. Glowing red eyes peer around corners after darkness falls, watching…waiting…

Lord Kaos, the man behind the madness that is Nekkrofukk, started the project in 2012 by calling forth the unholy sounds of the Nukklear Goat Vomit demo. Across five tracks of murky darkness, the breath of destruction breathes moste foule… The demo starts off by setting it’s priorities from the beginning. Aptly titled Sperm of the Goatlord, the slow-paced (by black and death metal standards) track rolls through four and a half minutes of gritty guitars, patient drums, and the murky, everpresent call, “Sperm of the Goatlord”, the entire lyric for the track, though repeated as it calls forth the Goatlord to spread his seed. The remainder of the demo proceeds in much the same way. I find myself drawn into the bleak nightmare, head nodding, belligerent visions of madness swarming across my vision. Minute changes of percussive pacing or guitar tone create a sparse diversity while a clanging which could be keyboards or another guitar track makes occasional appearances to add to the tension.

Now the creature hunts, looking to satiate it’s many desires. What victim will it find? Where can safety be provided from the hunt? Time will tell the answer to the first. In answer to the second, nowhere. There is no safe haven.

A year later in 2013, Lord Kaos visits a new nightmare upon his sleepy seaside tourist town in the form of the Satan, Urine, Blood, Sperm demo. This time we are treated to twenty three minutes across five tracks and in intro, in which we get to hear the sounds of the Goatlord’s latest conquest. A casual listen will reveal many similarities between this and the 2012 demo. There is a similar murkiness, a similar magnetic pull into darkness, a similar pacing. A careful listen reveals more variety in several areas. The pacing is more robust, without reducing the pull into the void. The keyboards are more distinctly noticeable in parts, though still used sparingly to create tension. While the vocals remain mostly a deep, gruff growl done through some sort of voice modulator, there is more variety here as well, with some higher yells as accent. With that said, this demo is equally entrancing.

It is done, both the kill and the coupling, though not necessarily in that order. The Goatlord is satiated. Back to his underground domain. Back to the darkness. For now…

Nukklear Satan, Goat Urine, Blood Vomit Sperm, the cassette release by Analög Ragnarök features these two demos, one on each side, in packaging that is sure to please any collector. As is always the case with the label, the cassette will feature a full body print. The outer packing is unique as well, though I’ll leave that for you to discover. According to the label, there will be no Bandcamp sale. If you’d like a copy, reach out directly to Analög Ragnarök. You won’t be disappointed.