MrKill – The Day Of Reckoning 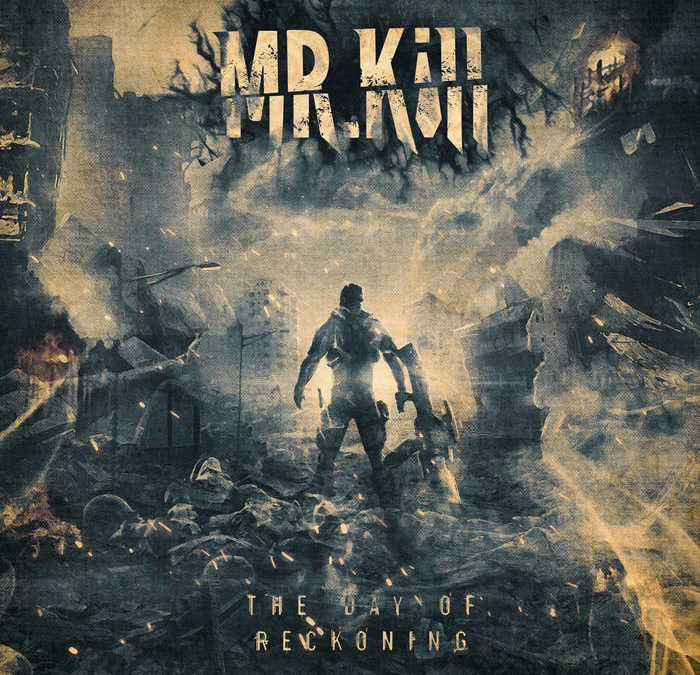 Album – The Day Of Reckoning EP

MrKill has got to be one of the more interesting concepts I’ve heard this year. This is more than a concept album, it’s a concept band. The band embodies the character MrKill, an ex-special forces vet turned businessman, who uses business strategy and brutal combat skills to get what he wants when he wants. Picture a cross between the Rambo and American Psycho movies, with a melodic death metal soundtrack, and you have the overall theme of the band.

A concept album by a concept band based on a concept character. Concept inception? Conception? Hmmm. At least this is the impression I get from their bio, but that could all be open to interpretation.

MrKill takes themselves seriously but isn’t afraid of a little tongue in cheek irreverence, and their album art is a prime example. The artwork seems to be inspired by modern videogames and wouldn’t seem out of place on the cover of the next Call Of Duty or DOOM cover, plus making the “i” in the MrKill logo look like a business tie is a nice touch.

Note: This EP is twenty-six minutes long. I enjoyed twenty-four of those minutes, and the two minutes I didn’t were the first two. So don’t dismiss this EP based on these next two paragraphs.

The Day Of Reckoning EP doesn’t open up very strongly. The Descent (intro) is a minute of atmospheric noise/music that sounds like the generic menu music played in every B grade military shooter video game. It tries to set the tone but comes across as bland and forgettable. I honestly left the album alone for a week and forgot the intro existed.

Track two is Annihilation and it starts off with a riff of four notes played three times each, and this goes on for a full minute… I haven’t counted to three so many times, since I tried waltzing (don’t judge, I was a kid). And then the backing guitar and bass come in sounding a lot like the Terminator 2 theme. Oof, just oof.

As soon as that first minute is over, Annihilation kicks things into high gear with far more imaginative riffs that save me from the brink of insanity. That intro riff returns briefly later, but thankfully doesn’t overstay its welcome.

Justin Ks’ growled vocal style reminds me of classic DevilDriver, In Flames, and Arch Enemy…just mmm good stuff. I’m partial to the old growl scream style of the mid-2000s because it’s easier to understand and you can actually picture someone pissed off at the world and using that voice (I use it as my “dad voice”, thank you Mellisa Cross).

Next is Hatred, which I think is my favorite track. Everyone seems to be in top form on this track, especially Xines’s drumming and Scott Henderson’s lead guitar work, and that guitar solo is mmm mmm good like Campbells.

Valiant Amusement gave me the most classic In Flames vibes. Mr. Kill has admitted they are an influence and this song feels like a love letter to that classic In Flames style. I also love how Justin Ks’ vocals transition seamlessly from growling to pig squeal during the chorus mid-word. “End of the li-eeeee-ne!” You can’t deny he has some impressive chops.

Next comes Oblivion. This song has angelic sounding background singers bringing the atmosphere that Mr. Kill’s rampage is coming to an epic conclusion. The backing vocals aren’t bad and do work fairly well but they will make it clear that this EP didn’t have the budget it deserved. For better or worse, the song still has solid songwriting at its core, despite its production flaws.

Finally, we come to Elegy (Outro) a minute and a half of piano that had me picturing MrKill looking over his destruction and introspectively contemplating his life. Probably saying things like “If business is war and war is hell, then is the hell I’ve created just business?”. What I’m trying to say is that Elegy had me invested. It fits perfectly with the concept and lore of the band and EP unlike the MANY cheesy and poorly planned outros we normally get from other artists.

Overall this EP is solid and I look forward to MrKill’s next adventure, I give it one thumb up.