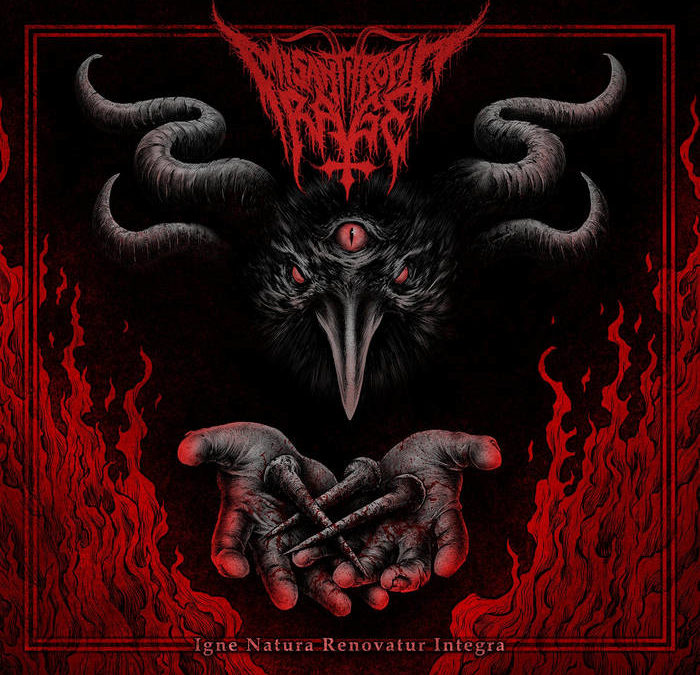 Where do you start with a band like Misanthropic Rage? Track one. That’s where you start. The album opener, Call All Your Angels, starts with a haunting passage of acoustics and clean vocals. It’s quite cool but this riff is played so often in the first half of the song that I had no desire to ever hear it again. And, at seven minutes and thirty-nine seconds, Call All Your Angels is a long song. Fortunately, at about the halfway mark…shit…gets…interesting.

The rest of the album, and the rest of the opening track, is this weird hybrid of experimental Black and Death Metal. Encyclopedia Metallum says Misanthropic Rage play Avant-garde Black Metal. I can see that. Whatever you want to call it, it’s cool as poo. A problem here though is that, as a reviewer, one aim I have is to provide a written description of what the music sounds like. A shortcut I, and many other reviewers, use is to drop the names of bands that sound similar to the band we’re reviewing. Well, that’s tough when talking about Misanthropic Rage. Arcturus maybe? Blut aus Nord? I’m clutching at straws here. I’m doing a disservice to each of these bands because they don’t really sound alike. But, each of them are happy to break the mold.

There are a few weak points on this album but, as I’ve said in other reviews, if you experiment it works sometimes and doesn’t work at others. But, at least Misanthropic Rage are trying something different. And, I’d rather listen to someone trying something new than recycling the same tired shit over and over again. Yes! I’m looking at you Darkthrone.

I’m glad I pushed through the first half of Calling All Your Angels because there’s some very cool stuff on this album. A highlight for me was Abstrakt. That song is fucked up. Also, the bass sound is dirty AF. So, bonus marks for that.