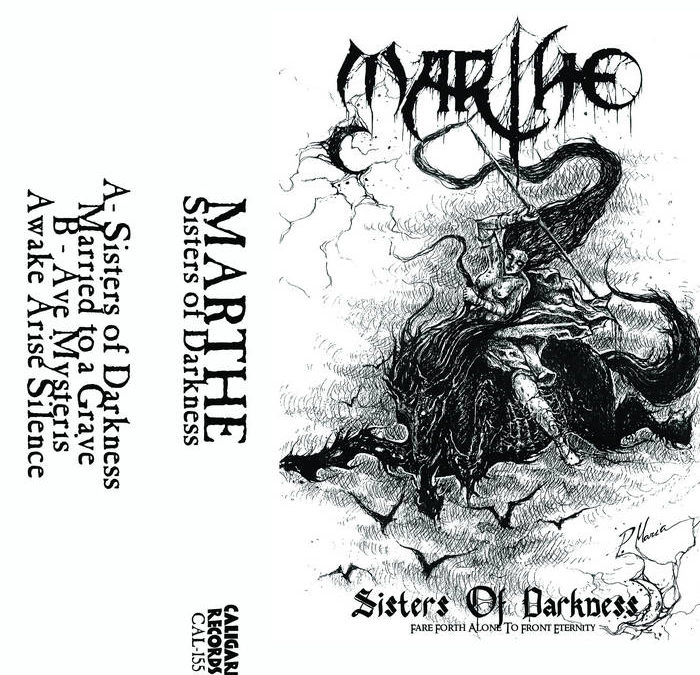 Caligari Records boasts that they are “dedicated to harsh and unlovable music”, which may fit just fine for some of their other artists. Bloodsoaked Necrovoid, Act of Impalement, or Witchcraft Sodomizer, come to mind. To be fair, though, these groups are not without their charms. They just happen to be harsh and unlovable. While the music on MARTHE’s debut EP, “Sisters of Darkness” does not even come close to being either, it certainly fits second half Calagari’s mantra: “Underground music for underground people”.

MARTHE is a one-woman DIY machine, which is evidenced within the first two minutes of the EP’s opening title track. With a lo-fi demonized electric guitar over a backdrop of what sounds like children praying, slowly building into a Doom-like groove, the likes of which any fan of Saint Vitus or Bathory will immediately appreciate. The latter is even more present when the vocals begin.

“This is the hand that is armed by doom,” she sings, “the only weapon that can bless you in the abyss”. She, being Marzia; an artist clearly proud of those who paved the path for music complex in its simplicity. You can almost picture this woman speeding down the road on a Harley, middle finger in the air, not giving a flying fuck what anybody thinks. Her ostensible contempt for likability, of course, makes her infinitely more likable, a fact that would probably drive both purists and elitists crazy. But do you know what drives me crazy? Purists and elitists! That’s right! Fuck those guys! Because MARTHE kicks all sorts of ass!

“Married to a Grave” and “Ave Mysteries” carry so much weight, together they’ll crush your spine! They’ve got Doom, they’ve got Punk, they’ve got Viking-like singalong choruses, riffs, and rhymes. There are break-downs, and tempo changes, and you’d better watch out for that bass!

All of these songs, recorded in a bedroom Marzia dubbed “Studio Hammer”, are low-key written and arena ready. Though I’d be willing to bet they’d sound as killer in the kitchen as they would in a coliseum, and that’s no exaggeration.

“Awake Arise Silence” is an eleven-minute opus that starts like a blues tune, and ends like a battering ram. The guitar is positively dripping with reverb, as the vocals hum low. Equal parts chant and lullaby, Marzia’s voice is doubled, maybe tripled, building slowly into a Swans-like refrain:

“Sisters of Darkness” is an absolutely stunning chunk of creativity, clocking in at just over thirty minutes of pure crusty punk rock infused metallic joy. You will not be sorry for spending time with it, but you might be sorry there isn’t more for seconds.