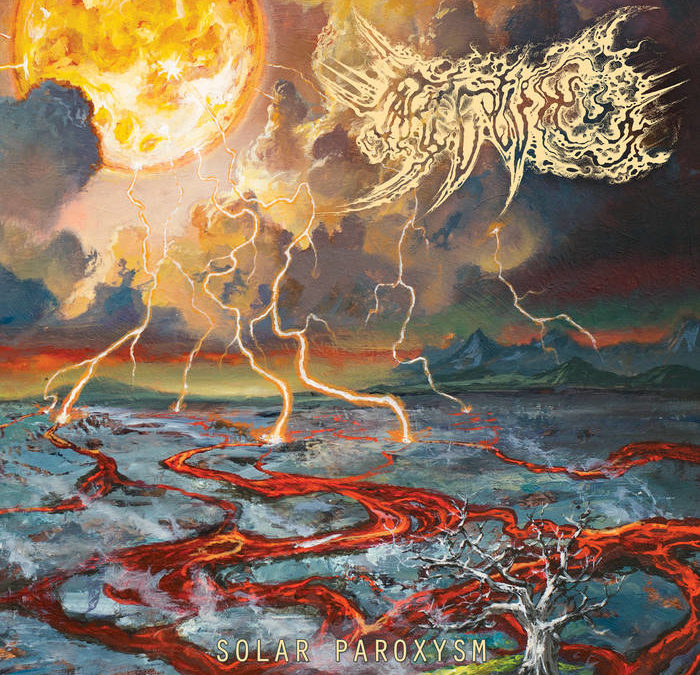 Clocking in at over 58 minutes, the new Mare Cognitum is a beast of an album and it is one that I’ve had a great time exploring. Over and over, in fact. Following up last year’s split/collaboration with Spectral Lore, which was my personal favorite album of 2020, I find the new Mare Cognitum album to be an adequate step forward. While I preferred the Mare Cognitum tracks over the Spectral Lore tracks, the latter definitely added something, if not a LOT, to the overall feel and completeness of last year’s split. This album seems more cohesive, which makes sense considering it is just the one “band”. If you aren’t aware, Mare Cognitum is just one man by the name of Jacob Buczarski, and I consider him a true artist within the black metal scene.

The first track on Solar Paroxysm seems very much on par with his former work, with blasting drums, ethereal energy and an unmatched cosmic atmosphere. Meandering leads played over pounding drum tracks, with constant driving rhythm guitar riffs is what is on the menu and it just WORKS. This absolutely feels like a lost track from the aforementioned Wanderers split. This is not a bad thing and doesn’t surprise me, however I am glad the following tracks add some variety to the mix.

Frozen Star Divinization is the second song on the album and it is a rager. Indeed it seems to have a slightly different feel than the first track, though it is quite evident that this is a Mare Cognitum track. Featuring blasting drums, riffs that feel like they traveled millions of light years to reach us and otherworldly vocals that are unleashed from beyond time itself. I feel as though the amazing cover art for Solar Paroxysm was meant to represent this track… Lightning, magma and chaos. This song may indeed be my favorite of the album and is an excellent place to start if you aren’t familiar with the genius of Mare Cognitum’s compositions.

Where the second track feels like the champion amongst greats on this offering, Terra Requiem feels a bit more subdued… Almost doomish in presentation and execution. Long drawn out notes are played, with anguished screams, drenched with a very bleak overtone. This also feels like it could have been an extra track from the previously mentioned split. Again, not a bad thing, however this may be my least favorite on the album… Though I do enjoy the dreariness and the harsh, violent ending. It’s a great song, no doubt, I just feel the other four tracks hold my attention more than Terra Requiem.

Voyaging through the cosmos, in our black metal spaceship, rocketing towards the epicness that is Luminous Accretion, we find yet another high quality Mare Cognitum track. This time, the general essence is a hyperstorm of charged particles rushing towards you, actually penetrating and passing through your body like cosmic radiation. Complex and quick riffing combined with absolutely crushing and seemingly hypersonic drumming, complete with killer cymbal work and venomous vocals. This track has it all and is my second favorite of Solar Paroxysm. Luminous Accretion has it all… I find myself drifting towards the edge of our solar system, while literally spacing out on its ceaseless melancholic and powerful aura.

Rounding out and closing the album, is another track comprised of sheer enormity and absolute power. Ataraxia Tunnels is the longest song on the album and it feels like the proper placement for the end of such a journey. Traveling further into the cosmos, guided by only starlight and the omnipresent sounds of wailing guitars, wandering rhythm riffs and pulverizing bottom end… I am floored every time I hear this absolute legend of a track and marvel at the way it perfectly completes this masterpiece of an album. Ataraxia Tunnels is an unbelievably powerful and memorable closer.

What is really interesting and I’m not sure if it’s just ME, but it feels and sounds really good to restart this album immediately after it finishes. It flows well and almost seems cyclical and as if it can go forever… Just as drifting slowly through the void of space. Endlessly wandering, always shifting… expanding and contracting. Solar Paroxysm feels very much like a continuation of last year’s split with Spectral Lore. While not QUITE as epic as that album (I feel Spectral Lore added a LOT), it holds up VERY well and I’ve already heard it over ten times. If you enjoy cosmic, atmospheric black metal, I can not recommend this enough. It is a true journey, weaved with layers and layers of near indescribable auras and feelings. Solar Paroxysm is definitely a contender for album of the year and it will be impressive if it is topped. While I don’t think this is better than Wanderers: Astrology of the Nine, it is still an absolute winner and I’m looking forward to anything that comes next from Mare Cognitum, in the future.