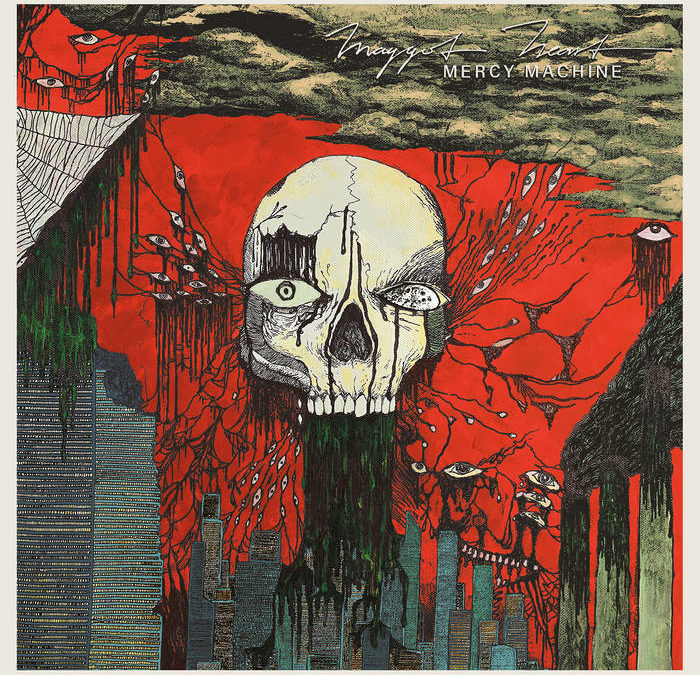 Back in the heat of July is Maggot Heart, a trio consisting of Linnéa Olsson with guitar and vocals, Olivia Airey on bass, and Uno Bruniusson playing drums. Their second full length, Mercy Machine is a fever dream of shattered glass mazes, mounds of heavenly trash bodies, and deep red flowers in full bloom. There are ten rip-roaring tracks found on this album to help you get through your quarantine summertime blues.

Mercy Machine begins with immediate confrontation. Clattering thuds, jarring stomps and chugging echoes begin the opening track Second Class. This one is a spiteful headbanger, an anthem for survival. Olsson spits out,

BUT YOU’RE SO FAR

FROM ANY KIND OF ACHIEVEMENT.

The guitar tone is thick with grit and malice. The riff is playful and jagged, reminding me of the rickety swaying motion of 1930s animation. It’s the hanging tongue from a devil’s mouth, bold and swinging against grainy textures. The bass line seems to sneer and weaves a trail of unease. This track charms you into tapping your feet along to it. Second Class is a superb way to open up the album.

Immediately following is Sex Breath, a song full of twirling twists and turns. There’s non-stop action found within this one. This track chugs along without pause, without a second thought. The build up to the chorus features a hair-raising trembling guitar, the drums giving off steam. The guitar echoing the chorus as Olsson sings,

CAUGHT IN THE MACHINERY OF NIGHT.

Sex Breath is just under three minutes, but it is packed so full of energy that it feels as though it’s a full blown journey through jagged angle buildings and quick turn streets.

Up next is the chugging daze of Justine. This track is something unseen slinking through the night. It’s the shadowed figures creeping around in the peripheral of sleep-deprived, red-eyed late nights. The lyrics beckoning someone back.

EVERY WOMAN IS A STAR

EVEN THOSE WHO GO TOO FAR ACROSS THE LINE

The instrumentation feels sinister and wicked. The lyrics deal with sleep deprivation and shameful sermons.

I’VE BEEN COUNTING SIXES AND SEVENS UP ALL NIGHT

JUSTINE, I AM CALLING YOU CLOSER

I’M NOT FAR BEHIND

Gutter Feeling, the fifth track on the album, features a guitar line after the chorus, that sounds like a vortex of vultures swooping down in circular motion toward their dead meat.

The next track Senseless, probably one of my favorites from the album, features drums that sputter like a train and a bass line that slithers beneath. The guitar sounds sinister and the lyrics follow suit.

I SEE THE DOGS OF DEATH IN MY GARDEN.

The final track, Modern Cruelty, sounds like what it feels like to stumble as you’re attempting to get away from something. It’s that quickened pace fumbling into a charge. The track pulls you in within the first few seconds with the lyrics touching on the struggle of getting through another day.

YOU TAKE YOUR PILLS TO GET BY.

The change of pace in this song caught me off-guard, but it works so well. There’s agitation in the final strums and the album is over.

Recommendation: Mercy Machine is one of the most engrossing albums I’ve heard this year. The songs are exciting and change up in ways that are unexpected. They’re jagged and razor sharp, machine-like at some points and highly catchy. It brings a lot of grit and grime into an overpolished world.