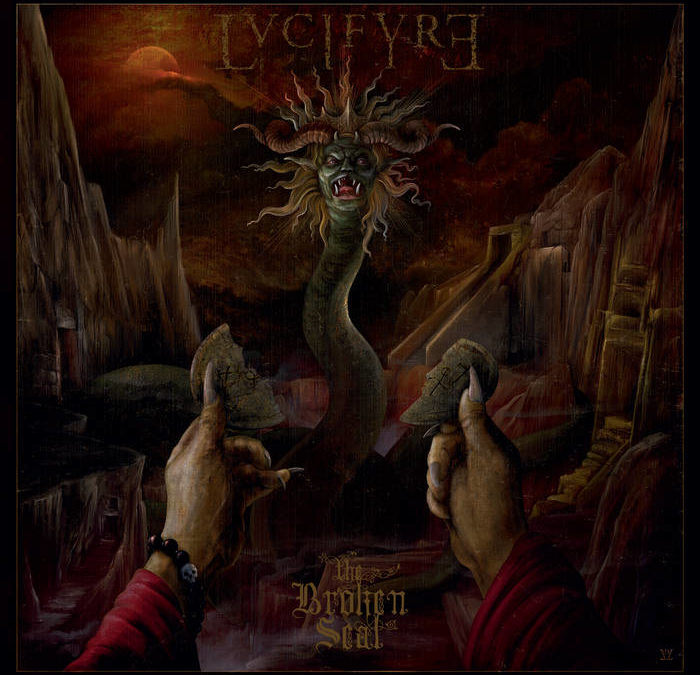 Black/death is something that doesn’t have as much to offer compared to other subgenres, or maybe I’m looking in the wrong places. In comparison, as much as I love raw/lo-fi black metal, there tends to be a mass amount being released at the moment. I could write a separate thing on that, but to stay on topic, back to black/death. When you do find that album, hold on tight and get ready for a shredding nightmare that you gladly hope becomes a theme in your sleep schedule. Lvcifyre was a for a sure bet when coming to exactly what I’m looking for in the genre, but I didn’t know it was going to be this good, and it would soon become one of my favorite albums from this year. Pleasant surprises like this are always welcomed.

The Broken Seal comes right out of the caves of Hell to bring us a hellish journey that doesn’t lay off the pedal for anything. Like a black locomotive train rushing through the night, this journey is steadfast and will take the will of God to stop it.

The drumming sounds like the guns and bombs dropping that shed blood as the nuclear holocaust draws near. Blast beats and your occasional groove will light the sky with flashes of lightning and thunder as it brings you to your final destination. One thing that draws me to this subgenre, in general, is the monstrous drumming that swallows anything in its path. And again, that’s something I knew Lvcifyre would deliver.

The guitars slither and slide as serpents make their ever-extending domain prominent and clear. The one thing that really jumped out and  showed me that this album might be their best to date was the guitar work and writing on both sides. Plenty of solos, whammies, and dueling can be heard in every variation, as we have a lot of great riffs and moments that shine throughout. I always liked their other stuff and was excited about this release, but the music that is written this time around, especially the guitar work, makes this one incredibly special to me.

The rumbling groove of the bass guitar makes its songs heard like the roaring waves that crash over the earthly barriers that try to save life inland. Let the destruction come as we’re all brought to our doom. Plenty of times the bass shines and shows the earthly sound from beneath that will be ignored at first but will bring the most damage and substance. It’s the glue that holds it all together. Just as it can save us, it can kill is just as easy.

When people thinking of the end times and the apocalypse usually a fiery background with tornadoes, plenty of death and destruction, and an impenetrable sense of ruin is present. Imagine if you will trying to focus that terror and mankind-ending sense of devastation into a vocal delivery and you will have the growls and screams that are forced upon you on this album. There are moments where the silence of death can be heard, and if you listen even closer there will be a couple of moments of divine whispers that seal the deal.

All in all, this album is almost too much bad-assery for me to handle. It’s one of my favorites from this year and it will end up pretty high on my AOTY list. Good job lads. You represented your name, your label, and your scene well with this release. Keep up the great work, the passion and channeled focus that you guys put into this is definitely not going unnoticed.

The Broken Seal was released on September 10th, 2021 through Dark Descent Records and is available digitally, on CD, cassette, and vinyl. Make sure to pick up a copy and to give this band/label a like/follow/subscribe because this label is one of the best in the game right now. I’m not just saying that, I wholeheartedly mean it. The second I saw this album in my inbox with the promo, I messaged Hayduke and called dibs, lmao. It be like that sometimes.