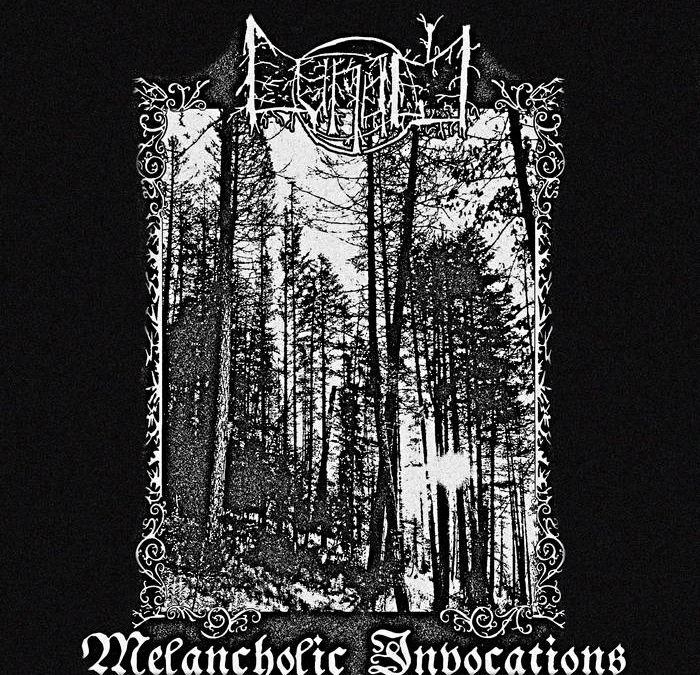 Lunacy, hailing from the Pacific Northwest, is a one-man force of nature. Z weaves together a spell of devastating, forlorn pain with a small flame of everlasting hope through the dual medium of raw and depressive-suicidal black metal. As Z states in the interview below the Bandcamp link, it starts with the riffs, and his riffs are well formulated for the task at hand. The riffs lay their full weight on you through production that bleeds fractured guitar fuzz, yet lets the strength of said riffs somehow still shine clearly through. On this EP, S.C. from Ebony Pendant handles drum duties, fleshing out the patterns created by Z for his Melancholic Invocations. The heavy pull of the bass and the melancholic envy of the ambient touches and interludes serve to round out the full picture.

Melancholic Invocations will be released on cassette by Realm and Ritual, promising a quality physical product down to the last detail. This fourth EP by Lunacy travels down dark pathways into the core of emotion. The music, whether frantic tremolo riffing over furious blasting, or mellow dungeon synth interjections, all has that common denominator. The passion behind the project is clearly real. The final product is gripping, painful to behold, and wonderfully cathartic. At nearly half an hour across six tracks, the release does a masterful job of balancing the timing for this kind of deep emotional dive.

After you press play on this dark journey, jump below the Bandcamp player and read my full interview with Z.

Hayduke X: Tell me about the beginnings of Lunacy. What prompted you to start this project?

Lunacy: It started when I was in high school and first discovered black metal. It was music that really spoke to me, and I’m the kind of person that can only enjoy something if I can do it myself so I set out to make a demo. I just used a 1×4 practice amp, one microphone, and my old drum kit and that was it. To my surprise people actually bought it on bandcamp which inspired me to take things further. I soon began to put all I had into the project and it became a huge emotional and imaginative outlet for me.

HX: Oh, cool. That spurs all kinds of questions, but let’s start with what bands first drew you into black metal.

Lunacy: It wasn’t until I heard Darkthrone that I really understood what black metal would come to mean for me. The primordial dreariness of Transilvanian Hunger spoke to me in a way no other music had even come close to. I saw how black metal could really draw out one’s unconscious in a sort of liberating way. I also moved through a big DSBM phase with bands like Silencer, Lifelover, and Xasthur, although recently I have returned to the more primitive stuff like Mutiilation, Ildjarn, and Judas Iscariot.

HX: Had you had other musical/band experience before launching Lunacy?

Lunacy: Oh yeah, I’ve been playing music in all different styles since I was like five years old. I have an active ambient/experimental project that I won’t disclose for the sake of keeping the two separate, but I make music of all different kinds. Lunacy has definitely been a main focus for the past few years though.

HX: What’s your writing and recording process now? Is there an instrument you start with, for example?

Lunacy: It always starts with a riff. If you don’t have a riff, you don’t have anything. Usually I will write out the main guitar part first and then go back and overdub different melodies on top of it. Then I would usually record drums, but for this record I got my friend S.C, the mastermind behind Ebony Pendant, to record the drums for me. This meant I wrote the drums out electronically as a guide for the actual recording. After the guitars and drums are recorded, I will typically record bass parts and then move on to the vocals, which I usually record through a cheap headset I bought at Goodwill. Finally, I will move more firmly into the production side of things which includes adding background synth textures and mixing until I have something I am happy with.

HX: How long does that all take? What was your timeline for Melancholic Invocations?

Lunacy: All in all this one took about six months. I usually end up getting obsessed with whatever I am working on, which certainly speeds things up.

HX:b Makes sense. And I can’t argue with the results. Talk to me about lyrical and thematic elements on this album.

Lunacy: This album tries to express a timeless sorrow, a nausea that has been present for all of time. Rather than talking about explicit themes, I want the music to invoke those very feelings in the listener. It’s about feeling alone with the knowledge that things aren’t going to get any better.

HX: That’s a pretty dark view of reality. Very hopeless. Is that your view or one that you express in your music for catharsis? Something else I’m missing?

Lunacy: I guess somewhere in between. I am pretty constantly torn between pessimism and a more hopeful outlook, between Schopenhauer and Nietzsche. Lunacy is definitely an expression of the darker perspectives, with an emphasis on catharsis. There is much beauty in the hopeless and dreary, and I think art is the best way we can redeem the worst aspects of our life.

HX: Very well put. I think that’s certainly part of my worldview as well. How did you end up working with Realm and Ritual?

Lunacy: Realm and Ritual reached out to me after I released my second EP Todestrieb about releasing on tape. This was a huge step for me at the time because I’ve always been really into physical releases. From then on, Realm and Ritual played a huge role in making Lunacy what it is today. S.G is a great guy and does so much  for the underground community by giving artists a platform.

HX: Yeah, the Realm and Ritual releases always look so cool. Did you work on artwork, layout, etc together?

Lunacy: I do all the artwork myself, but they do help with finalizing the tape layout. I like to be in full creative control, and that includes the cover art. Even if it’s not the highest quality, I care more about bringing something into the world that didn’t exist before.

HX: How did you create the cover image?

Lunacy: It’s a picture I took while on a hike in Montana that I edited with a free photo editing software. The border was designed by a more talented friend of mine.

HX: Realm and Ritual releases artists with Leftist beliefs, whether or not they show up in the lyrics, as far as I can tell. Does that fit you as well?

Lunacy: Yeah absolutely. Capitalism is the great world-sickness. It has led to an overvaluation of the lowest parts of life while grossly undervaluing those things that make life beautiful. It has led to our alienation from nature, ourselves, and each other, and I think it constitutes the great enemy of our time. Additionally, fascism is an ideology for weak, mindless sheep. It is completely counter to the black metal ethos.

That being said, Lunacy will never work with or be associated with mindless nazi scum. I had to turn down an offer for a vinyl release of my previous album because the label had previously released NS bands.

HX: Well said and I’m glad you take a stand on who you work with.

What’s next for Lunacy? Do you jump right back into creating new music?

Lunacy: It will probably be a few months before I start working on new Lunacy material, but I do have a few riffs I have been tinkering with since I finished Melancholic Invocations. I am always in the process of making new music of one kind or another

HX: Any last thoughts for our readers? Anything I didn’t think to ask about?

Lunacy: Not really, other than thank you for these great questions!

HX: Thank you for your great answers! I appreciate your time.