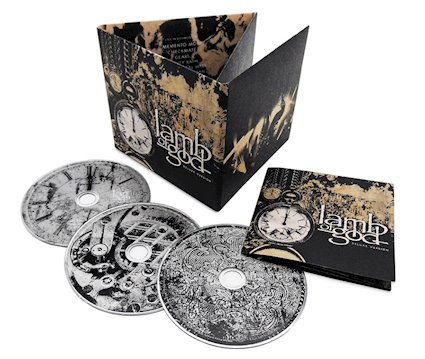 A super special deluxe release of Lamb of God’s latest self titled album has been unleashed upon the masses. How does it go? Is it worthy of purchase? Why do some ducks head in a certain direction in winter and others do not? I can only answer two of the above..

“Lamb of God,” (June 19th, 2020) to me, is a very important release. The band have been through a few issues, and some of them would have sunk a ship..The loss of a certain Chris Adler after the somewhat underwhelming “VII: Sturm and Drang,” would seem to the fan a huge blow, but when released, Lamb of God proved that they could rise above it, simply by going back to WHAT THEY DO BEST. And what is that.. So many questions..

I see them labelled as “Groove Metal, Metalcore” and all other types of bollocks. I found them around the “As The Palaces Burn” stage (2003), when to me, metal had been a bit boring for a while. I’ve been in since the early eighties when I was a mere ten year old, and my god some good shit was released, and you know the bands, I need not mention them. Death and thrash metal became my shit later on, after my cadetship with the likes of Priest, Maiden, Sabbath, Accept, and then it just seemed to stagnate.. Along came a bunch of plucky fools, with a dude that looked like he was VERY confused about what he wanted to be. They laid down riffs of monstrous proportions, with a kick arse bass player, and a bloke that could even be compared to the mighty Dave Lombardo on drums, and if I mention the dudes on guitar, I will almost weep with pride to know they even exist.. Let us call them Mark and Willie, and if you can out riff these two, may MY palace burn.

They hit their peak, for me, around “Ashes of the Wake,” and what a fucking cracker it is to this day. Not a bad song on it, and I dare you to say otherwise. The ultimate of all things, the greatest height they would ever hit, with 2009’s “Wrath” coming a close second, for me. Sure “Sacrament” was a cracker, but it had moments of weakness, and the other two were and are just pure intent for mine, that intent being showcasing just how fucking good this band can be and laying a very large boot into all and sundry.

“Sturm” was a total drop of the ball to some, a defining moment that made the fans shit themselves and think that this band could never be what they were again. Randy had stopped drinking, other shit happened that was out of their control, and they just were NOT what they have always promised to be. Seriously, live, no one could touch Lamb of God, as far as professionalism goes, and I’ve seen them blow away MANY a big band.

Lamb of God on “Lamb of God,” haha, bring back that promise. From the start of “Memento Mori,” you may just think “bloody hell, here we go again.” And then the song starts, and you think, “I’ve heard this shit before..” Then you realise that Randy is back, in full form, and the new drummer Art Cruz, is not just a mere replacement for Chris Adler. You realise he FUCKING OWNS the joint. And this is one of the weaker songs on the album.. What we have here, to me, is a return to form, and songs like “Gears” will prove that they have indeed moved into another gear. “Reality Bath” contains some of the finest bass lines ever written, and then also wants to punch you around the face a tad, just lightly. You WILL feel it. The new world order demands it.

“New Colossal Hate,” sees Lamb of God back in “Wrath” territory. Brutal, dark, and vicious. How can any metal fan resist this. “Oh fuck no dude – they are ‘Core,” and yes, anyone that says that is as dumb as a few of our current people in or around power circles saying they “won” their last election fair and square. Funny I said that. “Resurrection Man” is the next one. Power is on display, righteous power, not an ounce of bullshit to be had. Nothing fake, nothing manufactured to lead you astray, nothing but brutal honesty and integrity. Lamb of God as we the fans truly know and love them.

I could go on, but you’ve no doubt already got the original if you’ve read this far, so I’ll get into the bonus track “Ghost Shaped People,” and in typical fine fiery form the band asks you to challenge yourself.

“What will you believe?

Who will you betray?

What’s the cost of victory?”

Poignant, and relevant stuff in this day and age, and then to keep that ball rolling, they add a second bonus track “Hyperthermic/Accelerate,” where we are told in no uncertain times that “War is dreaming of itself,” which will no doubt lead to “The end of everything.” The current climate the world over feeds these dreams, as we see over and over as time progresses…

Both killer stuff, and now we get to the live stuff. I’ve seen Lamb of God three times. Yeah I don’t get out that often compared to some, but EVERY time I have seen them live they have wiped the floor with any band that has dared to take the challenge and tour with them. Yep, they made Metallica look like a giant sack of crap (many may say that’s not hard these days), when they toured Australia together. The biggest problem was that many didn’t come in while they where playing and bother watching Lamb of God fucking destroy the place! In smaller venues they have been simply crushing..

So what you get here is a recording of their first live stream in Richmond, VA back in September of 2020. Yeah, okay not in front of a crowd and you couldn’t go, but as good as we can get for live at the moment, and as always they bring power, precision and perfection to what they do. They are even kind enough to perform a few old favourites. “Contractor” (“Wrath” – 2009), “Ruin” (“As the Palaces Burn” – 2003) and “512” (“VII: Sturm and Drang”), along with the song “Death of Us” from the “Bill and Ted Face the Music” Soundtrack (2020). So, the whole album, plus a few extras, all delivered with such energy and professionalism that one would almost think these guy’s had been doing this for a while… They have, this a fact, and it shows that they just keep pushing themselves above and beyond as far as I am concerned.