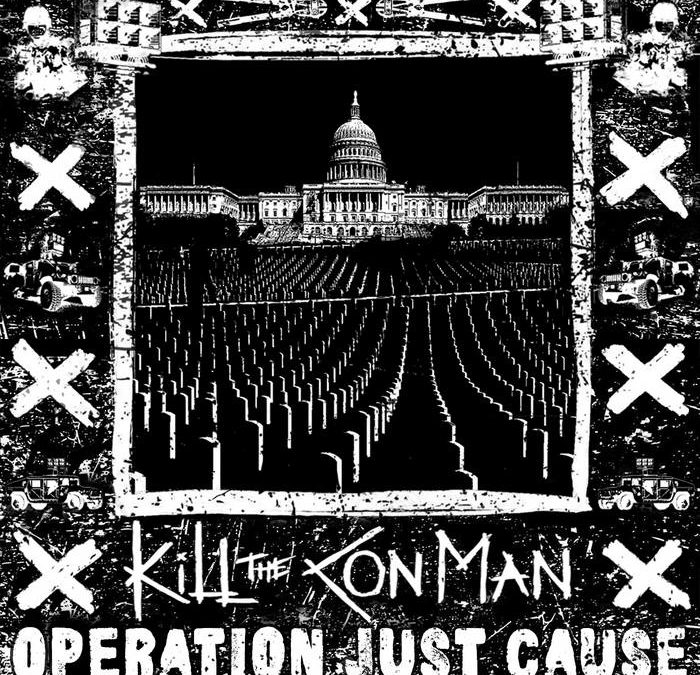 Just this past week, I connected with Riot Ready Records. I’ve been looking to bring more grind into my writing mix and by the serendipity of a Facebook group thread, we discovered each other. Label owner Wesley Richards promptly sent over three releases from the label. This twelve song, twelve and a half minute ripper of raging deathgrind is the first to get played, and I was immediately thrilled with the result. Operation Just Cause bangs hard by going straight for the jugular and never letting go.

As I understand it, Richards writes and records all of the music for Kill The Con Man himself, but there is a live lineup of himself on guitar and vocals, June Belford on bass, and Nate Williams on drums. In reverse order, the drums are impatient, driving, and creative. Occasionally it sounds like a drum machine might be used to get the speeds on display, but that would be supplemental, not primary. The bass is the thundering thread of anxiety rumbling through the whole album. The riffs are urgent, slashing and burning the listener’s mental landscape. Vocals are varied with quality highs and lows, growls and shrieks, and even hardcore punk chants here and there straight out of the mid-80s.

Lyrically, this album is rife with urgent messages from the left. A fellow anarchist, Richards takes on everything from police brutality to capitalist oppression, and much in-between. For example, the lyrics from Patriots starts with this verse:

Defenders of nothing exceptional

Conviction to a made up history

Guardians of a fake victory

Solidarity, my friend. Keep raising your voice. The final analysis of this album is that it’s part of the red hot ember of the left. If the world keeps fueling this fire, will it burn out of control? Perhaps. Regardless, this album is worth at least an hour of your time. That’ll give you five spins!