Kaliya – Born to See, Bred to Hate, Led to Destroy 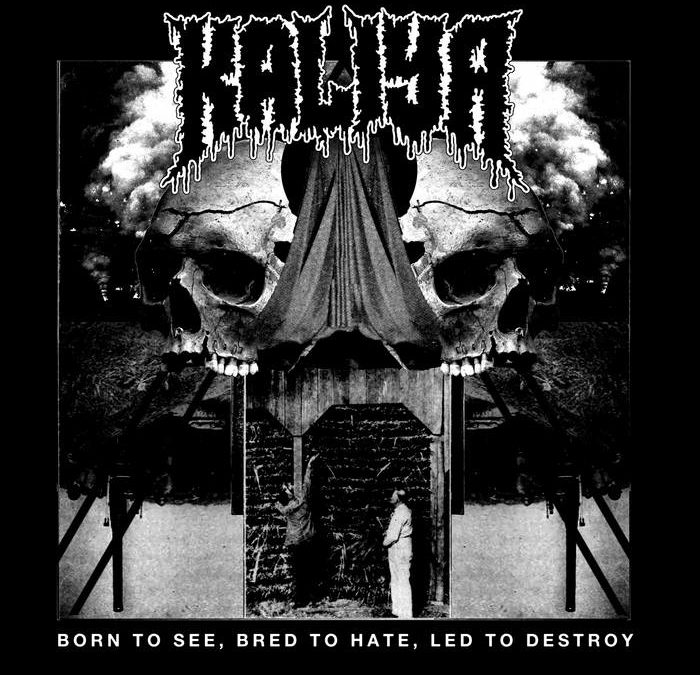 Album – Born to See, Bred to Hate, Led to Destroy

In their decade plus career, the Dallas quintet have created a pitch perfect balance between death metal and grindcore, making this third full length an exemplar of the fusion genre. Though the two styles have long been connected, there are notable differences. Kaliya have taken liberally from both without relying too heavily on one or the other. On the death metal side, you have the buzzsaw guitar tone so prevalent in OSDM. I would guess that there’s an HM-2 pedal in the mix somewhere. That said, the tone is not overpowering, as is the case in too many bands using it right now. It is clear there are other tones in the mix.

Another clear indicator of the death metal side of the coin on this release is the primary vocal style. Specifically, a low growl is used, very much in keeping with what is common. Vocally, the grindcore side makes some appearances too, when at least two other recognizable styles are used, both higher yells or screams, sometimes at the same time as the death growls.

Pacing and drumming are two other aspects that show both sides of the genre coin, and since they’re tied together (rhythm drives pacing), I’ll combine the discussion here. The tracks naturally flow between a slower paced death metal style, driven by percussion techniques typical for that genre (or even rock drumming), and frantic, blasty grindcore speeds. What I find especially great here is the flawless way they flow between the two, both from song to song and even within tracks.

Lyrically and thematically, Born to See, Bred to Hate, Led to Destroy is all grindcore. Like many in the genre, Kaliya shine a light on many of society’s ills. This is no punches pulled political commentary, which, of course, has long been the standard for so much grindcore. Consider the following from Bad News as an example, and then spend some time with the lyrics as you digest the album:

In everything we read our minds begin to sour

Independent thought is the only thing that’s true

But they will stop at nothing to keep this from you

To say that this album is both burly and aggressive is to grossly undersell it. Born to See, Bred to Hate, Led to Destroy is like the lovechild of a monster dump truck and a Formula One racecar, with the key aspects of both. On this release, Kaliya can run you down with speed, rumble over you with power, and often does both simultaneously. Behold the brutal velocity!