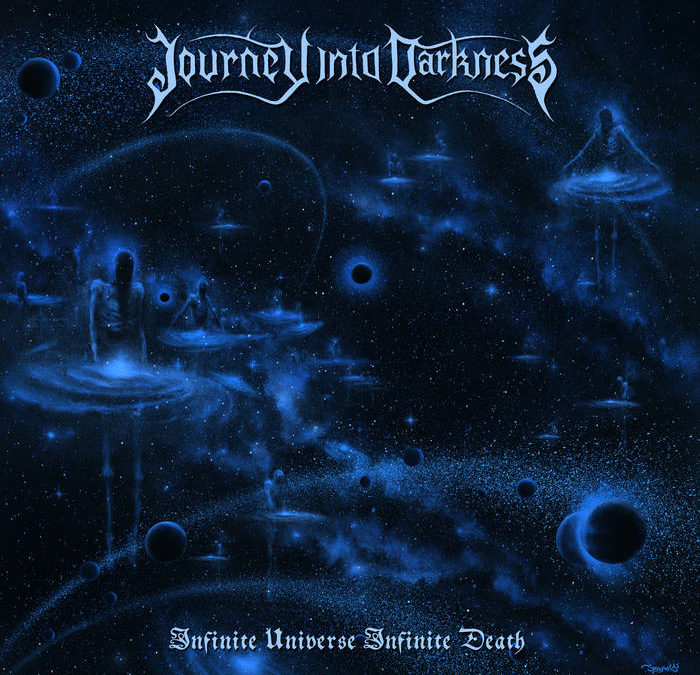 One thing that has seemed to calm down a bit since the 90s is well-done symphonic extreme metal. Back in the day, we had Dimmu Borgir and Cradle of Filth in their prime. Add, Anorexia Nervosa and Old Man’s Child in the mix and we’re now cooking with gas! Nowadays they don’t carry the same flame that was once prevalent, but some bands have done a great job of making this specific combination work. We have …And Ocean’s striking comeback album from last year, and the year prior we had a surprisingly well done and well composed debut from Belzebubs. You can now add Journey Into Darkness into the discussion.

Returning with its sophomore release Infinite Universe Infinite Death, it’s like they haven’t even skipped a beat from their 2020 release. This project is new to me in the sense that it’s been established since the 90s. In 1996, their debut release was nothing like what we have today. The debut release is a somewhat dark ambient/ heavy synth-driven work of art. It’s quite enjoyable, and I can’t help but picture it being a dark/horror video game soundtrack. Skipping forward twenty plus years, we are given the behemoth release Multitudes of Emptiness. This is when the band caught my eye. I was stunned at how much I like the album, and how much I miss that symphonic black/death goodness when it’s done right. Now, getting back to the album at hand,

Infinite Universe Infinite Death is a more focused, a much more sculpted sound of what we were introduced to. The production and the guitar tone are spot on for what you should be aiming for in this specific subgenre, and I didn’t even know it until I heard the album. The guitar tone has a full, well-rounded sound instead of your normal crunch that guitars tend to have in extreme metal. The sound choice for the synth, which changes up every so often but not enough to keep you guessing, is right where you want it to be. I envision that the creator of the music knows exactly what he likes about the sound and can comfortably transcribe that to recordings. It’s a lot easier said than done. Have you ever had a beautiful picture in mind, try to draw it to the best of your ability and it doesn’t look anything like the mental picture? Yeah, it doesn’t seem like he has that problem.

One thing I want to praise before it slips my mind, I love the vocals and the mixing of them. Depending on what you’re aiming for the vocals can be mixed in an infinite number of ways, but with the vocals here, we have something that commands and attacks as well as allowing all of the inputs to shine as well. Powerful lows, ferocious highs and when blending together we’re giving a force to be reckoned with! Thinking about it actually, as mentioned above with the mental picture, I seem to have that problem with writing reviews. I have a colossal speech about the album, but to put it on paper is another story. Brett, how do you do it?!? Take a journey in the Infinite Universe, let the synth/keyboards be your spaceship as the guitars, drums, and vocals paint an unbelievable picture of what space has in store. Take in the chaos, the violence, and the noncognitive mayhem that is space!

Infinite Universe Infinite Death will be released through Spirit Coffin Publishing on September 10th, 2021. This stunning release will be available digitally, on cassette, vinyl and CD. Make sure to give the band and label a like and follow this insanely talented musician for future releases. You won’t be sorry, that’s my guarantee to you.