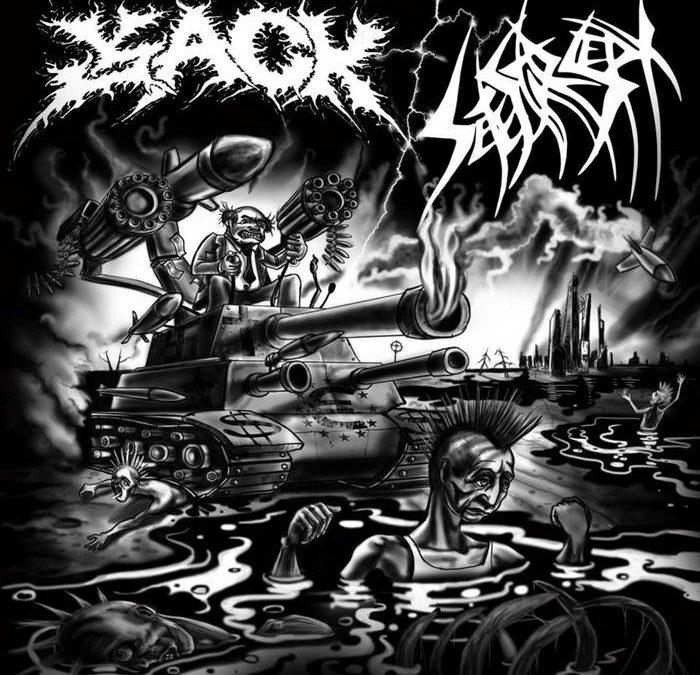 Featuring two bands from different sides of the world, this 7” split shows that grindcore is alive and well in 2020. While Jack is new to me here, I’ve been at least peripherally aware of Sete Star Sept for a few years now (thanks Dylan). This release is further proof that I need to dig deeper into their discography and if Jack’s four tracks are any indication, I need to do the same with them.

Side A of the split features four tracks in about four minutes from the Hungarian grinders Jack. The quintet plays the more traditional style of the two bands on the split, with ripping crusty riffs, rapid fire vocals, plenty of blasting, and crunchy low end destruction from the bass. Guitar tones sound like they may have some HM-2 going on in the mix. Well composed grinding fun with a fairly traditional approach.

Flip over to side B to find Sete Star Sept from Japan. The bass and drums duo have a more deconstructed approach across their five tracks (also about four minutes total). The rhythms are more spastic, jumping around versus holding consistently steady. Not off rhythm, mind you. Just not traditional. The howls and shrieks in the vocal attack play to good effect over all of the low end destruction for the drumming and bass riffs, which just bleed feedback all over the carpet.

This release is a highly recommended (by me…right now) split between two bands showing different takes on the style. Both sides are excellent, grabbing me with their abrasion. I personally prefer the weirdo noisecore of side B, but that has more to do with my own tastes than quality, as both sides are worthy.