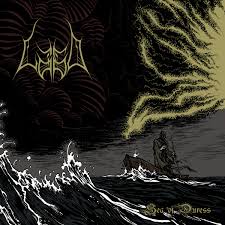 If you haven’t heard Sea of Duress, released earlier this year, you are missing out. It’s one of the nastiest, most dissonant slabs of death metal you are likely to hear. I caught onto these guys way back with the release of Tyranny in 2014 (also well worth your time), and haven’t looked back since. Their latest though, takes them to a whole other level. Towards the end of 2018, I caught up with Cole Jacobsen (guitars, vocals) via email to answer some questions. Read on to see the responses.

Hayduke X:  What is Lago all about?

Cole Jacobsen:  There isn’t any sort of mission statement or theme really. Just four dudes making death metal and always trying to expand upon the last thing we wrote. Other than the 25 minutes or so that we play live during a set we don’t take ourselves (or anything for that matter) to seriously. We don’t make any money doing this. It’s a labor of love. Something we all enjoy.

HX:  How did Lago start?

CJ:  It really started as just a jam session in the fall of 2009 with our original drummer Shawn. He had been in an older band of mine in 2003. I had a couple months left before I got out of the Marines and I was driving home on the weekends from California and I was really just bored. I wasn’t looking to start a band at all. We slowly started having a little more fun with it so it turned into an actual band.

HX:  What are your key musical inspirations?

CJ:  For me personally I’d say Trey Azagthoth from Morbid Angel. I’ve always said that I’ve been ripping him off for years. With the later releases from Lago, I’d say a lot of the inspiration came from Luc Lemay from Gorguts. I think like Luc, I’ve really tried to progress our writing with each release. Though our early stuff is still fun to play I don’t think I could write those same style songs and riffs over and over again without feeling bored.

HX:  What about non musical inspirations?

CJ:  I hate to sound like a an asshole by answering a question this way, but I find it hard to become personally inspired by other things or people that I don’t directly know. I think family and friends inspire me. And maybe it’s going about thinking things through the wrong way but criticism or negative shit inspires me. Telling me I can’t do something makes me want to do it. So yeah… outside of music there aren’t any specific people, outside of family and friends, that really inspire me.

HX:  The album Sea of Duress came out in June. How has it been received so far? Does the album meet your expectations?

CJ:  It’s been very well received. We’re still getting people that are surprised that we were picked up by Unique Leader Records. We’re probably our own worst critics are far as our own music meeting our expectations. I was happy with how it came out, but there’s a lot of things I think we could have done better. The little gripes we have just give us things to work on with the future releases.

HX:  Tell me about your writing process.

CJ:  Generally, it’s just Gus or myself getting a few riffs together that are the meat and potatoes of a song, and we kind of write based off of those. With Sea of Duress, Gus and myself wrote two songs completely on our own which was a first. But I think you can’t even tell, so it goes to show that Gus and I are basically on the same wave length at this point with writing.

HX:  What’s the scene like in Arizona? I don’t know too much about what’s going on out there.

HX:  How long have you been with Unique Leader? How did you connect with the label?

CJ:  We signed with them in February of 2017. Erik Lindmark contacted us personally. Matti Way, who works with the label, was into us and showed Erik and he really liked what he heard.

HX:  What lyrical theme or themes are present in your music?

CJ:  I don’t know if we have a concept so much. I feel like a lot of our lyrics straddle depression and ways to cope with it and just the rigors of life. Also their are some political undertones as well. I wouldn’t say we’re a political band, but our roots are in punk so those ideas certainly present themselves.

HX:  What’s next? Are you writing new music already? Is there any more touring in the works?

CJ:  I just got out of a sling after two months due to shoulder surgery so we’ll start writing here in the near future. Not sure whats happening for touring in 2019. We do have some fests that we haven’t announced that we’ll be making appearances on though.

HX:  What else do you want my readers to know?