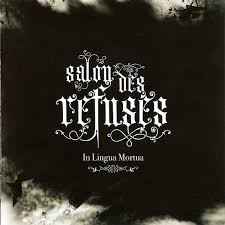 Ok, so let’s start from the very beginning.

In Lingua Mortua is a project by multi-instrumentalist Lars Fredrik Frøislie, most known in the progressive rock circles for his contribution to such successful classic symphonic bands as White Willow and Wobbler.

In this extreme metal project he is accompanied by many instrumentalists and vocalists, including his White Willow band mate Jacob Holm-Lupo,  Jørgen Munkeby (Sax player for extreme black jazz metalers Shining, from Norway), Niklas Kvarforth (from the other Shining, the Swedish depressive black metal masters), Thebon (from epic black metallers Keep of Kalessin), Ketil Einarsen (Jaga Jazzist), among many others. So the first question though, before even start listening, may be related to wondering what this particular band sound like. Could it be a bizarre mix of all those bands? Well, the answer is majorly No!, with some well disguised exceptions here and there.

Salon Des Refusés had all the ingredients for becoming a classic in extreme avant-garde metal: it is heavy as a really heavy thing; it has those grasp vocals so characteristic of black metal; it has complete free jazz nuances on the sax, flute and clarinet playing; it has a thing for old school melodic death metal riffs and bombastic raw black metal drumming. It has all of this and then some, as the richness and background of the band allows them to intercept and undertake all their influences and playing knowledge ability into something that really not only defies categorization, but also challenges the listener in stepping into some uncharted territories.

The wide array of approaches and techniques, though keeping the sonic trip of the band in the most extreme corners of metal, does create a dense, crushing and claustrophobic atmosphere in which the listener is invited to experiment several emotions and states of mind, though all related with the aforementioned textures.

Even if expecting a sound somehow biased by a mix of symphonic prog and extreme jazz metal, the truth is that In Lingua Mortua sounds more like a journey to an imaginary soundtrack made by King Crimson, Emperor, Mayhem, Insahn and John Zorn all playing together in ensemble mode. There are some flute soloing Jethro Tull like and many sax attacks that mix the King Crimson and Norwegian Shining stylings.

Among all the heavy paraphernalia and the overall avant-garde black metal sense, the album also presents some tracks that rely more upon some old school death metal guitar playing and even singing, approaching the direct Massacre, the experimental Death or the technical (early) Coroner. This happens mostly in the background guitar riffing, as the listener is mostly driven to concentrate on the black metal vocals and sax, flute, clarinet and Mellotron playing that really transport the sonic trip into that avant-garde status.

This album is really a wonderful adventure for those who, like me, not only endure but especially enjoy the difficult art of transforming the most extreme and heavy forms of music into something fascinating, challenging and artful. This is something only at the reach of those who really know the walkabouts of jazz and prog while playing real, raw, aggressive extreme metal.

Salon des Refusés is, therefore, an album to play loud, replay even louder and simply enjoy its power and art. It is all here waiting to be discovered, you just need to have the guts to do it…but this is obligatory for the adventurous metalhead and for the eccentric avant-garde listener.

Nuno Lourenço is a hard metal fan since the mid 80’s that has never lost his track and still lives for his daily fix of extreme metal. He is so passionate about music in general and extreme metal in particular that he actually started playing and recording his stuff at age 43.