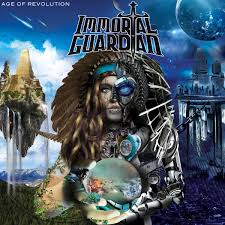 Wait, what’s this? Hayduke is reviewing power metal? Shouldn’t that say Mannerheim or Johnny the Fox under author? Nope. It’s true. Mr. “Only Extreme Metal” himself has been moved to write about some power metal. Actually, if you’ve been reading for awhile, you now I’ve always branched out occasionally, but it does feel like it’s been awhile. The reason for the timing of this review is simple. This album rips!!! I always try to give everything I receive at least 30-60 seconds of my time. There aren’t enough hours in the day to give everything a full album listen, so something has to grab me to keep me switching to the next, and it is certainly rare for power metal to do that for me. That alone is recommendation, as Age of Revolution has had double digits full album listens.

I suppose it’s time to quit rambling and actually talk about the band. Immortal Guardian is a Texas-based quartet. According to Metal Archives, they started as a Christian band, but have transitioned into political content thematically. It’s fair to say that the music itself caught me, but the lyrical content, especially as you get to Trail of Tears (track 4), really hammered the project home for me. I’m a middle aged white guy, but have long tried to be an ally to indigenous causes, so a song about the horrors of this exceptionally dark period of American history feels important to me. If you don’t know the history, I recommend a quick Google search and a few minutes of reading. The band has been around since 2008, but has only four prior releases, with Age of Revolution as their first full length.

Musically, the album is everything you want from your power metal. Major chords, rising action, near operatic clean vocals, all masterfully pulled off. Cody Gilliland handles the drumming with a mix of rock styles, including the necessary galloping rhythms for the style. On bass, we have Thad Stevens playing rock solid, interesting riffs. Gabriel Gardiola pulls double duty on guitars (waves of riffs) and keyboards (nicely placed in the mix to highlight the other aspects of the music). Carlos Zema proves himself an excellent vocalist, singing with power and range. Too many clean vocalists have neither and/or too hesitant in their delivery. Zema is top-notch.

This will never be an album that gets put on repeat for days. I’m too much into extreme metal for that to happen, but it’s notable that genre, not performance is my reason. Taken on it’s own, the album is pretty near flawless. When I’m looking for something more upbeat, soaring even, I expect this will remain one of a handful of go-to releases.

Recommendation – Do I need to say it? This is excellent! Go get it.