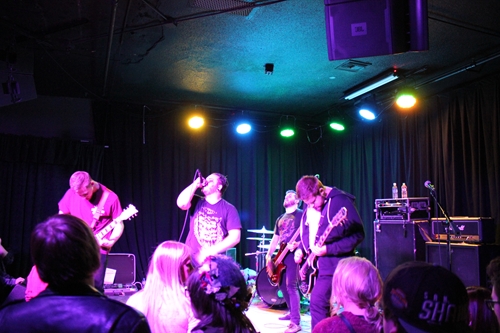 Round 3 of the Heavyweights at The Stache (inside The Intersection) on Feb 6, 2015.

In the final prelim round of The Heavyweights 2015 at The Stache, we again had a veteran HW band up against some newcomers. Of All We Cherish, HW veterans, showed they had what it takes to head to the finals again, along with Anchors Calling from Grand Rapids. While Look Left Swing Right hit us with some new music (and a giant new guitar rig) and Exitvia blackened our ear holes with something pretty fantastic.

This is an overview of the bands, with some video. My hope is to give you an idea of what the band is like, not necessarily review the show. I’m a fan, not a musician. – JenMPN

A 5 piece from Grand Rapids, Anchors Calling has a hardcore base, with some catchy stuff laced in there, almost a hardcore and metalcore mix with distortion in full effect. Their live show is better live than on the recordings on their FB page. I was impressed by the energy and the way they interacted with the crowd.

This was their first time in HWs and will be up against some veterans at the finals. But they definitely brought out the crowd and got the votes to easily take the number one spot in Round 3. Can they pull it off again for the finals?

Of All We Cherish – Winners

At the Heavyweights for the 2nd year, and making it to the finals for both, this 5-piece from Muskegon calling themselves Of All We Cherish will metalcore your brains out. They’ve got the catchy hooks and breakdowns you love, with screaming, growling and clean vocals all mixed in.

Drawing the Muskegon crowd out in force to pull off the votes needed to make it to the finals, can they take the whole cake this year?

Self-described as psychedelic hardcore, this 4-piece from Grand Rapids played the Heavyweights for the first time in Round 3. With new songs, and James’ new rig and 27-string guitar (ok, it’s like 9, but still), I’d say they have a touch of that djent sound too and take the breakdowns to interesting places, which is the psychedelic side of their sound. Along with the intense screaming, to the point where Carson looks like his throat may explode, the music is solid and you really need to see these guys. Check out the video for sure.

A brand new band playing their 2nd show ever at The Heavyweights, this 2-piece from GR as risen out of the ashes of other local bands to become something unique to the GR area. It’s a blackened, experimental metally sound with just enough vocals to be interesting, but a sound that definitely focuses on the music with tons of improvisation to their set. Even the old-school music snobs in the room gave them 2 horns up. Watch one song here on video, and hit up the MPN YouTube Channel for the full set (or at least most of it, until my camera battery died). You really need to see them live.

The Heavyweight finals are March 7 at The Intersection, and feature 6 of the best local MI Metal bands:

Essentia, Infinite Design, Seraphim, Society Kills, Anchors Calling, Of All We Cherish. See you there!!

Check out Round 1 Bands >

Queue up Round 2 Bands >

Find all the shows on one calendar >