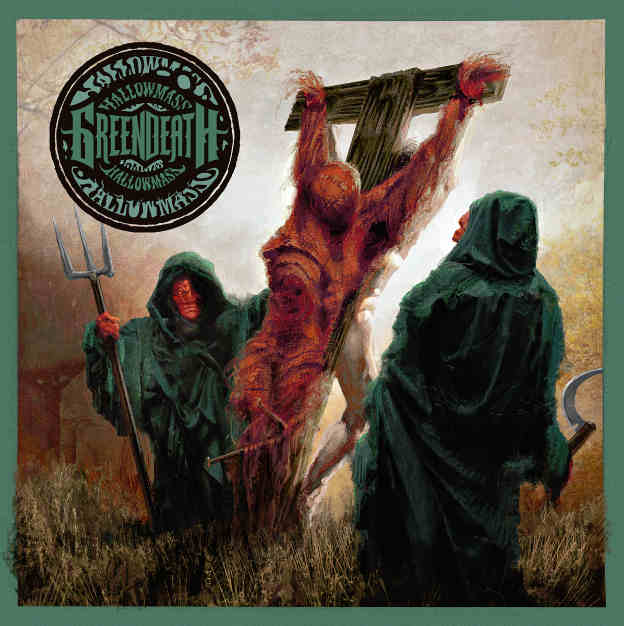 Sometime in the mid-90’s, thrash metal got boring. Either bands started thinking Led Zeppelin was their inspiration, instead of Motorhead, and made ham handed attempts at grandiosity, or they recycled the same riffs to the point of monotony. Groove was also the newest style, so perhaps I was just distracted by the shiny new toy, but I was nonetheless bored by album after album coming from the Big Four, and the Smaller Many as well. In recent years, thrash has been making something of a comeback, but too many of the new thrash bands have failed to learn from their forefather’s mistakes. There are, however, notable exceptions, both big name and small.

Let me present to you one such exception. Hailing from Des Moines, Iowa (not known as a metal hotbed, I’m sure), I give you Green Death. Though new to me with the release of Hallowmass, Green Death have actually been kicking ass since 2012 and have two prior full lengths among a handful of other releases. I’m no expert on the current state of thrash, but I know enough to think that means this quartet is a smaller name. I’m here to tell you, that’s a shame. Green Death rips…or doesn’t, depending on the song…but does both very well.

Across fourteen tracks accounting for about 54 minutes of music, Green Death play a style of thrash founded in the formative transition years of the genre. There is as much traditional heavy metal here as thrash, though they do go plenty dark and heavy on a few tracks. The strong rhythm section of Parker Willis (bass) and Ryan Berrier (drums) set the rock solid tone of the album. Whether firing at a rapid pace or slowing for a mid-paced rambler, the rhythm section drives this boat. But wait, we also have Mark Reinking (guitar) credited with some bass work. And,…what’s this?…vocalist Sol Bales also gets bass credit? I don’t fully understand how that all plays together, but seemingly the whole crew understands the importance of being rooted in a solid foundation.

Upon this granite foundation, the riffs build, weave in and out, wind together, and generally twist the tracks through their paces. Fist-pumping, head banging metal is the order of the day, not dissonant nightmares, but they do throwback so well. The composition of each track refuses to recycle tired riffs, but still hails the masters of the early days. As far as vocals go, Bales carries every note he needs to. He has strong cleans, delivered with passion and power. When he goes harsh, he gets even more visceral, drawing, it would seem, from deep in the core of his being.

Green Death are certainly throwbacks. Since they rip so hard, that’s all to the good. When you’re feeling nostalgic, instead of riding the lightning or running to the hills, grab Hallowmass instead. I predict you won’t be disappointed.