Gourmand – Blossoming From The Grave 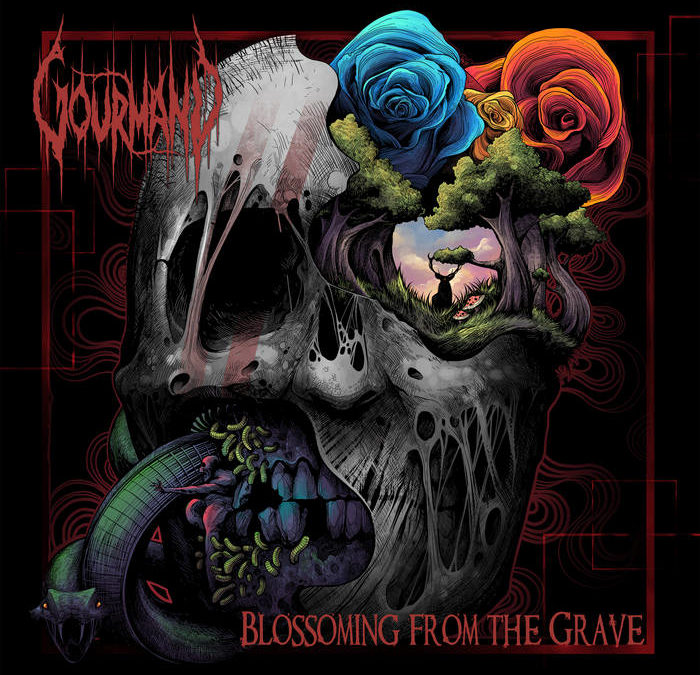 Album – Blossoming From The Grave

Way back in 2018, a colleague of mine reached out to discuss the possibility of writing a joint review. I thought it a great idea and we worked out some details. I would write the fictional story part, as I often do, while he would write the so-called regular review. After discussing a handful of options (our tastes are not always aligned), we settled on this magnificent album by Gourmand…and then I promptly dropped the ball. Life got busy and it took me months to write my portion. In the meantime, my colleague moved onto other challenges in life and stopped writing reviews. Sigh… So, instead of finishing the review, I promptly got busy again and left this in limbo for something like fourteen months. Anyway, here we go.

Blossoming From The Grave is one of the most interesting and unique death metal albums I’ve ever heard. Some of you may cry foul and list a whole plethora of other albums that you think should vie for that title, but I stand by my statement. What Gourmand do so well on this album is to seamlessly mesh weirdo, technical death metal with strange time signatures, bizarre riffs, and the like on one hand, and seriously emotional, passionate music on the other. These are two things I rarely find together. Part of it is exceptional use of the violin as a complement to the main ‘story’ the other instruments are telling. Part of it is the very real and recognizable passion that the quintet pour into this album. Part of it is the well placed guest vocals, a haunting female voice juxtaposed against the harsh and obliterating main vocals. Really both are obliterating, though in different ways.

Below, please find the story that I imagined as I listened. This was written over a year ago as I had the album on repeat. I’m not sure I’d write the same story now, but want to leave it as it was authentic inspiration at the time. Read on and LISTEN TO THIS ALBUM!!!!!!

Like clockwork, he woke up early every morning. Tick, tock, get out of bed. Tick, tock, shower, dress, eat. Tick, tock, kiss his wife goodbye, {…aahh…was this really it?  Wasn’t there more than this?…}  give the baby a hug, walk out to the car, back out, turn left. Daily life a steady march towards…what? On the surface, the man was cheery, greeting {Hi John, you smug bastard. No, I don’t really want to hear about you  trip whitewater rafting…} his co-workers on his way in from the parking lot. Smiling at all as he quickstepped over to his desk to start his day. He’d been here five years, with twenty or so more before retirement. All was well in his life. All was well…

Like clockwork, he woke up early every morning. Tick, tock, get out of bed. Tick, tock, shower, dress, eat. Tick, tock, kiss his wife goodbye, {…aahh…was this really it?  Wassn’t there more than this?…}  give the baby a hug, walk out to the car, back out, turn left. Daily life a steady march towards…what? He stepped out of his car, and was hit with an overwhelming wave of grief. Two weeks from now would be one year since… {…I miss him so much. He was my lodestone…} He sat back in his car again….heard his name called. Looking up, he saw John headed towards him {dammit!} talking about a poker night… Standing up, he plastered a smile on and they walked into the office together.

The man stepped out into the cool evening air. Slowly, he moved to the porch railing, thoughts in turmoil. He had thought this had been a good idea, getting together with family on the anniversary of dad’s death, {I miss you. It still hurts} Suddenly overwhelmed, he collapsed to his knees… And then his wife was by his side….He was being guided to the car…He was home in bed, staring at the blank wall….

Like clockwork, he woke up early every morning. Tick, tock, get out of bed. Tick, tock, shower, dress, eat. Tick, tock, kiss his wife goodbye, {…aahh…was this really it?  Wasn’t there more than this?…}  give the baby a hug, walk out to the car, back out, turn left. Daily life a steady march towards…what? He parked, stepped out of the car, {last night had been so hard} heard his name called. It was John again, giving him a hard time about missing poker night. “Where were you buddy? I cleaned up. Would have been great to take your money too.”  …his hand curled into a fist…his fist struck John in the cheekbone…and again…and again…and then he was being pulled off of John. He looked down at the bloody mess of John’s face as the man stirred and groaned… {What happened? Why is he down there? Did I do that?} With effort, he looked down at his own shaking, bloodied knuckles… Sirens sounded in the distance…