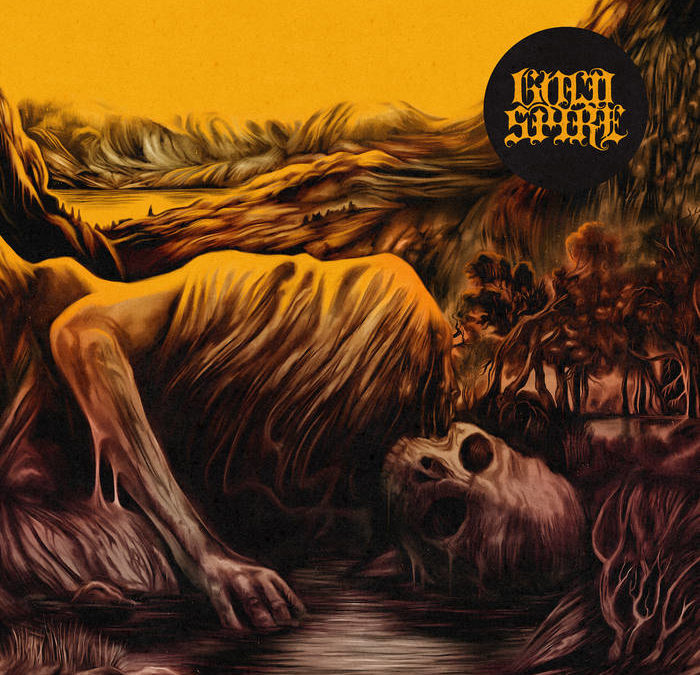 Darkened rainy days over here in western Michigan have turned out to be the perfect backdrop for this moody masterpiece by Swedish death/doom metal band Gold Spire. Gold Spire, set to release in early November, is a hodgepodge of dark and melancholic tones, chilling piano, and mystifying saxophone. The cover artwork, featuring hues found upon those soon-to-be crisping trees, was created by guitarist Påhl Sundström and is what first drew me in. That being said, I soon saw that this album had saxophone featured on it and I was then 300% on board before even listening to the first track. This album, before and after listening to it, made me even more excited for the coming fall. The songs have a touch of intrigue, desolation, and a sort of nostalgia to them (I blame Hobby Lobby’s music selection).

Starting off the album is a long instrumental droning that eventually flows hard into a deep rattle of a voice found on the second track. “Day Dawns Dark” begins with a sustained note from the saxophone. Layered atop it is light piano work and bouncing guitar that gets delicately buried beneath a churning electric line. This track, being the shortest on the album, runs right up into “Headless Snake,” where we are introduced to the vocals provided by singer Heval Bozarslan. The beginning of the piece slows us back down a bit with subdued piano, and a dreamy flute line is brought in. Drums rumble inward and the tension starts to build ever so slightly until the song snaps itself upright with snarling growls. The first time I heard this song, I physically reacted when the saxophone was put into place. I brought my hand up as if I were holding an imaginary wine glass and tilted my head to the side as if to say, “well, I’ll be,” as if I were a Southern grandmother. Absolutely delicious, I say! The saxophone is such a beautifully mysterious instrument and it truly helps to channel that indescribable feeling metal music provides.

Gold Spire’s Bandcamp states, “To keep the nerve in the songwriting process and urgency in the performances, they chose to invite musicians outside of the traditional metal spectrum: jazz saxophonist extraordinaire Magnus Kjellstrand and progressive rock bassist Petter Broman.” The sulky nature of the bass paired with the sharp whine of the saxophone is just completely and utterly enjoyable to listen in on. I cannot help but imagine David Bowie standing off in a plume of dust grooving along to the death metal enchanters that make up this splendid band. Of the album, Påhl Sundström says, “We wanted to not only push the envelope for the death metal genre but also to expand our own understanding of how different musical experiences and preconceptions can be merged to create a cohesive common ground. The main focal point here is not genre, or individual performances, or instrumentation – those are just vehicles – but rather the overall theme and narrative.”

The toss up found within this album makes me clench my fists out of delight. There are times when the music sounds red in the face, and other times where you’re belly up floating down moonlit rivers. The glimmering guitar work on “Gloria” sounds like water droplets racing themselves down window panes until they’re blown off by the swaying wind produced by the angrier-sounding guitar that cuts in. “Fetid Waters” is a hand around the throat with its gasping vocals and steady beat that pulses in time with the heartbeat you can feel beneath your fingers. “Husk of God” is shoreline sounds flitting out until overwhelmed by the longing, or perhaps confusion, that bubbles up with the saxophone… What I am trying to get across is that it’s good, so good, all of it, period.

Recommendation: Imagine Twin Peaks but every character is outfitted in faded band t-shirts and spiked leather bracers. I feel like I’m going to dream tonight.