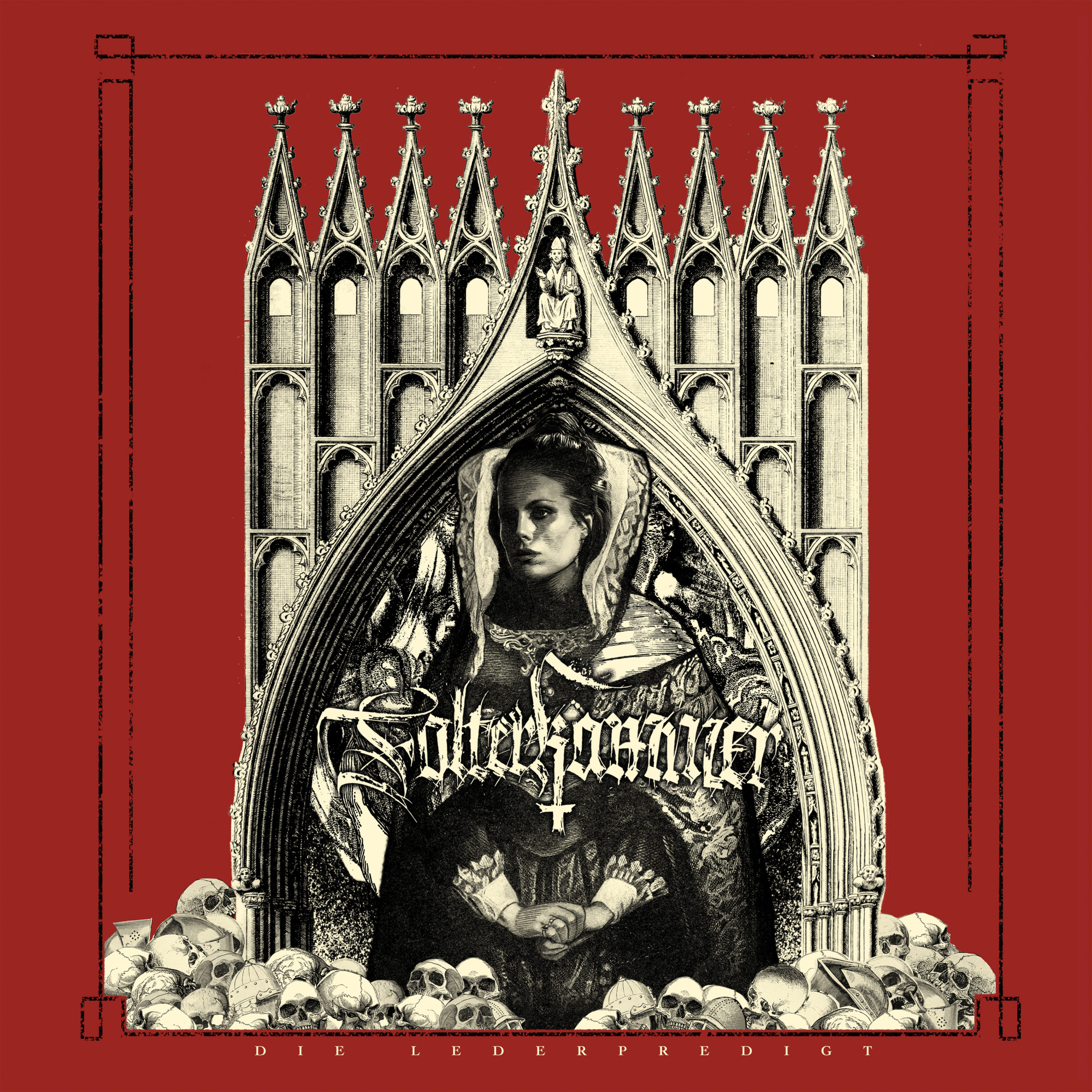 The blending of opera and black metal, two very dramatic and theatrical genres, has resulted in a project known as Folterkammer (Torture Chamber). Made up of members of both Imperial Triumphant and Darkmatters, Folterkammer’s debut album Die Lederpredigt (The Leather Sermon) was released on the 11th of December. It reads as a grotesque Silent Hill approach to an issue, yet the seemingly dark alteration of reality found here is reality. About the songs, singer Andromeda Anarchia says, “I wanted to take that picture of Holy Maria being so gentle and being protective – that image of what a woman should be like – and I wanted to get away from that. I wanted to look at the world and the way it is, not base it off of fiction, but of actual monsters that are human beings in the world.” The all-powerful voice heard on these tracks could be all of the horrible women that have existed throughout time – Elizabeth Báthory, Myra Hindley, Mary Surratt, Irma Ida Grese, Ilse Koch, and any other person found upon an unending list of truly heinous, despicable people. Anarchia sought to recontextualize what is known as the feminine power and warp it into something much more malevolent. The unifying voice among these seven songs will immediately paralyze you within a static web of terror. Even if you do not understand German, the language the songs are being sung in, imagining what this hellish superpower is inflicting upon the world is not difficult to do.

Die Lederpredigt begins with “Die Nänie (The Niece),” a track that opens with bellowing, deep organ groans and a voice that hisses out as gauzy whispers. Her voice becomes dejected, warbling up until it fully collapses into striking, full-on screaming. The whirlwind of tremolo swirling with sharp, high-pitched inhales and banshee screams creates a pleasantly chaotic sound. The rapid repetition of notes mixing with the sharp-edged vocals conjures up imagery of towering 15th century architecture going up in a blaze of bright orange as black smoke obscures the surrounding landscape; the flames forcing themselves into the intricate curves and wide corners of the façade. The second track, “Die Hymne (The Hymn),” starts with drums that sound like large clanking chains in the grips of some monstrous woman. Operatic purrs flutter up into the rafters as the melody crawls up and down, twisting what is typically a song of admiration toward a god. A chorus of threatening feminine voices enter onto the track in a wonderfully dramatic entrance as the sound of the drums comes down in wrathful torrents. Track three, “Die Elegie (The Elegy),” opens with a sublime ringing tone that wavers out beneath softly spoken words. The toll of a bell brings in a slinking bass line, and throaty vocals drift along the surface. Choral voices crop up behind the tremolo resulting in an especially sinister sound, as if some unearthly being is being conjured up before the masses. The next song, “Das Gebet (The Prayer),” has an abrupt start that sounds like a landslide carving its way down through a mountain; Anarchia’s voice is a warm wind gliding just above the mass destruction. Sharp snarls rip through the reinforced percussion. The power held within the voice is tangible, and it seems even the trees would bend to avoid being touched by the sound. “Das Magnificat (The Magnificat)” has a tormenting riff that ricochets off the steely pummel of the drums. This song has a bit more of a jovial sound than the ones that came before it. This track sounds like a menacing dance of festive praise with the retching growls joining with the operatic vocals in a twisted twirling around some unholy floor. “Das Sinngedicht (The Epiphany)” opens like the beginning of a sermon. An organ plays a rotating tune to capture the attention of the masses, and words are gently spoken over top of it. The keys move about in an almost suspicious manner until there is a brief moment where all instruments drop out. Then the drums come trudging in and a chorus chants in the background. The vocals move around in an unexpected, deranged fashion, and tortured screams are faintly heard. This track sounds like the horrors of the world were concentrated down into six minutes. Around the closing of the song, the riff begins to quickly slide up and down, sounding like someone clawing their way up out of a pit, but failing miserably, left to hopelessly slide all the way back down into darkness. “Das Zeugnis (The Testimony)” begins with a tremendously menacing and unnerving pulse. The organ squeals out a haunting tone, and the chorus moves along, fragmented, but steady.   Anarchia’s soaring, shrill yowls are torn away by foaming-mouthed growls. The rhythm moves like someone dragging their weight across the ground in a fevered hope to get to safety, to get away from some malicious entity stalking after them. The screams sound like someone being sucked into a whirlpool suddenly rising from blackest waters. The vocals are absolutely insane. Measured choral voices heave along with the slow trudge of a beat. Without knowing the lyrics to this piece, it sounds like a battle being staged against this monstrous, towering woman. You think she’s going to be killed off once and for all. She collapses in a mushroom cloud of smoke and ash as her otherworldly howls swirl around her, but as the dust and debris clears, she is seen beginning to grow even taller than before as the song reaches its conclusion.

Every song on Die Lederpredigt  could be the backing track for a final boss fight. These songs are composed with perfection in mind, despite drawing from the messy rawness of traditional black metal. The jagged thunder of blast beats and the whirring wind of tremolo bring a sound of utter and complete destruction, but the controlled operatic vocals bring in a blood red drop of beauty to the songs.

Recommendation: If you’re in the mood for vocals that inspire frightening images of eldritch horrors, then Die Lederpredigt is an album you’ll want to get your hands on.