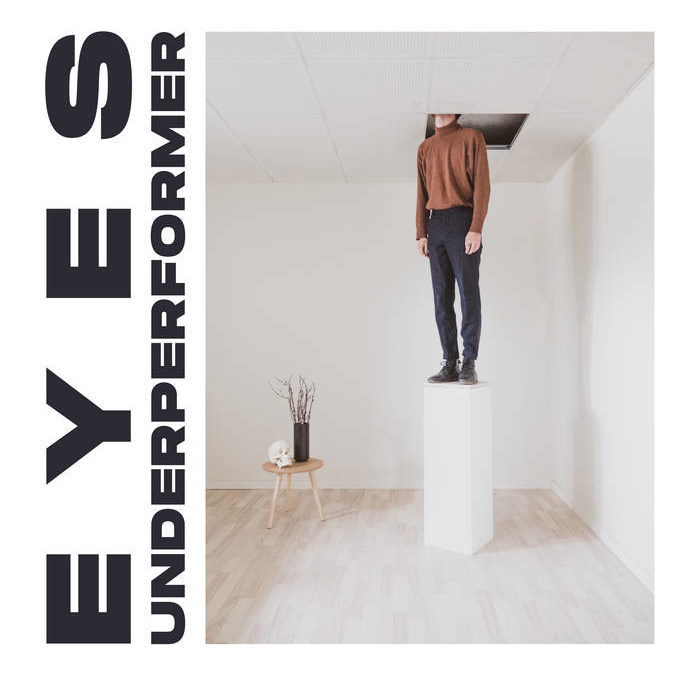 Danish hardcore band EYES has released a noisy masterpiece of an album – their debut Underperformer. Released on September 25th, these ten songs will provide a stellar soundtrack for when you find yourself sitting around, seething, and thinking about how much your own existence is “weighing down like a boulder.” It’s the sound of trying to come to terms with what your life has become. Underperformer opens with “Verge.” This track begins with a riff that plods along, growing ever so slower with each heavy, spacious boom from the drums until it takes off with enough force to cause painful whiplash. The lyrics seem to tell the story of every person stuck inside during quarantine:

Now it hides from the sun

Used to bring joy and laughter

Now it brings nothing at all

Hearts grow cold and callous as the days of isolation drag on, withering like “a small flower wasting away.” A flurry of drum hits cover the screams like a landslide, and the song ends in a swirling mass of prickly static sounds. The next track, “Distance,” comes in at full force, berating the ears with razor-edged riffs and a heavy-hitting beat. The riff chaotically shoots up and down with monumental force like skyscrapers tumbling downward and being built right back up again beneath a seemingly relevant 2020 thought of “Will I ever feel normal again?” Title track, “Underperformer,” starts out with a choppy guitar that stumbles along and picks up momentum as the bass and drums are added. The thick bassline is like something you would hear from the Melvins; it’s heavy, rigid, and menacing.

Reduce me to dreamlike existence

Walked down the path with least resistance

The riff behind this passage of words sounds as though the guitar is being haphazardly shaken out as various notes fall to the ground; a tangle of sounds one might hear on a particularly stress-inducing boss level. The lyrics beckon you to get down to the floor, lie on your back, and stare at the shadows swaying on the ceiling. This track devolves into a perfect low rumble as blast beats meld with the screeching guitar. The fourth track, “Choke,” begins with a fuzzed out beat that leads into a heavy, choppy bassline. The guitar spins out a line of flittering notes. A scream brings in a steadied pace as the lyrics are angrily tossed out.

Promised to give it back, but here I am

The trembling notes briefly return until we’re thrown back into a collision of noise with depressingly relatable words.

Embraced by sickness once again

Surrounded by them, time and time again

The guitar riff topples over into oblivion as life is being completely beaten out of the drums. “Choke” sways with the grace of a deer caught in a beartrap. The track fades out from a cluster of noise. In the next track, “Surf,” the drums heave along as the riff peeks out like a deadly whitecap taunting an undertow into the vast blackness of water.

They build me a concrete foundation

Crumbling as it weakens like clay for each day passing

The boom of heavy hanging notes fall and collapse into piercing, noisy riffs shivering above the shattering crash of the drums.

My home is my palace

My mind is in ruins

My body is my tomb

This song falls off into a slow trudge that stops briefly only to be picked by the immediate noise of the next track, “Off.” This song immediately forces you into an uncomfortable situation, like being caught in the middle of a crowd. Shoulder to shoulder, the tangle of limbs unyielding to your request for space.

Make your mistakes before they make you

Sit alone and rot away

These are the screaming sentiments for those that have found themselves staring at the wall, the unflinching mask of sadness in the mirror, or the hypnotic static of a late-night television screen. In the background, there’s the subtle sound of handclaps; a pair of hands for each accomplishment lost.

And try not to reach them

Light yourself on fire

This track begs you to get out into the middle of your living room to violently shake around. EYES truly make the most out of shorter songs; these tracks feel fully fleshed out and don’t leave you hanging or dissatisfied. Track seven, “Voiceswhispersecretsandspeakonlytruths,” opens with metallic tings, grumbly basslines, and squeals of feedback. The vocals cry out,

And speak only truths

‘Why do you put up with yourself?’

Around the one minute mark, the song de-escalates (in sound, but not in feeling). The retching yells, the measured tinny sounds, and the low growl of the bass paint a scene of confrontation – two individuals circling around one another, fingers twitching. From where you’re standing in the crowd, the blurry face of one man is seen from over the shoulder of the other. The pair slowly change places as you see that the face of the other man is the exact same face as before! It’s a desperate fight against oneself. The instruments explode back into full force as the scene fades away.

My stomach churning as I pass them by

I’m dead but I still survive

The guitar drops out leaving the drums at the forefront and everything becomes sheathed in a fuzzy layer of distortion that sounds as if the speakers and all of the sound equipment have been tossed into water. A muffled “enclosed in time” wavers out of the muck. Track eight, “Swim,” has the irritation and frustration of constantly being built up by others to be a thing of wonder, but time has eroded the fancy façade to show bare, unsteady pillars beneath.

Always told you’re meant to be one of the greats

But it was founded in nothing at all

The platform is washed out from beneath you.

Swam with broken arms towards the horizon

Couldn’t even be adrift if I tried

Wouldn’t even die if I drowned

A pouncing riff is set alight above stuttering drums. This song seethes with exasperation, and the heat from the anger floats along into your head. The next track, “Victim,” rolls in like a flash flood, forcing you along as it swallows up the streets. The lyrics scream of some useless human being who is never held accountable for their wrongdoings.

You’ll see if you divert your gaze for a second

No one but yourself caused this

The tossup of the drums stumbling beneath glaring riffs that climb up and up adds to the chaos.

No one but yourself caused this

They started the fire

You fuel the flames

If this track doesn’t get your head bobbing like a flame in the wind, then you’re truly doomed. The final track, “Crutches,” closes out the album on the ultimate noisy note. This track is harsh, determined, and embittered. The guitar riff sharply twists up and down, and the smashing of the drum tumbles out like a limp body falling down the stairs.

Even if the sun is shining on me and mine

The shadow of doubt will always confine

My deepest thoughts are my darkest secrets

My deepest fears will never be witnessed

EYES’ Underperformer is truly an interesting and enjoyable experience. The songs are tragically relatable for arguably every person dealing with the craziness of 2020. These tracks are great for getting the blood pumping, and they urge you to get up and flail around.

Recommendation: Underperformer is an album of many personalities. It’s humorous – “Now I can’t even be cast as an extra / Went from Sinatra to a modern Travolta.” It’s dark – “Broke all my bones / Crushed by life’s boxes / Even after they’ve healed / I’m still on crutches.” It’s depressing – “Nobody seems to care anymore.” That’s all you really need in an album.