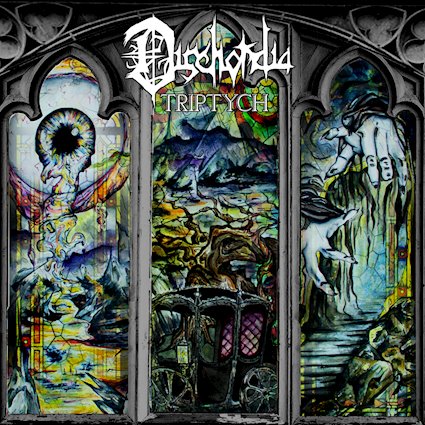 Le Petit Mort is a French expression which is used to refer to the moments at the end of and immediately after an orgasm. The stutter start and slow build down of this track, complete with a soaring chorus of vocals in the background seems like a fitting audio interpretation. Give this a listen for yourself – perhaps you’ll want a cigarette after – and then jump below the player for my full review.

Triptych may be the first death metal album that I’ve heard which credits one of the members with playing a filing cabinet. I’d love to see how that plays out on stage. Indeed, the trio employ a variety of weirdness to present gripping, trippy, bludgeoning darkness. Listening is akin to being dropped into the proverbial barrel of monkeys, having someone piss them off, and then nail the lid in place. In total darkness, you don’t know where the blows will come from, but you know they’re coming fast and furious.

Hailing from Oklahoma, Dischordia consists of: Josh Turner, who is credited with playing bass, flute, vocals, percussion, and wrenches (how do you play a wrench?); Keeno, who plays guitar, vocals, and slam ball (I don’t think I even know what that is); and Josh Fallin, who is responsible for drums, guitar, piano, and the aforementioned filing cabinet.

If you are tempted, upon listening, to wonder what in the world is going on, I’m right there with you. I suppose this could be broken down second by second, with specific definitions of what’s happening, but where’s the fun in that? Jump in. Enjoy the chaotic ride. Catch your breath. Repeat. That’s the best advice I can give in regards to wildly fantastic album.