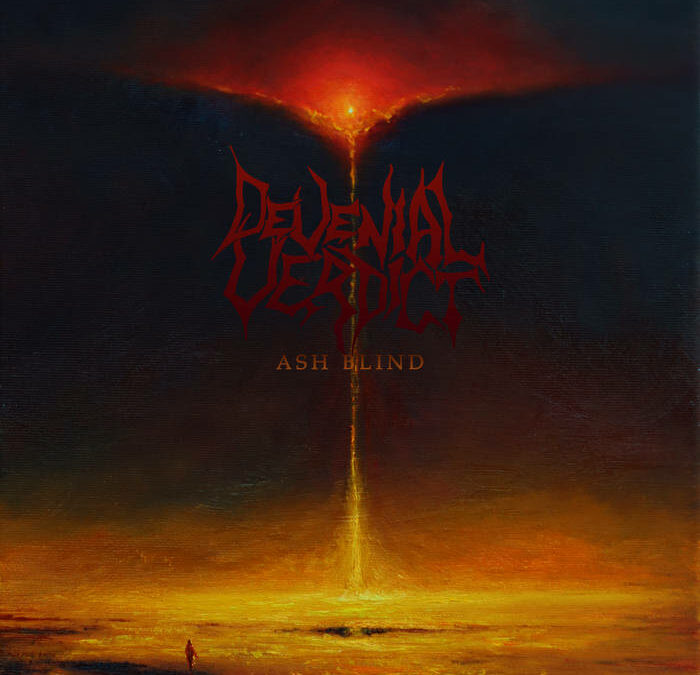 It is our honor to premiere the track The Contemptor from Ash Blind, the new album from Finnish death-dealers Devenial Verdict. The track is focused mayhem, like a maniacal surgeon hard at work…with a chainsaw. Incorporating nasty riffs and slow-burning atmospherics, the track is a post-apocalyptic soundscape, replete with feral attitude. Press play to listen for yourself, then jump below the player to read my full review.

Imagine yourself secured in stocks on the back of a slow-moving wagon. Two hideous oxen-like creatures, with scales and claws, open sores leaking fluids down their hide, pull the wagon through a grim, shadowy landscape. The air itself raises blisters on your skin. Breathing is a struggle. There is a sickly-sweet stench which seems permanently stuck in your nostrils. A crowd of misshapen creatures keep time with the wagon, moving en masse as an escort to your misery. Some cackle and heckle you while others through clumps of dirt, rocks, or worse things at you. A deep chanting sounds from some distance away, the direction indistinct. And yet, there is a strange beauty, even in the horror of everything surrounding you, your predicament, your suffering.

Ash Blind takes me to a headspace much like what I’ve described above. The album is caustic and vicious, horrifyingly bleak. It takes its time sorting through the horrors it presents with every riff, every hammering drum stroke, every rasping bellow. This is death metal from the abyss and it’s here to bring you back with it.

Much is made of dissonance in metal these days, and for good reason…it can really be mind bending when done well. Ash Blind presents a case study in what ‘done well’ means in this context. Sebastian Frigren calls forth, as if through some arcane mysticism, riffs which scorch the soul. Antti Poutanen joins into the string devastation through his bass, binding the dissonant wreckage to the unrelenting, though not especially fast, pace set by Okko Tolvanen behind the kit. Rounding out the nightmare quartet is Riku Saressalo on vocals.

Listening to these eight tracks requires a willingness to enter a harsh world, but the payoff is worth it. Ash Blind is a superior death metal album, holding my attention when little else does from that genre. The compositions flow like molten lava, seeping into your pores and cooking you from the inside out. Dive into this pool of punishment!