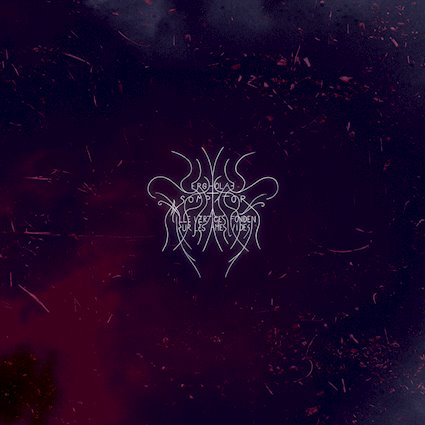 A year and a half after their debut full length Eau Ardente, the French black metal duo Ergholae Somptator are back with Mille vertiges fondent sur les âmes vides. Today, we are proud to present you with an early listen to the full album before its official release on Friday. Dig in, preorder, then jump below for my full review.

Formed in 2013, Jérônymous (drums, vocals) and Honoratus (guitars, vocals) play a white hot, ominous style of black metal that pendulum swings between raging straightforward drive and avant garde eccentricity. I have to admit that the challenging nature of the album was initially off-putting, but as with so many other records, taking the time to dig in led to the discovery of great things. I suppose if I was moved by ‘easy’, I would just listen to bubble gum pop.

Mille vertiges fondent sur les âmes vides starts of with the seething La mort bientôt jouit. The track gallops into action with nary a pause to breath, leaving scorching destruction in its wake. From there, the album mostly settles down..a bit…delving into more of a medium paced cacophony of destruction. Harsh earworms crawl through the sand of the listener’s psyche like shai-hulud in your brain, disturbing, disrupting, and defiling as they sizzle unnatural pathways.

Ultimately rewarding, Mille vertiges fondent sur les âmes vides is a grim, deranged ride. Riffs abound, but often in unexpected ways and patterns. The basswork rumbles relentlessly onward, sometimes surfacing to attack. The drumming is steady and varied, adding to the surprise of the overall attack with bursts of staccato abrasion. The feral vocals suit the album well, taunting and teasing their destruction in the songwriters’ native french. No sophomore slump for this band. Just obliteration from unexpected byways.