An Evening With Khemmis (Interview) 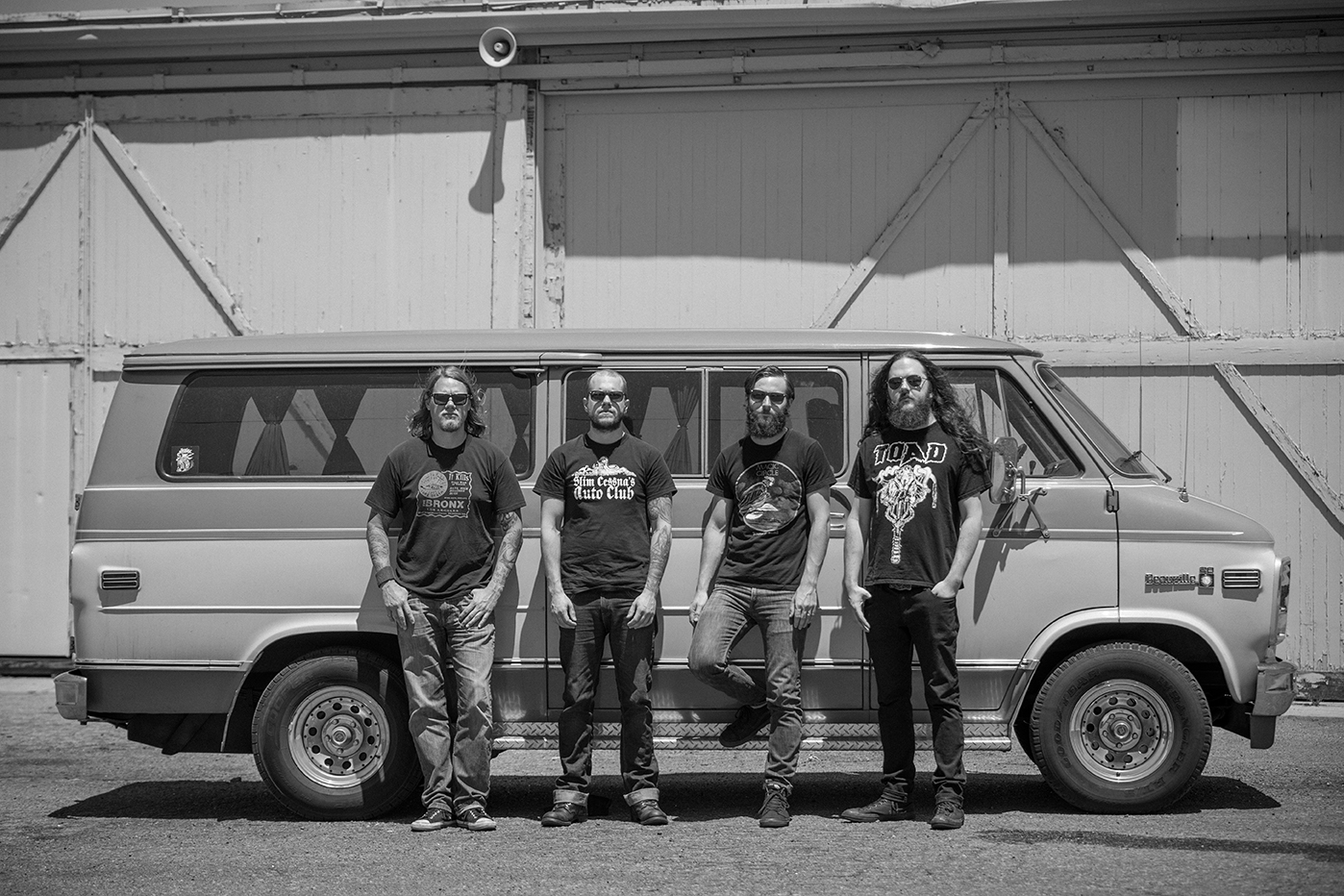 An Evening With Khemmis (Interview)

A while back, I personally got to sit down with a great band out of Denver, Colorado called Khemmis.  They were in Detroit at a venue that I had not been to before with a band known as Oathbreaker.  Hayduke and myself felt compelled to go to this venue and see them both live.  It was a great show to attend.  I loved every second of the ear splitting music from all the bands there, but I have to say that Khemmis was my favorite (not playing favorites because they gave me an interview or anything).  Their album “Hunted” was named Decibel’s #1 Album of the Year for 2016.  It was a tremendous honor to get to interview them and talk to them.  Here is the results of said interview:

Credible:  Good Morning, good afternoon, and good evening!  This is Credible for MoshpitNation’s Rage and Frustration.  I’m here with a great band known as Khemmis, and they are out of Denver, Colorado.  They have been out on the road here with Oathbreaker for a couple months now.

Khemmis: A couple of weeks now.

Credible:  I saw that you started in March?

Khemmis: Yeah, well the actual tour started the second week of March and we joined on in Phoenix.  We have been on the road with them for about two weeks.

Credible:  Alright, so what is it like being on the road with Oathbreaker?

Khemmis:  It’s great!  They are great and they are nice people.  They help us load our gear and vice versa.  And they have been playing great every night.  They put on a hell of a show.  They really do.  It’s pretty cool. It’s a pretty different audience than we play to. So it’s kinda cool to try and expand our reach a little.

Credible:  What is your typical audience?

Khemmis:  I would say traditionally, whatever that might mean, 30 year old men who drink beer.  We have a sizeable portion of our audience is women.  Which is surprising I think, because Zach and I have always played in much more extreme bands which tend to appeal to the heavy set dudes that only wear camo all of the time.  But it has been nice because their audience tends to be skewed a little younger than ours, so that is pretty cool to see younger heads getting into what we do.

Credible:  So you guys have been playing live for how long now?

Credible:  You guys currently have two albums out, Absolution and Hunted.  One came out in 2015 and the other in 2016.  Of the two albums, in your live sets, which song do you think is your favorite to play?

Khemmis:  We like to play Hunted and the Bereaved.  I say Hunted and Three Gates goes over very well, because it is basically a speed metal song for us.  It is actually medium paced but fast for us.  I like playing Candlelight which is in our current set now.  And we play The Bereaved in every show we play.  And lately we have been playing it at the end of the set.

Credible:  Let’s talk a little more about your albums.  I listened to Absolution, which I found was a great starting album and one to really break onto the scene.  But I really want to talk about Hunted.  It was number one on Decibel’s charts for 2016.  How does that feel?

Khemmis:  Incredible. Awesome. We are still not really over it to be honest. When you get that question asked you get to thinking about it and relive that feeling.

Credible:  Along with it being number one, did you expect that when you were coming up with the album and playing it?

Khemmis:  No. Not at all.  We all thought we wrote an album that was better than Absolution and Decibel really liked Absolution.  We were all like ‘we hope they really like this one because we all think it’s better.’  But we didn’t know it would translate into being their number one pick for the year.  It’s still really humbling to even think about honestly.  And you know you can never really predict just how people’s taste will evolve over the course of the year.  And how general trends in music will evolve every year so even though we felt good about it, everyone else could be like ‘Oh no, we are only into acoustic music now.’  Nor can you predict how many other really great albums are going to come out that year.  Like it already looks like 2017 is already going to be a pretty amazing year.  Thank god we don’t have an album coming out this year.

Credible:  Well that actually leads into my next question.  You had an album for 2015, and another for 2016.  Was there an album for 2017 kind of planned or are you going to take a year off to tour and write?

Khemmis:  There were lots of things that went into how quickly we got those first two albums out.  And part of it was that we recorded Absolution in the Fall of 2014, then we were shopping it around and trying to get someone to put it out.  So we already started writing Hunted before we got a deal with 20 Buck Spin.  So it just happened that by the time Absolution was out, we were like ‘well we already got two thirds of an album written.’  The other thing is too, that at that point were weren’t touring much at all.  We were doing a week out of every year and now it is getting to the point where we are getting offers worth entertaining that keeps us out, like this one, a bit longer. I think that you will probably likely see an album next year from us.  We have a whole lot of ideas kicking around already and we have a sorta direction for that.  But it won’t get to really sit down and write anything together until summer because we have some other stuff going on.  I don’t think it is fair to not expect something for 2018.

Credible:  A little bit more about Hunted, as I was listening to the album, I hear a lot of Iron Maiden influence in there and I hear some power metal

Khemmis:  Nope.  No way, you are mistaken (everyone laughs at this point because of Sarcasm….).

Credible:  I am not mistaken I think (more laughing).  What kind of inspired you to write the songs on the album Hunted?

Credible:  I heard their influence in your music but let’s get a little deeper.  What motivates you to write these songs?

Khemmis:  I think, honestly, that a lot of us just have to write them.  I don’t know, like part of it is honestly boredom.  I mean, we are a band so bands make music.  We can only play our songs so many times and then it is like, hey we like playing and writing is just part of playing.  And the pain of existence.  You have to have some catharsis for shit that is going on.  And both albums have been pretty inspired by trying to deal with stuff.  I don’t want to go into too much detail about that but like they are inspired by different things and they mean something to us.

Credible:  Most of the doom metal that is coming out right now tends to be low musically speaking, but you throw more high notes into your music.  Is this from how you are inspired by Iron Maiden?

Khemmis:  Yeah it is to some degree.  But it is also being able to have one foot in rock and roll and so that is where some of it comes from.  We are also trying to write dynamic songs that often requires you to be slow then fast, or low then high, or have a groove going in one section that is totally different from another section, or whatever that really means.  We try to write things that take you on a journey someplace.  And we try to write things that we want to hear too.  We all like hearing pull off open string harmony kind of things.  So it is less than we are walking around thinking ‘Oh we should definitely have this sound like Iron Maiden.’  It is just like naturally what we produce.  It’s all pretty natural for us, we don’t try to force anything.  The writing process is like ‘I hear this here,’ not like ‘Oh no, we are writing a doom song we can’t play that.’  I think that is the thing, we just don’t put limits on it.  We think of ourselves as a heavy metal band or a hard rock band maybe.  So there are many different ways you can go with it.

Credible:  And I do appreciate everything you do with your music.  What made you settle on the title of Hunted?

Khemmis:  I mean it kind of is an allusion to all of the lyrical themes.  I think that there is a story there for you if you pick apart the lyrics

Credible:  I have not gotten to read the lyrics and I had to decypher them and it is pretty easy because of your clean vocals.

Khemmis:  Yeah, I try to enunciate pretty clearly too.

Credible:  And you do really well.

Khemmis:  Thank you.  If you go to our bandcamp we have them up.  Our label doesn’t, but we have the lyrics up.  Because people would ask about them and we go tired of copying and pasting them into emails so we put them there.

Credible:  I think that everything melds together really well into almost a predator and prey relationship which is heard in the music.  And it makes a really great sound as a doom band and a great combination of doom and rock.

Khemmis:  Thank you.  That is pretty much what we are going for I guess.

Credible:  I want to thank you guys for your time and thank you for everything.  I can’t wait to hear you live.

From the interview, you can tell that this band likes to play.  I am holding onto the fact that there will be another album in 2018 for me to review.  When that day comes, I will be waiting and hoping for something to melt my face.

As for the album Hunted.  If you do not have this already you need to pick it up.  It is a great album and I can see why it was rated Decibel’s #1 album for 2016.

I would like to give a huge shout out to the guys in Khemmis:  Dan, Zach, Phil, and Ben.  Thank you for letting me interview you and hopefully see you again soon.