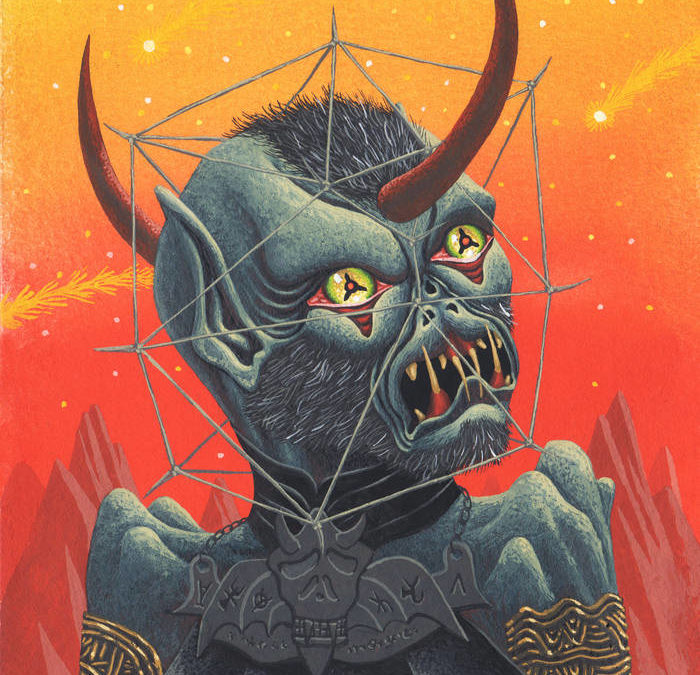 With a mix of brutality, dark atmosphere, confusing, yet proficient musicianship and an absolute pitch black overtone, France’s Escotrilihum have once again created a work of pure and terrifying art.

Asthâghul, the mastermind behind Esoctrillihum, has unveiled his newest work, by the name of Eternity of Shaog. Out on I, Voidhanger Records, a label which has excelled at finding and signing some of the best black metal releases as of late and here, they have put out another absolute winner. This album takes all of Asthâghul’s previous ideas and successes and shapes them into a whirlwind of black/death metal, with a suffocating atmosphere and enough cantankerous, dissonance to keep fans of Blut Aus Nord, Deathspell Omega, and even Suffering Hour, pleased as pie and salivating for more… And with this being the fifth full length album, in just under three years, more than likely, we will be treated to more of these unconventional and oddly frightening works of art.

Eternity of Shaog sees a slight shift from the past albums, mainly because this album is actually a lot more…structured, for lack of a better word. Songs sound more cohesive, the album flows very well from track to track and I feel like this album can be enjoyed a lot more, from song to song. Previous albums from Esoctrilihum were chaotic, eclectic and sometimes felt like a raging wall of noise, constantly barreling over your senses. This piece of work feels like all of the movements within each song, and indeed the songs themselves, flow from one another and into each other so well, that it feels much more complete. I also feel like this is the first Esoctrilihum album to feel like I can listen to each song individually and feel a sense of satisfaction. I don’t feel as though you have to listen to the entire album, back to back, to enjoy it. It seems as though the previous four works were meant to be enjoyed as complete works… Albums to listen to from start to finish. Not so with this album, for better or for worse.

All of the ingredients poured into this album are the same elements found in the previous four works, yet it almost seems unfamiliar. The production is better…cleaner. All instruments and individual components sound louder and the mix between them is much improved. The inclusion of violin within this band is so much more apparent and frequent, than before. The use of stringed instruments, sometimes acoustic, alongside eerie keyboards, add an element of dissonance and atmosphere, that is unmatched by any band I know of, of a similar style or genre.

As usual the main focus, as with most black/death metal, are the driving, catchy guitar riffs and omnipresent pounding drums. Guitar and bass riffs are a little more melodic this time around and add an element of familiarity, of something you definitely haven’t heard before, yet it just feels as though these riffs were always floating in the cosmos, just waiting for the right seer/artist to pluck them from the void, to use in their art. Sometimes chunky and crushing, sometimes meandering and ethereal, every guitar and bass line feel as though they belong RIGHT THERE. Speaking of the guitar, there is a stringed, acoustic instrument used frequently on this album that I can only describe as sounding like a sitar. I’m not entirely sure if this is just acoustic guitar, with effects, or if this is keyboard work? It sounds organic, but in this day and age and with the technology available, I could be completely wrong. Either way, however, this sitar-sounding instrument add a ton of variety and ambiance, to this already stunning piece of work.

When I first heard Esoctrilihum and was looking up information regarding the “band”, I was not entirely sure if the drums were real, or programmed. Every album on the Metal Archives, lists Asthâghul as the sole member and responsible for “all instruments, vocals”. This time around, it lists him as responsible for “Guitars, Bass, Drums, Violin, Synthesizers, Piano, Vocals”… I’m starting to think that the drumming is indeed from a real drum kit. However, there is still definitely some programming added, as well. The pounding, heavy, war-like toms are artificial, I believe, alongside some interesting sound effects and background ambiance. It all adds up to a dense and thick overtone and delivers a riveting experience.

Vocally, this work falls in line with the previous works, as Asthâghul’s many voices, screams, yells and venomous ranting and raving, has not changed much, but has only improved and become more up front. His mid-tone screams sound like the uttering of an absolute madman, trapped in an endless cavernous maze, shouting for release. These vocals in particular, are some of my favorites in the genre. Absolutely mind bending and hypnotic, in their rhythmic hate-filled brilliance.

While this album sounds better, is more cohesive and even catchier than the preceding four albums, I feel as though this album is the TINIEST step back from the last work of art from Esoctrilihum. “The Telluric Ashes of the Ö Vrth Immemorial Gods” was an incredible piece of art, that while not as cohesive as this new album, was a musical work, which absolutely floored me. I almost could have predicted what this album would sound like, based on the progression of the other albums, and while I absolutely am enamored by it, I love the chaos, wall of noise and crazy structuring of the last album the most. I was honestly surprised by the catchiness and the memorability of this new album and while that is definitely not a bad thing, something small is missing. Perhaps chaos. I would still give this album a 92%, as opposed to the 95% I would give to the last work. Still awesome and powerful. Standout tracks are definitely Thritônh (2nd Passage: The Colour of Death), Amenthlys (5th Passage: Through the Yth-Whtu Seal), and Shayr-Thàs (6th Passage: Walk the Oracular Way), the last of which sounds like a twisted version of a Lord of the Rings song, from a different planet. Breathtaking and one of the best Esoctrilihum songs I’ve ever heard.

Eternity of Shaog was a tough album to review and digest. On one hand, it is a crazy, epic journey through madness and pandemonium, that never gets old, but on the other hand, it is just SLIGHTLY inferior to the last work from Asthâghul, which isn’t saying much negative, since his compositions are quickly becoming some of my favorites in the genre, no matter which album we are talking about. I have the feeling Esoctrilihum will be (and probably already is) working on a new album and it will no doubt, blow most of us all away, whether it is his top album, or not. Eternity of Shoag is a journey, as with the previous albums and is a great place to start, for those new to this intricate brand of turmoil and havok. Essential as all hell.