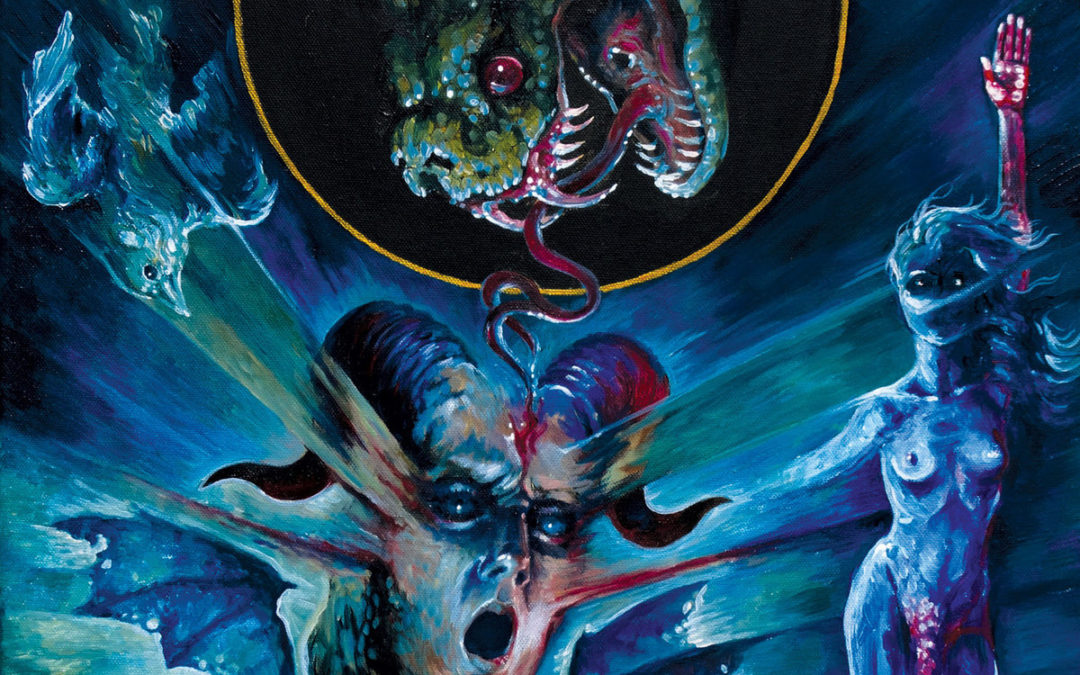 Shrouded in a dark and unfamiliar air, the newest Esoctrilihum manages to stay on track while advancing the audio chaos that we are all familiar with at this point. Dy’th Requiem for the Serpent Telepath, for the most part, advances the musicianship and compositional elements from last year’s excellent offering, Eternity of Shaog. However, there are moments on this album that feel like throwbacks to earlier works, such as the Inhüma and Pandaemorthium albums.

There appear to be three different types of tracks going on here… Many songs, such as the first three, tend to have a synth-heavy, bombastic sound that can almost be compared to Summoning, or other bands of a similar sound.

These are in contrast to, but not completely dissimilar from, tracks such as “Baahl Duthr,” “Dy’th,” and “Nominès Haàr.” These songs tend to be heavier, more aggressive, and have a more oppressive atmosphere.

The third type of song incorporates both, and are sometimes jarring, but not in a bad way… Ethereal cosmic landscapes filled with subdued guitars, deeply heavy synths, and violins… and one minute later, you are met with a harsh tremolo-picked landscape with outrageously fast drumming and a seriously violent aura.

“Eginbaal” is a great example of a song with an epic duality. Powerful synths, machine gun drum blasts, heavy guitar riffing, and Asthâghul’s signature venomous rantings start this track out… But, it soon evolves into another beast altogether. Like shifting from one dimension to another, the sound becomes more epic, atmospheric and starts to add a bit of drone to the mix. Truly a great combination of many of the ideas presented here, and a great song for those new to Esoctrilihum.

I’d be remiss to not mention the instrumental track and “Hjh’at,” the outro song. They do their job decently enough, especially the outro, which sounds like a logical conclusion to this masterpiece. That being said, “Craânag,” the instrumental track, seems a bit out of place with zero semblance of metal, besides mood. No guitars, vocals or drums after seven songs of metallic brilliance really threw me off, and it’s not the first time Asthâghul has surprised me with one of these tracks. Great on it’s own? Absolutely. Thrown in two-thirds of the way into this tornado of black abysmal chaos? Meh. It would have made a better intro, if anything.

Besides a small complaint with the instrumental track, this album has managed to progress Esoctrilihum’s sound even further than previous albums have pushed it, and this is very much welcome. The violins, small piano sections, and layered synths give Dy’th Requiem for the Serpent Telepath a very unique aura and tone. As usual, the drums are pure insanity, going from all out blasting attacks, to doom-heavy pounding at the drop of a dime. The guitar riffs! Always one of my favorite parts of Esoctrilihum, and though in the background a bit more this time, still drive the songs with absolute riff mastery. Lastly, Asthâghul’s vocals have reached further levels of epicness… Rasps, screams, distorted yells, and even occasional chanted clean vocals are all on display here and add a cosmically horrific ambience to the album. Truly one of my favorite vocalists in black metal as he becomes more proficient at his art.

Esoctrilihum have delivered what very well may be my new favorite release. Every album seems different despite being released so close together, chronologically. Dy’th Requiem for the Serpent Telepath has reached a new level, however. I am completely floored by how many times I’ve listened to this beast, and yet, I’m constantly hearing new elements and nuances. It does NOT get old. This would be a great place to start for the new listener as well as for established fans of Asthâghul’s works. I would highly recommend starting with the tracks “Agakuh,” “Dy’th,” and most notably, “Salhn.” Those with open minds and chaos in their hearts will rejoice.