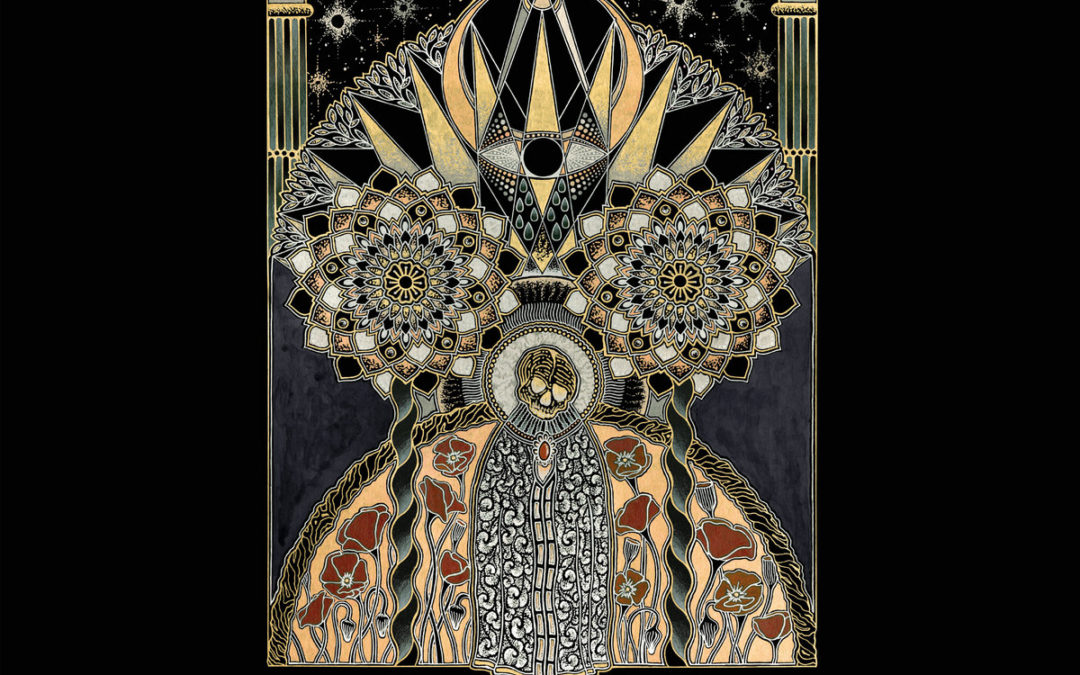 Psychedelic black metal is one of my favorite subgenres within black metal. Ask anyone who knows me, I am obsessed with Oranssi Pazuzu and Waste of Space Orchestra. Their music is timeless, and it strikes a chord within me that’ll never be silenced. A forever screaming siren if you will.

ANYWAYS, back to the review.

Det Eviga Leedent brings us their sophomore album, ‘Reverence’ with Jacob Buczarski (Mare Cognitum and Acathexis) on vocals, and man! Did they deliver on this one!

You might be wondering why I brought up another band to start this review.

Every year there’s an album or two that defies all logic and continues to stay in my top 10 all year despite being released in the first month when everyone is still hungover from the year before, and it stays there without a budge or concern on its position. ‘Reverence’ from Det Eviga Leendet is almost guaranteed to be that album.

While flying in and out of consciousness, we are met with chilling riffs that stay trve to their black origins. An almost cosmic vibe can be found harmonizing with the black psychedelia that oozes from the core of the music. Now, cosmic and psychedelia go hand in hand, but the way this particular album binds them together makes this release special.

I’d like to take a moment to point out the artwork! One thing that sticks out is its over-the-top abstract delivery. It almost looks like a mechanical elf! (If you know, you know) The first thing that came to mind when seeing the album art was one of my all-time favorite artists, Louis Wain. Long story short, he was an English artist who painted cats. When his mom died he developed schizophrenia, and his cat paintings started to become more and more abstract as time went along.

All of the elements when taken out and studied individually wouldn’t show too much of an avant-garde-like structure, but once you match up the components and let it breathe as one, that’s when the magic is conjured into its existence. The sheer mass of this black asteroid can be felt for miles. Allow yourself to be crumbled by its gravity…

Musically and vocally, this is one of the stronger, modern black metal releases that we have had in quite some time. I say “modern” because this is something that carries more of a black metal attitude and sound of the newer generation. This isn’t your 90s, corpse paint, basement, black metal. This is your interstellar blackened express! Enjoy your time traveling through space and dreams as Det Eviga Leendet brings you to the next plane of consciousness!

‘Reverence’ was released on January 28th, 2022 through Mystískaos and Extraconscious Records and can be bought digitally or on LP. CD format was brought to the world thanks to Amor Fati Productions. Make sure to pick this album before it sells out. This will be one of those albums that takes off and stars are the limit! Don’t get left behind! This is your warning!