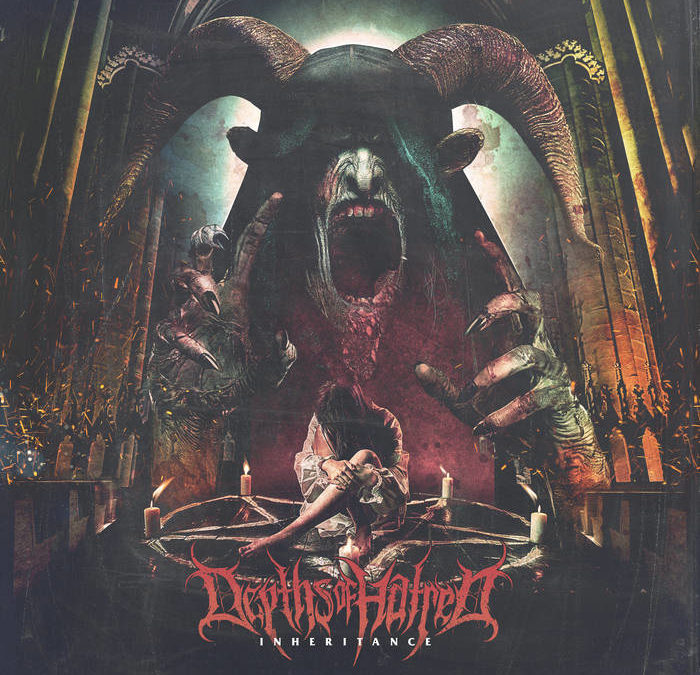 The subgenre we all know as deathcore has undergone a multitude of different movements. As does most any style of metal, deathcore has taken in many different influences since its inception in order to grow from its trunk into many different branches. Some branches are more prevalent than others, but any respectable deathcore fan knows that there are bands still carrying the torch for all of the older movements – including Montreal group Depths of Hatred.

Depths has, for the better part of their career, donned a more melodic death metal-heavy approach to their brand of early to mid-2000s deathcore, similar to Through the Eyes of the Dead and As Blood Runs Black with certain tendencies of The Black Dahlia Murder. Now, we see the band tread into new territory with their newest offering, “Inheritance”. This album, we see Depths dip swiftly into a more metalcore approach alongside their core-infused death metal. While I was fairly familiar with the band’s material prior to Inheritance, I have to admit that I noticed the difference in sound almost immediately upon pressing play. I’m sure this was the band’s intention, so kudos to them for achieving the sonic separation from their past. Intro track “Enslaved Through Inheritance” immediately kicks in with a crawling rhythm section that breaks into a passage I didn’t quite expect. Whereas the old Depths would have transitioned into a furious whirlwind of blasting, they instead head for a more reserved breakdown, bouncing underneath a melodic lead passage. This keeps up for a while until we are then treated to a bit of the classic melodeath we’ve come to expect from the band, along with the first taste of new vocalist William Arseneau. The song weaves back and forth in between the melodeath riffing and the syncopated metalcore passages until it quickly ends (somewhat prematurely, if I’m being honest).

With the introduction complete, I find myself curious as to what the band will do throughout the rest of the record. Having already experienced so much change in one song, I just want to know where Depths heads from here. As the next track “Sadistic Trials” creeps in through the stereo, the band wastes no time in busting out another quick melodeath riff and then proceeds to immediately break into another metalcore passage – this time solidifying the band’s newfound utilization of singing. The song provides a very clear singing chorus that relates to band’s like Killswitch Engage and All That Remains, with an instrumental song colored in a  more modern metalcore style. “Sadistic Trials” continues to bounce back and forth between the intense melodeath and the aforementioned chorus before it once again quickly ends.

Okay, now I’m seeing a pattern here…which for me, I’m generally not excited about being able to predict where the songs are moving to by only the second track, but I’m pressing on nonetheless. Pulsating Rhythm blows in with a surprising black metal-influenced string walk (Not so much a surprising choice of notes as it was surprising to hear that style at all), and then continues rolling along with a blackened tremolo-picked melody that caught my ear heavier than anything up until this point. I was pleased with the way this song was building up, but I had a feeling it was still going to lead into another “big chorus”, which sure enough, it does. Even more notable is the fact that while the vocal phrasing is different, the choice of pitch is almost identical to the previous track. All that aside, Pulsating Rhythm does do a good job at bringing out some new tricks in the remainder of the song, making it one of my notable picks from Inheritance.

In an attempt to avoid beating around the bush, I’ll state this much – as an avid listener of metal, I strive to be surprised with the material that I hear. I like not being able to predict what happens next in a song. This album…I had a fairly easy time being able to tell what was coming next. Even with the melodeath passages that I’m more interested in, I felt they were all too easy to anticipate in the grand scheme of the song. I feel Depths of Hatred found a structure formula and ran with it. Although I did find myself pleasantly surprised with certain moments in Shivers as well as the title track, the album as a whole didn’t necessarily contain enough twists and turns for me to fully immerse myself in it.

The positive is that this album is wonderfully produced, with a very talented group of musicians performing the material. They clearly know what they want to do with their music, and it’s certainly not their fault whatsoever that it didn’t necessarily connect with me. I think this album could certainly go over well with the more new-wave metalcore crowd as opposed to the death metal base that they once inhabited. For fans of the metalcore genre, try this out. It may be your next thing. However, I believe that most fans looking for the death metal edge in their music may be slightly jarred by the change of pace that Depths of Hatred has undergone.