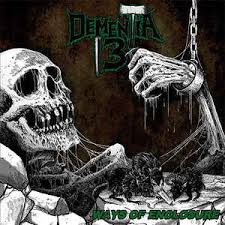 Dementia 13 is a contemporary Portuguese Death metal band that nevertheless takes it very seriously about recreating the whole vibe, feel and concept of OSDM, namely the early 90’s aesthetic.

Dementia 13 works as a side project for two of the members of thrash band Pitch Black, Marco Silva and Alvaro Fernandes (both on guitars) and bassist Zé Pedro, of Grunt and Holocausto Canibal fame (the two best portuguese grindcore bands). Add in a session drummer for the recordings and for live shows. Now the curious thing is that, coming from different styles and having assembled this formation as a side project, it turned out quite good and focused, mimicking the early DM style to perfection.

Their 2011 presentation EP featuring four tracks, showed the world their take on the most pure old school death metal that is being made these days.

Then in 2015, this three-piece band hailing from Oporto returned  with their first full length, the relentless “Ways of Enclosure”.

So if you think early death metal, and I mean, really really early, like Obituary, Cancer, Massacre, Suffocation, Immolation and then their european counterparts such as Morgoth, Grave, Entombed and Gorefest…all in their early stages, you get to start to imagine how this collective sounds…

Now you can argue about this choice of sounding so similar to some of the bands that were aforementioned, but when that task is done in such a perfect way and resulting in such a tight and focused album, then you should at the very least indulge them and surrender to their ability of recreating to perfection such a signature sound.

“Ways of Enclosure” not only pay tribute to that era of death metal, but is also inspired by vintage horror movies. Each individual track mentions one particular movie, with samples and with the lyrical content being about the chosen movie. This comes as no surprise, as the band itself is named after a 1963 Francis Ford Copolla horror-thriller movie.

What this band offers is simply a feast of riff after riff of tasty death metal, old school style. And one must remember the fact that the band is not trying to be innovative, is just paying tribute to the best bands of a very particular and brilliant era on metal…

Summing it all in a few words: this band has set itself to allow any listener to recall or experience how it felt to discover death metal in its early stages. And they succeed in this task, as the music they offer is pure, untampered, no additives or preservatives type of death metal. Violent and horror themed, crushing and riveting old school death metal…and it feels gooooood!

Simply one of the best Portuguese bands around, period.