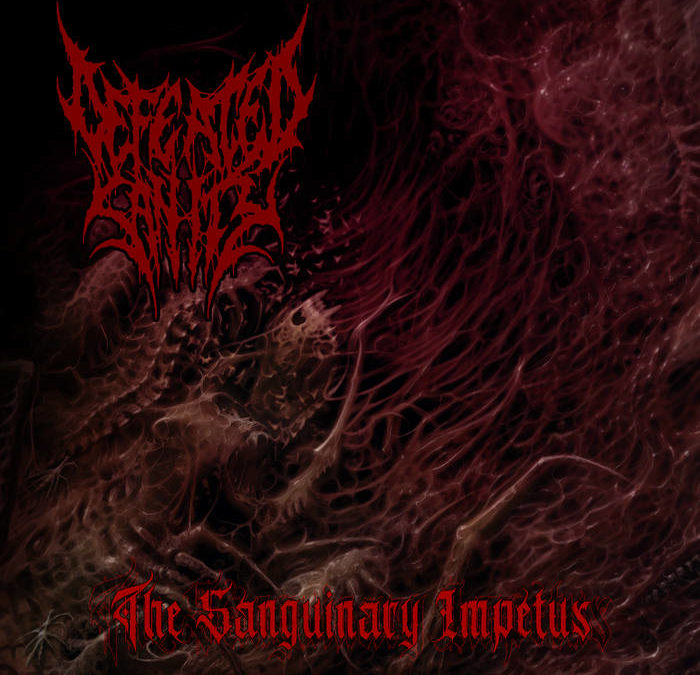 We start with a pop. A drum hit that bounces and repeats, as though a ball were dropped, then… chaos. The guitar resonates and wastes no time spilling note after note in quick succession as the drums relentless pounding begins, the audible bass thrums and the otherworldly growls gurgle atop it all. This onslaught rarely lets up over the next thirty plus minutes either.

I was not familiar with Defeated Sanity prior to this release, but I had heard the name make its rounds in the metal community and knew they had their share of fans. I can safely say I would count myself among them now. Hailing from Germany since 1994, their evolving lineup has put out five previous studio albums, The Sanguinary Impetus being their sixth. Opting to follow in the footsteps of the ’90s American Death Metal scene of acts such as Cannibal Corpse and Suffocation, they play a fast, brutal form of Death Metal that maintains a distinct technical aspect with quick succession of riffs and blasts.

Albums such as these are organized mayhem. Drums that push the songs ever forward with a steady force and give plenty of fills for the thrills to keep it interesting. The guitars shift between chugging riffs and noodling licks. Guttural vocals bark their way along. Perhaps one of my favorite aspects of this album was the clear bass. I had no trouble following the deep hum of the bass, as it weaves its rhythms alongside the drums. Besides the technical proficiency, Defeated Sanity also brings the breakdowns that slow the pace ever so slightly and bring in the grooves and brees for those headbanging moments.

Does it break the mold and provide a fresh take on the genre? Hardly. However, those who enjoy this style will find that repeated listens are rewarded with new tidbits that unearth themselves among the tumultuous sounds; a passage here, a drum beat or bass rhythm there. They do it well, and I would recommend this album for anyone who is a fan of highly technical metal that still keeps an overtly heavy and vicious sound such as Suffocation or Wormed.

Biography:  Lakrym is a fan of many types of music from the weird to the predictable.