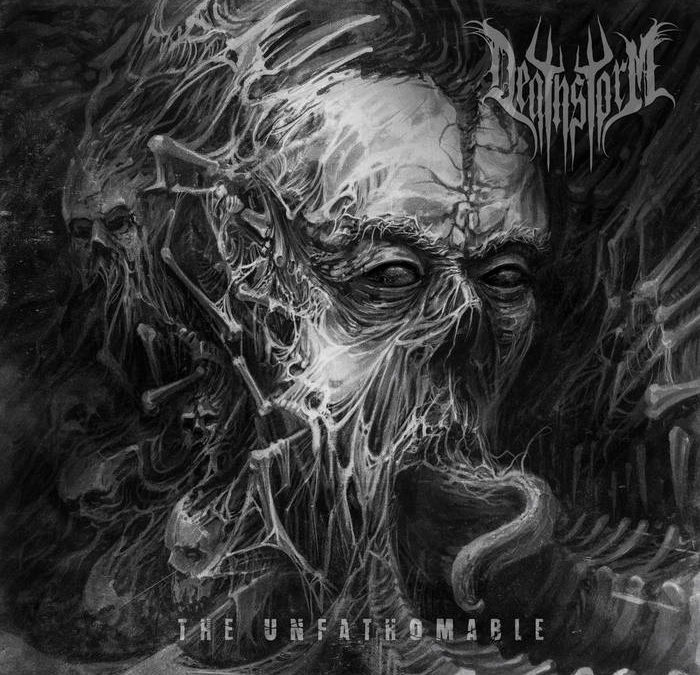 Deathstorm released The Unfathomable of CD back in 2018 and has yet to release anything else since then. Prior to this release, they had released a full length Nechesh (2013) and the demo Storm of Death (2010). Fortunately for us, the album came into the hands of the incredible Analög Ragnarök for a cassette release. If you haven’t checked out this cassette-only label yet, you should fix that as soon as possible. The cassettes done by the label are incredible in appearance, and the albums he chooses to are incredible in sound, almost all right up my alley. For this release, the cassette will feature a full body print of the cover art and it looks sick! You better believe I have mine pre-ordered.

On to the music. The Unfathomable just shy of forty-five minutes of some near perfect music, dark and heavy, entrancing and mystifying. The band is labeled as a death metal band, according to Metal Archives, and that label fits well enough as a foundation of what they do, but they are so much more than that. The atmosphere of the album contains a ton of doom, to the point where I’m actually more comfortable using death doom as the genre designation. In addition, amidst the deep and roiling sea of riffs, there nasty waves that crest and break as true black metal riffing, cold and incisive. The effect that these influences have is hard to quantify.

The Unfathomable is clearly an exploration of death. The music channels you deep down pathways that perhaps you shouldn’t travel. The journey is through both the most massive of spaces (think, the depths of space) and the most miniscule (think, the space between atoms). As with all things that are past our finite understanding, the path we travel, with Deathstorm as our guide, are contradictory. They cannot exist, and yet, we travel these paths unlocked in The Unfathomable.

Kuba is our trailbreaker. His drumming patterns, rhythmic, sometimes almost tribal, varying in speed from doomy to blasting, break down walls to the left, even as we turn to the right. Mysth turns aside creatures of all sorts with filthy bass work, all while exhorting and calling us along on this journey with his varied vocal work, both in style and pacing. Generally speaking, his vocals are deep, but clear growl, but they are not monotone, with many differences in intonation and rhythmic patterns to his work. Góral and Jędrek are the magicians who weave the spellwork that opens the pathway and shutters the false trails through their stellar riffwork.

I cannot say enough positive about this album. It is very nearly perfect, a triumphant masterpiece, drawing the listener forward in a measured way, all while also channeling the utter chaos of the void. Though there is nothing new under the sun, Deathstorm have caught dark lightning in a bottle here, with their mastery of a style too often found to be repetitive and boring. The Unfathomable is a true masterwork.