Dearth – To Crown All Befoulment 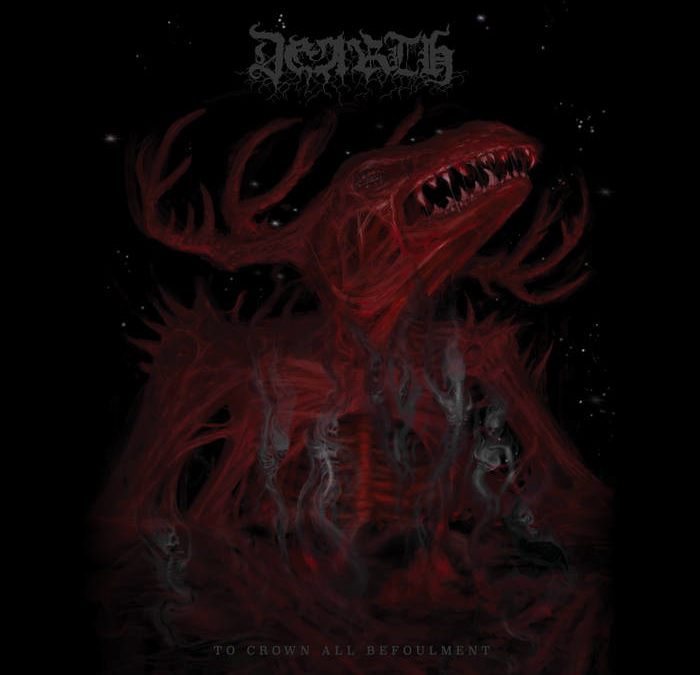 Album – To Crown All Befoulment

Complete Human Obliteration: A Review of DEARTH’s To Crown All Befoulment

From the rotting, stinking streets of Oakland, California arises the abhorrent entity known as DEARTH. Fueled by an acute misanthropic rage and revulsion for human filth (which the Bay Area uniquely provides), To Crown All Befoulment strives to take the throne for unremitting nihilism and sonic annihilation of 2020 with it’s infernal, terror-inducing, and lethal combination of black metal, death metal, and bestial/war metal.

Upon listening to To Crown All Befoulment, it becomes apparent that there isn’t really a weak element to the composition and execution of this violent, consuming monster. Ferocious vocals vacillate between spiteful black metal screams and terrifying cavernous roaring. Rhythm guitars churn out catchy, yet devastatingly oppressive riffs, while the tremolo lead rips through the surface, grasping for the listener’s throat (particularly good in first single ‘Death Sown in Polluted Soil’). Pummeling and gloriously heavy bass guitar provides a solid foundation for all of this destruction, as hammering percussion relentlessly drives the songs forward.

Yet, although some tracks consist almost entirely of unrestrained aggression (‘Writhing in Cellophane Cage’, ‘Blight’), this momentum does not always consist of full-scale maelstrom, and the album is peppered with other malicious tendencies as well. At times the timbre slows down into hateful, smoldering, almost doomish pacing (try the second half of ‘Autoasphyxia’ and parts of ‘The Reverence of Swine’). Additionally, albeit without a trace of beauty, To Crown All Befoulment is not void of atmosphere, with some areas writhing in a nauseating, almost hallucinatory whirlwind atop a substructure of consistent doublekick (‘Autoasphyxia’, ‘Anthropocene Through Burial Mounds’).

‘Death Sown in Polluted Soil’ is currently available to behold, and the entire tome of complete human obliteration is currently up for preorder through Sentient Ruin, to be manifested in digital, tape, CD, and LP forms. It will be fully released upon the hapless world on June 19, 2020. Do not miss it!