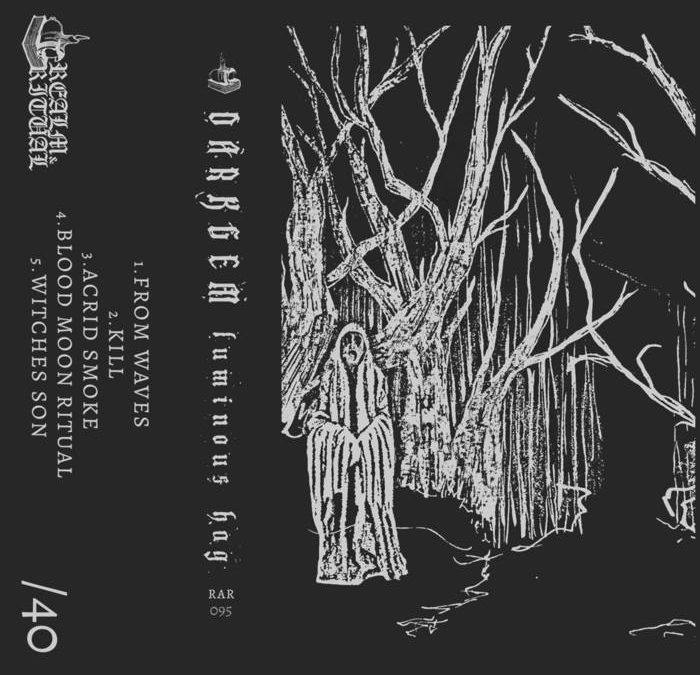 Darkgem is the solo project of Ian Henry, who is also a quarter of the now dormant, but quite exceptional, Crystalarium (on hold since Henry’s cross country move). Picking up the anticapitalist mantle of the Boston USBM project, Darkgem moves forward thematically, but forges a new path sonically. Of the lyrical themes, Henry states:

The lyrics and emotions of the record are inspired by conflicting feelings of rage against capitalism’s destructive power, a renewed sense of urgency to fight it, and an ever-present desire to escape into self induced delirium. The name ‘Luminous Hag’ represents an unhinged and otherworldly entity that I allowed myself to become throughout the process.

Musically, Luminous Hag builds from a black and roll base, versus the progressive USBM of  Crystalarium. It is, however, black and roll with a lot of other elements woven in. For example, the first track (essentially an instrumental intro) features, flutes of some sort, among other near folk metal influences. These additions to the sound are most certainly on purpose. Henry explains:

As for Darkgem in general the intent of the project is to explore a plethora of fucked up and beautiful sonic possibilities that black metal and related genres have to offer while remaining unified through easily digestible song structures, and (most likely) vocal centric productions.

The real question, of course, is does it work? The answer is a resounding yes. After the initial intro track, Luminous Hag is a fist pumping romp of passion and power. The riffs are earworms that, though relatively simple (I think…to my untrained ear anyway), have a beauty and staying power. There is vibrant energy and a sense of immediacy to these tracks, probably due to the purpose of the composition. Again, some words from Henry:

Luminous Hag was written in the fall of 2020 and recorded in the lonely winter months of 2021. I poured the my experiences of the turbulence, relative isolation, and deep seated existential fear from the last year into every aspect of this record. The sound of the record is inspired as much by raw energy of 90s black metal as it is by bands recreating that sound today. I wanted the songs to be simple and direct so that the “feeling” would reign supreme over the technical qualities.

As the EP progresses, the tracks each build through their various ways to the final track Witches Son, which is probably my favorite on the release. (Acrid Smoke gives it a real run for that designation). This finale is a sing along banger that will get your head banging. While I’m hopeful that Crystalarium will once again see the light of day, Luminous Hag has me convinced that we also need more Darkgem.

Here’s the full stream courtesy of the Order ov the Black Arts YouTube channel. Go over to the Realm and Ritual Bandcamp page (here) tomorrow to grab one of the limited copies.