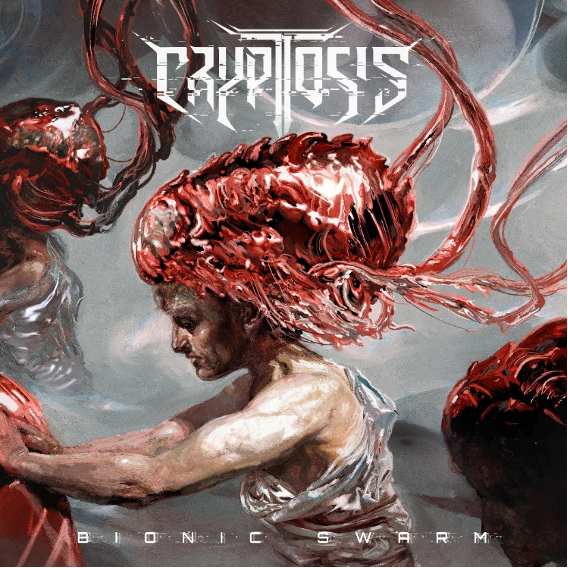 Bionic Swarm is the perfect name for this album for a couple of reasons. First, the riffs attack like a swarm of wasps. They are tough, driving, and have staying power. Second, the word bionic suggests something human-like, but with an element of beyond human capability. Anybody else old enough to remember the Bionic Man? That’s also very fitting for what the band is doing here. The album is warm and has feeling – soul, if you will – yet, how to they do some of what they’re doing? Drumming, lead-work, riffs, bass lines, vocal pitch…there are moments in each of those areas where I wonder if the Bionic Man has stepped in to lend a little superhuman edge.

From what I gather, Cryptosis is a new project, having formed in 2020, but was born from Distillator who had been around since 2013. The trio from The Netherlands consists of Laurens Houvast (vocals/guitar), Frank te Riet (bass/mellotron/backing vocals), and Marco Prij (drums). Yes, that does say mellotron. The band reminds me of Voivod in multiple ways. Cryptosis is definitely progressive thrash, with lots of changing rhythms, progressive melodies, and various moving parts that guide the listener on a strange and engaging journey, yet staying (mostly) within the confines of thrash. By the way, when I compare a band favorably to Voivod, one of the untouchable demigods of metal, it’s meant as a really, really big compliment.