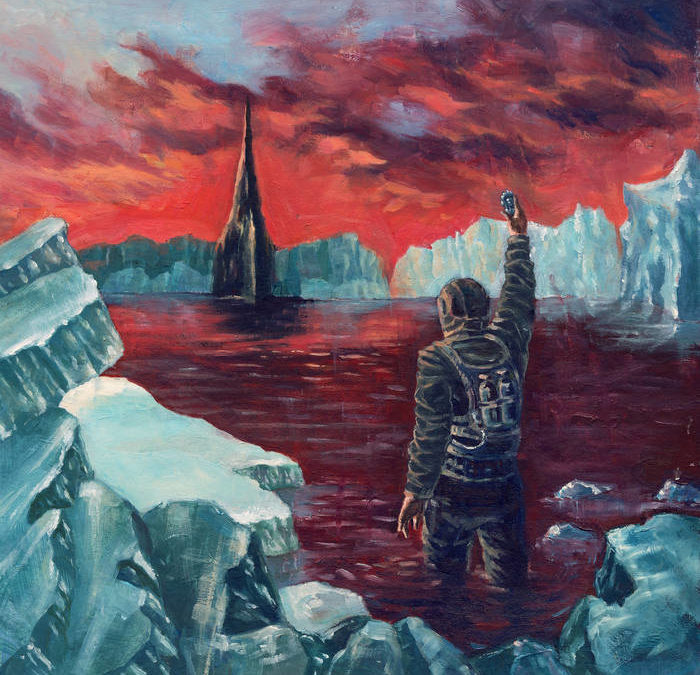 You don’t need to know this album is a science fiction fantasy to know that it is set in space. From the very opening notes, it is obvious that Cryptic Shift is about to take you far, far away from Planet Earth. A moment or two spent looking into the description (which can be found on their Bandcamp page), and you get a better idea of where the band is about to take you:

“DETACHED FROM THE XENOVERSE:

Dawn breaks upon my bewildered soul…

Shrouded in nostalgic fog; a dripping beacon module de-lulls me from a colossal dream-state as I stir from a cockpit seat…”

So begins “Moonbelt Immolator”, the album’s twenty-five minute opening track, which in itself is a masterwork of sound and vision. Some distorted jazz astronaut musician opens up the set. He seems alone floating in space, thick fog reverbing off his helmet. Soon, another spaced-out guitar cowboy joins him, along with equally jazzy drums and a fretless bass. These four (Xander and Joe Bradley on guitars, Ryan Sheperson on drums, and John Riley on the fretless) are having an incredibly interesting conversation, while working on a space station. This alone is an interesting enough symphonic journey, but a mere sliver of the awesome that is about to explode all over the unsuspecting surrounding dark matter (which, of course, includes any human lucky enough to be listening).

Yes, the aforementioned musical spaciness is present throughout, but there is so much more happening. There is an urgency to this music, almost like entire genres are battling for air time in some sort of Death Metal Jazz orchestra, complete with robot vocalists, and asteroid crushing guitar virtuosity, the likes of which may inspire Alex Skolnick or John Petrucci to start looking for day jobs. Every four minutes, it seems, “Monbelt Immolator” takes a dramatic turn, making it a play day for the listener’s imagination. Absolutely fascinating instrumentation on all fronts, even at times bringing to mind the experimental alternately tuned universe of Thurston Moore and Lee Ranaldo of Sonic Youth. It’s as brilliant as it is exhausting, ending with the sound of falling bombs.

“(Petrified in The) Hypogean Gaol” doesn’t waste any time with a needles segue, offering a much more straightforward Death Metal vibe, while still possessing some of the jazzy elements that make the epic opener so interesting. This song, along with “The Arctic Chasm”, bring to mind some of the work done by the late great Chuck Schuldiner of Death, the often dubbed “godfather of death metal”. And myself being an 80’s kid, failing miserably at playing guitar anywhere near as well as the musicians representative of that era, I can truly appreciate the playing throughout “Visitations From Enceladus” as sort of an homage to the age of the shredder, while still maintaining the integrity of someone like Jeff Beck.

I hope you’ll forgive me for focusing so precisely on the guitar work. The rest of the rhythm section is equally astonishing, particularly John Riely’s bass playing. It really is the kind of playing that may inspire a kid to pick up the bass in favor of electric guitar, joining such greats as Les Claypool and (speaking of the 80’s) Billy Sheehan, while also being as explosive as the low end in bands like Cynic or Beyond Creation.

The final track, “Planetary Hypnosis”, clocking in at just under six minutes, serves as a shorter version of “Moonbelt Immolator” in many ways. I cannot imagine this was anything but intentional, as the entire album bleeds purpose and intention. It is indeed an epic tale, set in a familiar but distant galaxy. It is also difficult for me to imagine that Cryptic Shift doesn’t already know where the story is headed, and that’s what makes “Visitations From Enceladus” so damned exciting! Because it is only the beginning, and I for one cannot wait for the next chapter.

Biography:  VUK is here for the music. He will stay seated for intermission, unless the house music is shit.