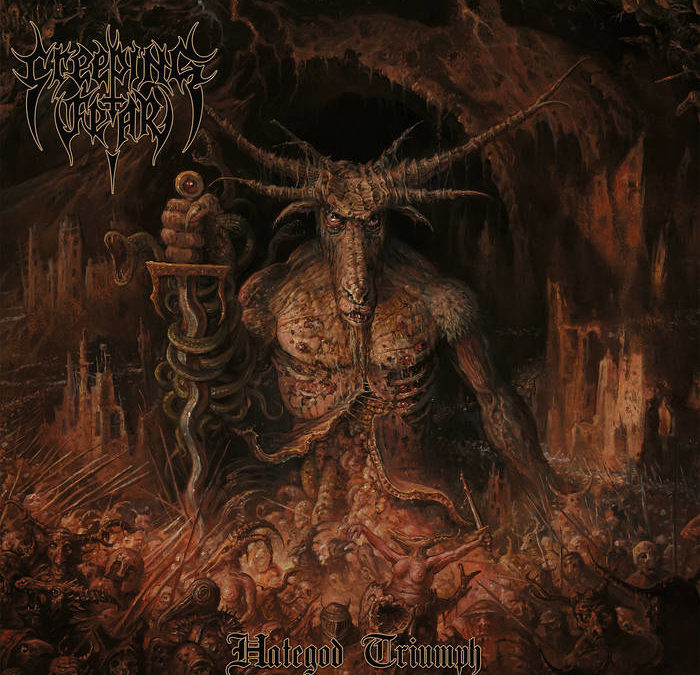 Obliteration of the highest order. That is certainly what you get with Hategod Triumph. Each time I press play (an event which has happened untold times), I’m once again shocked by the pummeling I receive. Hard, sharp riffs collide with cartilage and viscera. Artillery bass launch high caliber blasts into my cerebellum. Acidic vocals melt the flesh from my bones. Beneath it all is the weaponized drumming, machine gun spewing forth rhythms that tear holes clear through me.

I have often seen Creeping Fear compared to Hate Eternal, and I find that a fairly apt comparison. I’m a pretty big Hate Eternal fan (can Rutan do any wrong?), but this French band hold their own against them. Like the just named American band, Creeping Fear present a technical and difficult to penetrate wall of raw aggression. Every part of the attack is weaponized. Too many death metal bands promise brutality, but bring only boredom. Not so here. Hategod Triumph is true brutality. My so-far-nonexistent grandchildren will probably be born bruised because I’m listening to this today.

Hailing from Viroflay, Île-de-France, Creeping Fear is a quartet made up of Gabriel H. (guitar), Clément (vocals, guitar), Paul (bass), and Théo (drums). The band formed in 2010, and have given the world a demo, an EP, a debut full length, and now this masterpiece.

Hategod Triumph is like a rising sea, storm coming on fast. Dissonant currents are stirred up by the gnarliest of riffs. Power flows unseen below the surface as the sky gets ever darker. By the time you realize your danger, it’s too late. The swirling waves crash over you and the album won’t let go until it’s done. Only thirty-six minutes long, you still feel spent when the last note fades, such is the might of this album. Make sure you have your life preserver on, but then absolutely press play.