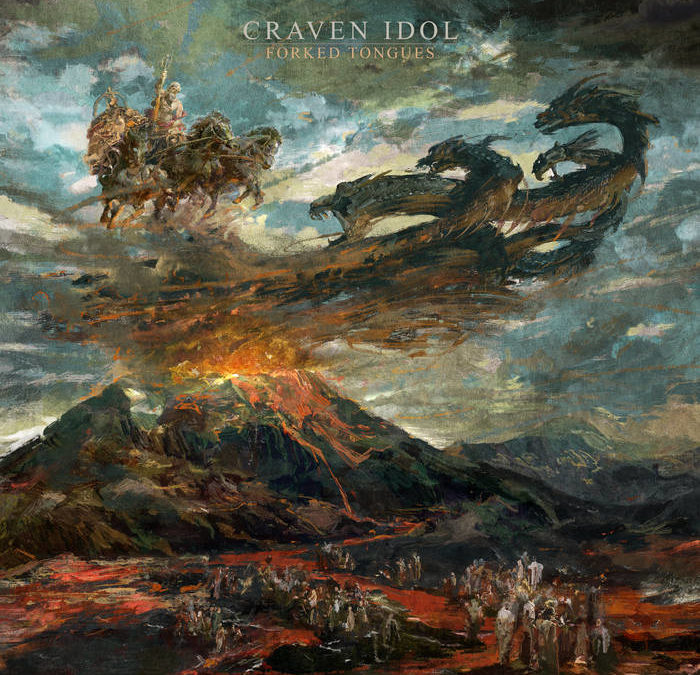 The UK is arguably the holy land of all things metal. With acts like Black Sabbath, Motörhead, Iron Maiden, Judas Priest, and Venom. It’s hard to argue against how most metal we love and adore wouldn’t be here if not for the UK. I could say the same for rock, punk, goth, etc (different bands obviously). But let’s keep this metal-related. That’s why we’re here right? Anyways, a modern blackthrash band that goes by Craven Idol has been doing a fantastic job of keeping the metal tradition alive since their inception in 2005. During the blazing summer of 2021, they unleash a scorcher of an album, ‘Forked Tongues’. I don’t say that lightly either. I mean, this thing is scalding hot!!!

Now, if I’m trying to stress how badass and infernal this album really is, it would only be right that it would blast you off at high speeds when you press play, yeah? Well, don’t you worry about a thing, because do I have some news for you. You don’t have any time to fasten your seatbelt as you’re blasted through a scorched earth erotica where the end times are indeed upon us, as a physical battle between good and evil is unfolding before our eyes. I must add quickly, that the album art is perfect, and it might very well be my favorite this year so far. Smalls words can’t describe it fully so on that note, we’ll just leave it here.

The blazing flames of death can be felt with fast drums and blasts, dueling guitars that in my mind resemble the hydra on the cover, and crack whip bass licks to keep the melodies in line. Going back to the hydra comparison. The guitar work on this album is literally insane, we have guitar riffs that harmonize like yin and yang, we have top-notch solos that cover the entire note range on the neck of the guitar, we have heavy chugs that could demand critical storms from the gods themselves, we have the cohesive of everything that is thrown your way to where none of it feels mismatched or forced. It’s exactly what it wants to be simply because it said so. Now with so much firepower behind the guitars, you need someone behind the kit who can keep up, AND at times outshine the bright hydra with such thunderous commotion. Again, you don’t have to worry because Craven Idol has its destruction down to a science. No one should ever dare question the might and sheer will of Craven Idol. This will definitely be on my AOTY list, quite possibly top 10.

‘Forked Tongues’ will be released on July 23th, 2021 through Dark Descent Records via digitally, CD, cassette, and vinyl (black and coloured). I’ve honestly ordered one of each format (colored variant only), and the shirt. I couldn’t pass up the awesome music and album art. Anyways, give the band and label a like so you don’t miss out on future news about the music we love so much.