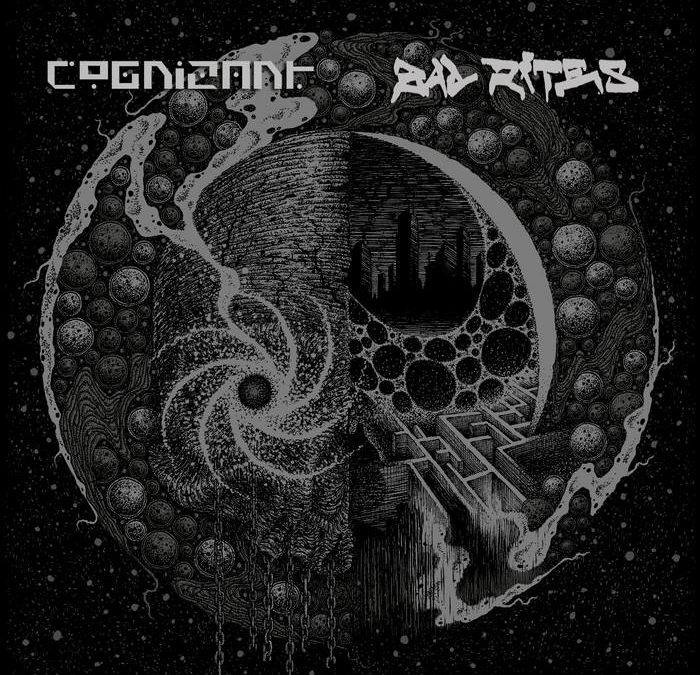 This split, coming in at a total of just over eleven minutes across nine tracks, features some absolute chaos. The Bad Rites side is the more chaotic of the two, but make no mistake, both sides bring it. Allow me a moment or two of allegory. The Bad Rites side is like three mongooses who are fist-fighting, while simultaneously riding a bicycle in pursuit of the cheetah that kidnapped their pet king cobra. The Cognizant side, on the other hand, is like an elephant, riding a nile crocodile riding a Texas armadillo, who is riding a bicycle to the nearest grindcore show. Both are wild, man!

Bad Rites is a quartet from France and Australia. I’m guessing band practice is interesting. Their side takes all of four minutes and twenty seconds to rip through five tracks of bonkers, chaotic fury. Listening to these tracks is like fighting a nine legged octopus. Just when you think you have everything accounted for, that ninth leg comes in for an uppercut. The drumming is manic insanity, propelling forward surprisingly technical riffs, especially given the speed with which they are played. Forget tech death, these are the real superheroes. The vocals are two fold, with a high pitched squall in counterpoint to a lower, raspier bark. Both hit hard in the midst of the chaos.

The Texas grind quintet known as Cognizant take over on the other side of the release. Like an approaching war horde, the group bring some riffs that are essentially battle-axes intent on decapitation. Featuring more dissonance in the mix than Bad Rites, they nonetheless also provide an excellent technicality to speed ratio. Drumming sounds like a shotgun with repeater, blasting forth scattershot in a herky jerky manner, though still absolutely rock solid. The vocalist here has the void-filled growl down to a science, adding a sense of ominous foreboding to the proceedings.

Regardless of which side sounds more your style, I recommend brewing a pot of chamomile tea prior to listening. You may need it to calm your nerves.