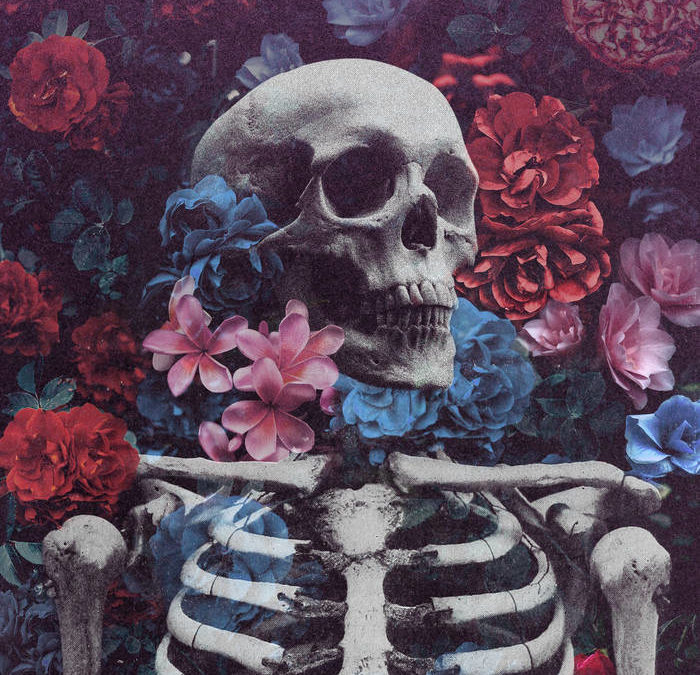 Where do I even start with this magical release? It’s taken me a long time to write about, because it’s so different, and so overwhelmingly good. It was released near the end of April, I had the promo probably a month early, and here I am in August still completely and wonderfully boggled by it. As I say in the interview below, I’m still trying to wrap my head around it, though my heart was completely captured with the first notes of the first listen.

Bandcamp says that the album mixes adult contemporary with black metal. That fairly sterile description is technically true. Those are the key styles involved in the creation of Corpseflower. However, when I read that, I don’t envision an album that I want to listen to, much less one that has drawn me back time and again. Though I don’t have an official count, this Cicada the Burrower release is undeniably in the top three most listened to albums for me this year.

Cicada the Burrower is the solo project of Cameron Davis, based in Wisconsin, and is being released through Blue Bedroom Records, Davis’ own label. This marks the fourth full length under this moniker, and is one of five (according to Cameron in the interview below) current projects. After some time going through the Blue Bedroom discography, I recommend a full exploration, but will admit that Corpseflower is my favorite on the label, at least so far.

Listening to Corpseflower is like being transported on a cloud bank into the atmosphere. Sometimes gentle and calming, sometimes a swirl of emotions, sometimes a raging storm, the album is fluid, but never weak. Even in the gentlest moments, Davis imbues great power into this work, and even at the peak of rage, there is nuance and a sense of contemplation. The five tracks are a beautiful study in contrast, almost a presence unto themselves, and guide to the listener’s self-contemplation, perhaps due to Davis’s own self-discovery through writing this masterpiece. It is hard to compare this to anything else, except perhaps piecemeal, as it has a uniqueness at its core. Flawlessly, stunningly moving!

Hayduke X: I’d like to start by offering congratulations on the release of Corpseflower. It is no doubt one of my favorite releases this year. Part of the reason it’s taken me so long to get to this interview is that I think I’m still trying to wrap my head around it, but my heart has fully engaged from the first notes of the first listen. I’d like to hear how you are feeling about it.

Cameron Davis: I’m happy to hear that! I’m pretty content with the record. It very quickly turned into art therapy for me. Writing ‘Corpseflower’ helped me decide to medically transition. Initially I just wanted to work through some feelings I didn’t have words for, but I wound up getting a lot more out of it than I expected!

HX: That’s pretty incredible. I often hear things about “art as catharsis” or similar ideas. Have you had other experiences where your art has helped you work through something?

CD: Not with the material in my back catalogue, though it’s possible ‘The Great Nothing’ provided me some minor relief. I did recently finished production on a full length for one of my other projects that seems to have helped me resolve some lingering romantic trauma though.

HX: The Great Nothing is the prior Cicada the Burrower release? That’s how it looks on the Blue Bedroom Records Bandcamp to me.

CD: Yup! That was the first record I wrote that was explicitly about my personal experiences.

HX: Wow! So what are some of the themes on there, if you’re willing to share. And is Corpseflower strictly about your decision to medically transition, or are there other themes going on there as well?

CD: For “The Great Nothing” it was a mix of memories I share with loved ones that I wanted to honor, severe brain trauma, and just absolutely hating depression. “Corpseflower” has more to do with realizing I’m trans, coming out, experiencing gender dysphoria and gender euphoria, and trying to figure out what my future will look like. I think the choice to start HRT was more the effect the record hard on me than the themes of the project.

HX: Has that been a difficult process? Are you finding that people are generally supportive?

CD: Overall, it’s been a surreal dream. My family and friends have all been pretty supportive and accepting. It is a very strange and isolating experience though. Hormones kind of change everything. I think differently now and I don’t really know myself anymore, but I’ve also never been this happy in my life. It’s hard to put into words. It’s extremely intense and relieving in a sense?

HX: I’m grateful to hear that. At least it sounds like it is a mostly positive experience. I hope that continues for you.

HX: Back to Corpseflower. Musically the album is an unusual combination of influences. On Bandcamp, you state that it’s a blend of adult contemporary and black metal, which makes sense. How did you even begin to go there though? I wouldn’t have thought to mix those, nor would I expect it to work so well.

CD: Obsession, honestly. Ever since the early 2010s, I’ve been consumed by this singular desire to write music that mixes black metal and soul. It wasn’t until around 2017 when I really started getting serious about it and began committing a chunk of every day to that aspiration (learning instruments, styles of music, building a routine, etc.). I wound up dealing with a lot of trial and error as a result, but that struggle is starting to pay off after all those years.

HX: I would say it’s starting to pay off. Wow!

HX: How many instruments do you play now, as a result? Do you have current targets that you still want to learn to play?

CD: Five if you count screaming! For the last year I’ve been really focused on getting my piano and drum skills up. Recently, I’ve given some serious consideration to trumpet, though I don’t think I have the time for it at the moment.

HX: I can make sounds (not good ones anymore) on one instrument (trombone from High School band), so I’m really impressed. I want to circle back to a comment you made earlier about “one of your other projects”. How many do you have? Are they all different styles?

HX: If I’m understanding correctly, you also run Blue Bedroom Records, which I see has some of those projects. There are other projects there as well. Are those old, defunct projects, or the work of others?

CD: Yup! Those are all either old projects I was in or something that a friend made. I’m really into black metal collectives like Black Twilight Circle, Rhinocervs, and labels like Colloquial Sound Recordings so I tried to do something similar, but in my own way.

HX: Cool! That makes sense. The Blue Bedroom Circle, or something like that.

HX: It looks like the label does some digital only and some physical. Do you plan to stick to cassettes and CDs?

CD: Yeah, I think going forward, if things keep going the way they are going, I’ll be focusing on a mix of CDs and cassettes for at least the next four records I release. Not sure where things are going to go after that though, maybe I’ll switch to strictly digital or throw vinyl into the mix. It’s hard to say.

HX: Will the new record from the other project mentioned above be released on the label? When should we start watching for it?

CD: They’ll all be coming from Blue Bedroom. I’ll hopefully be releasing Devour Every Star’s first full length, Antiquity, a little later this year. I’m just waiting on the album art and physical copies at this point so pre-orders should be up in the next couple months. Dolor will be released shortly following DES.

HX: I’ll be sure to watch for those releases. Can we expect more Cicada the Burrower at some point in the future?

CD: Absolutely! I want to take a year off writing to get better at my instruments, but once that’s all said and done I’ll be starting work on the next one!

HX: Do you have a live lineup and play live with any of the projects? Could that ever happen with Cicada, and if so, what would your corpse paint look like?

CD: Not currently, though three of those projects are collaborative. I don’t think Cicada will play live. The songs make me too sad and I wouldn’t enjoy playing them on the regular or in front of a bunch of people. I would like to play in a live band again though. Maybe one of the other bands some day. As for corpse paint. I’d probably go with the design I put together for a high school talent show I participated in.

HX: That makes sense. Hopefully I can catch one of your other acts someday. Now I’m really curious. That part of the question was meant to be tongue in cheek, but do tell…

CD: Fully real and honest. I can send you a pic or two. Got in trouble for corpsing it up and everything. 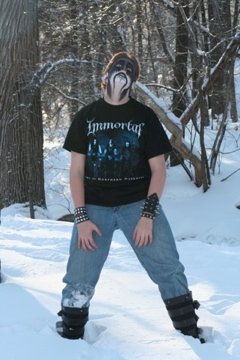 HX: Awesome. As a HS teacher, I think it’s completely inane that you got in trouble for that though. I hope one of my students comes in corpse paint one day. Lol. How did you first get into playing music? 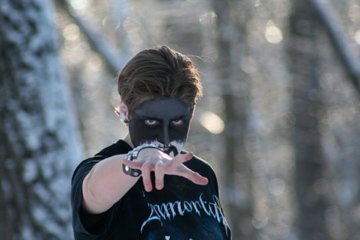 CD: I went to Catholic school. It’s a thing lol.

HX: That makes sense, but still stupid on their part.

CD: True. All my high school friends started a band and I felt left out. I picked up a guitar and started learning so I could play with them, but then I got into black metal.

HX: I had part of that happen to me. I just never picked up a guitar. Lol. What got you into black metal?

CD: The aesthetic at first. There was an article on 2nd wave black metal in an issue of Guitar World that I bought back in 2008. It was very eye-catching. After listening to the music for the first time I kind of lost it. It was so overwhelming and cathartic.

HX: Do you still listen to a lot of black metal? Are there some lesser known projects that we should be paying more attention to?

CD: Totally! Old and new, though the new stuff is usually way more exciting to me these days. Off the top of my head Gonemage, Sigil, LIMBES, Wreche, and Tenue are all worth taking some time and exploring.

HX: I’m familiar with Gonemage and Wreche and will second both of those. I’ll have to check out the rest. What else would you like our readers to know?

CD: Just that I’ve been totally blown away by the support. Thanks for listening!

HX: My pleasure. Seriously. Thanks for your time.

CD: The pleasure is all mine!