Bog Wizard VS Dust Lord – Four Tales of the Strange 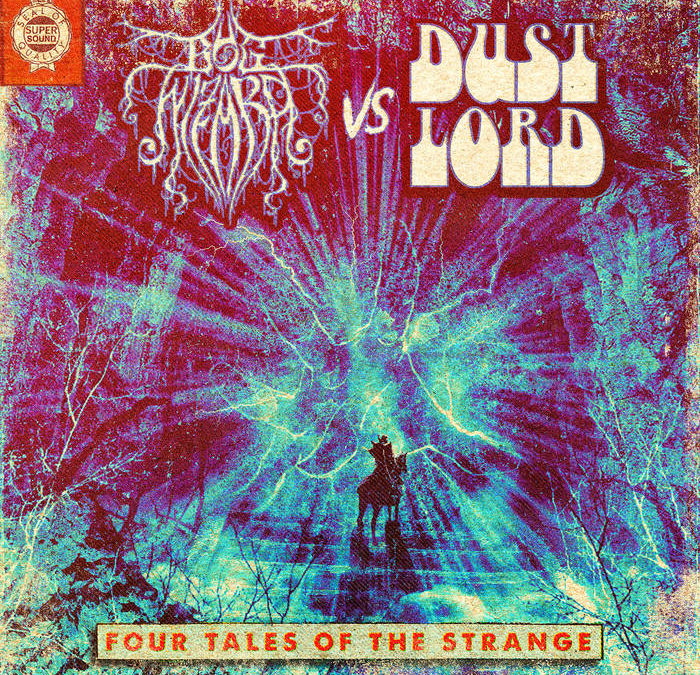 Album – Four Tales of the Strange

Dust Lord takes the stage first on this split of titans in the Stoner Doom scene. Hailing from Colorado, the trio bring the pain in a caustic take on the style. It’s fair to say that the band still qualifies as a stoner project, as opposed to sludge band, but they’re definitely situated in the middle part of that particular Venn diagram.

Most notably, Spike Whirley’s vocals are nasty barks of gravel and razor blades. But he is also responsible for the riffs, which are the most clearly stoner part of the two tracks they contribute here, and stellar riffs they are. Rob Deadraiser (drums) and Peter Low Frequency (bass) send out waves of steady, yet groovy, low end destruction to keep your fists pumping and head banging throughout.

On the flip side of the attack, we have Michigan’s own DnD stoners Bog Wizard with two monoliths of their own. We’ve covered them here before, and (let’s face it) likely will again. We like these guys. For those who missed it though, the Ludington trio is made up of Harlen Linke (drums, backing vocals), Colby Lowman (bass) and Ben Lombard (guitar, vocals). Taking an (evil) dreamier approach that plants the listener firmly knee deep in a swamp headed towards a grim cavern entrance, the band draws the listener in through rhythms that ever so slightly push forward, bass lines that talk directly to the cerebral cortex, and riffs both subtle and destructive.

After being impressed with From The Mire, the band’s recent full length, Gelatinous Cube and Paladin of Death serve as icing on the magical, toadstool-encrusted cake. The former in particular is vying for my favorite track by the band (with several quality options) across its ten and a half minute journey. I think the only important thing left to say, is roll for initiative!