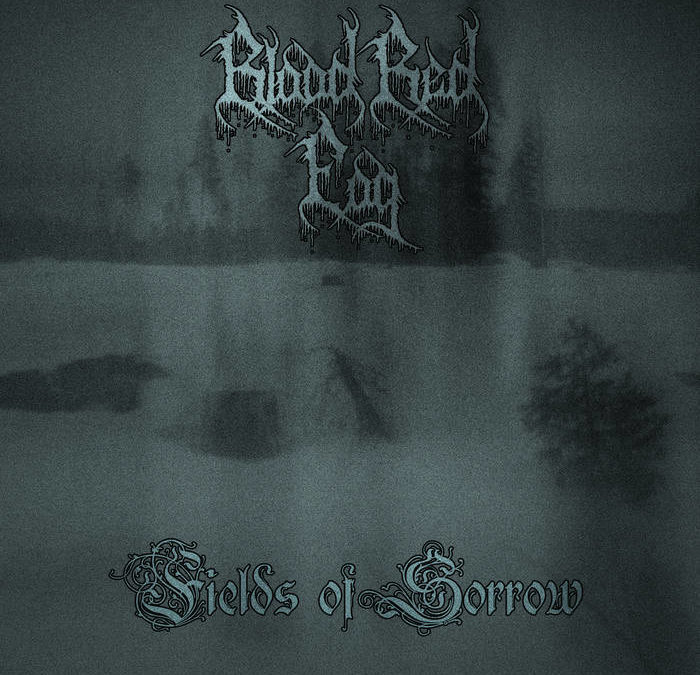 Blood Red Fog is a band that was rather new to me. As in, I just found out about these guys a scant few days ago. I don’t know what kind of rock I’d been living under, but it was large, and there was a very deep hole underneath. Imagine my surprise when I found out this band, hailing from the Black Metal rich soils of Finland, have been at this since 2004. Sixteen years and going strong, and I was absolutely oblivious to its existence. Oblivious, and seriously missing out. So with that, let’s dive into an album review for this newest effort, “Fields of Sorrow”.

The brief intro piece, “Before the Cold Light”, is something a bit different. It’s synth heavy, which is absolutely nothing new AT ALL in the realms of this genre we call black metal, but it has this “space-y” vibe that I hadn’t heard (or really paid attention to) since the opening moments of “Yearning the Seeds of a New Dimension”, from the mighty debut album of In The Woods…, “Heart Of The Ages”. I know, I know, there’s a lot of spaced themed black metal bands out there that use similar sounds, but In The Woods… was seriously my first thought. Then you hear the opening strum of electric guitars right before “Gallows Poles and Shallow Graves” comes blasting forth. And then you quickly realize that this is not really going to be your ‘typical’ Finnish black metal album. Rather than a display of vicious, furious string shredding, we’re treated instead to quite a mournful, almost somber, droning tremolo picked riff that would not be out of place on a DSBM album. But on top of blast beats. After some thought (and repeated listens), it dawned on me that this sound on display, sits on a fence between Finnish and French black metal. In fact, upon my first listen, I immediately had bands like Caverne, Nécropole, and others come to mind, even though the riffs overall aren’t that almost medieval, baroque type melodies the French scene is known for. It’s really hard to explain *why* those types of bands came to mind initially.

Now, with that in mind, you can imagine my surprise when I found out that the main main himself, Vesi “B.R.F.” Lahti, just so happens to be a live guitarist for none other than Nécropole! So of course, my very next thought was “ah, that is where this ‘French’ influence is coming into play, OBVIOUSLY”. Nope, I went back to check out the back catalog, and that vibe has been there all along. So perhaps it was more the idea of his playing style that appealed enough to the Nécropole folks to want B.R.F. to be their live guitarist? Whatever, I am now getting way off track here, let’s get back to the album review, shall we?

As mentioned earlier, the first track after the intro (“Gallows Poles and Shallow Graves”) establishes this Finnish/French hybrid run through a DSBM filter, riff wise. But much more intense in pace. And this is a formula that runs throughout the course of the album. And those “space-y” keyboards I also mentioned, from the intro? Absolutely an integral part of the sound. It gives off, I’d almost say, a psychedelic aspect to the music. Sometimes it’s in your face, other times it’s more subdued and swirls in and out throughout. The more I listen to this, the more these flourishes come to the surface, and it is AWESOME. There are more traditional type synth parts that pop up here and there, but all in all it’s the glory of the Moog! The riffs and synths reach their highs in the later part of the album, specifically on the back to back tracks of “Mustasta Unesta” and title track “Fields of Sorrow”. I can honestly say the way this album is laid out, is definitely by design and absolutely builds up to this two track climax, which takes up over twenty minutes between the two. It’s rather glorious.

Ok, obviously, there’s more to this album than hybrid riff stylings and psychedelic Moog synths. The drums, handled by B.R.F. himself (along with everything else aside from bass), are straightforward, not flashy, works perfectly for the music. Bass, handled by Antti “Desolate” Ojala, is a great compliment to the guitar work, and is often more “felt” than “heard”, but has moments that shine. Vocally, B.R.F. covers an array of styles, but a harrowing shriek is what is presented most often. And in context of the music, it fits perfectly. The production work on this keeps the vocals at a level to where it’s just another instrument, and not in your face. Speaking of production, it is top notch. Like other Finnish (and French) bands, the sound initially comes off as very raw, but you then realize that every instrument is heard, everything has their space and their moments to be heard and appreciated. It really works for this album, VERY well.

I also feel the need to point out another thing about this album; all the tracks flow into one another, making this quite the immense fifty-one minute listening experience. And the tracks flow together so well, you’ll find yourself not realizing that you’re halfway into another song. Each time I’ve listened to this (it’s been a lot of times now), I’m still catching myself being surprised to find that I’m not listening to the song I had previously thought I was. Heh…

In short, this is a great, GREAT album, and quite honestly one of the better ones that 2020 has had to offer, in my opinion. It’s making my best of list anyway, and I would hope it will make others as well. But, I fear the reality will be that this will pass under many radars, like this band’s entire existence had flown under mine. DO NOT SLEEP ON THIS BAND. DO NOT SLEEP ON THIS ALBUM.

Biography:  Tyler “Seele Mord” Platt is a long time black metal fan (circa 1995), and literally grew up with rock and metal. When he’s not listening to music, he’s exploring the peaks and valleys of his home in Alaska, and also creating his own music, currently drumming for Rübezahl, and previously with the likes of Bound By Entrails, among others.