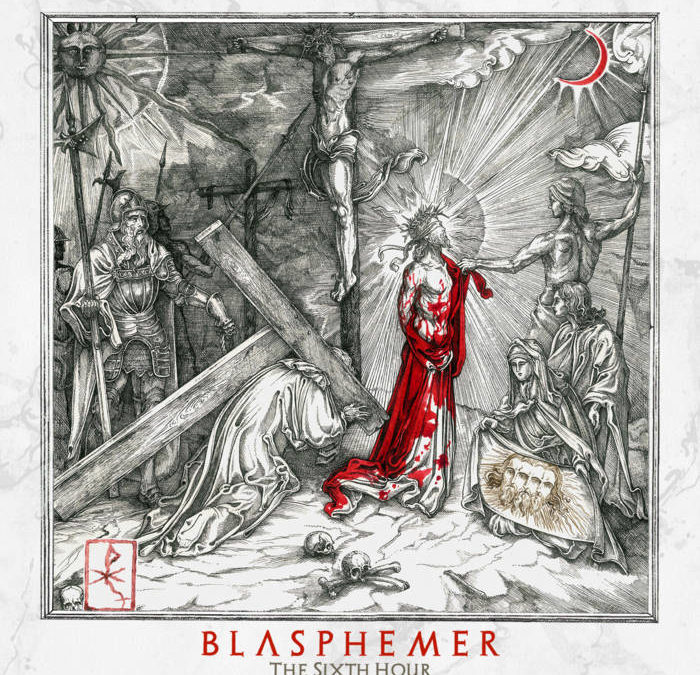 Sadly, I only discovered Blasphemer a few weeks ago during one of my trips down the YouTube rabbit hole. This is sad because the album I stumbled across, Ritual Theophagy, is frickin’ sweet and I wish I’d heard it when it was released FOUR YEARS AGO!!! It felt like listening to Deicide, if Deicide had pushed the Tech Death Metal aspects of Legion. So, I asked the good folk at MoshPitNation if I could review Blasphemer’s new album, The Sixth Hour, and they kindly agreed.

If you’re familiar with the Italian quartet, you’ll understand that The Sixth Hour is a bit of a departure from Ritual Theophagy. Firstly, Blasphemer have changed vocalists. The vocals on Ritual Theophagy reminded me of Deicide. The vocals on The Sixth Hour remind me of Dethklok or Suffocation. This isn’t a criticism; it’s just an observation. The other thing I noticed was that the bass is far less prominent on the new album. This made me sad (again) because the basslines on Ritual Theophagy are great. They cut through the mix like a warm spoon through panna cotta. Here, they can be a little hard to hear.

Another difference is that, on their latest offering, Blasphemer place more emphasis on Black Metal. Don’t get me wrong! I love Black Metal. I’m all over Black Metal like Australians are all over dunny paper at the moment. People really are prats! Anyway, there are still some Tech Death Metal elements here, but this album feels more accessible overall. I know that’s an odd comment to make when I’ve suggested Blasphemer have integrated more Black Metal elements into this album. I guess it’s musically simpler than their past outings. It might sound like I’m complaining, but that’s not my intention. By way of analogy, I guess it’s like when your life partner goes to the shops and asks if you want anything. You ask them to grab you a Twix. Upon their return you discover that they bought you a fucking Kit Kat. Sure, it’s still good. But, it’s not what you had your mouth set to expect.

Just because I wasn’t expecting this from Blasphemer doesn’t mean I didn’t like it. This is a very strong release.