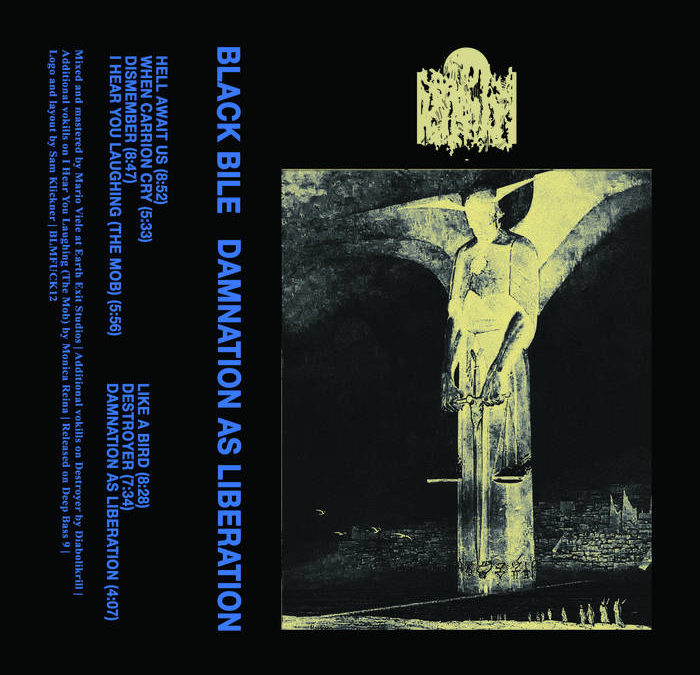 Black Bile is a project I happened upon while searching for weird tags on Bandcamp. The pitch of blending industrial, doom, and war metal to make “cathartic blackened antifascist hymns & devotionals” was enough to convince me to try it out, and Black Bile wasted absolutely no time defying and destroying all my expectations. DAMNATION AS LIBERATION combines familiar flavors into an entirely new experience. Perhaps it’s the cosmopolitan influence of their native Queens, NY, that inspired the merger of raw black metal with filthy electronic instrumentals; perhaps it’s innate genius on behalf of the artists; maybe it was just inevitable in the post-social-media age of music where everything influences everything else. Whatever it is, it’s rad and I hope you’ll join me in checking it out.

We tend to think of postmodernism as a 20th century phenomenon, and it is in the sense that the impetus for its origins and the sources of its motivation came into existence during that time, but the fall of the Soviet Union didn’t undo those ideas, those challenges, those accusations of society that postmodernism and its various offshoots had shoved into the collective social consciousness under what seemed at the time to be an imminent nuclear apocalypse. Well, we’ve got a new apocalypse on our hands, and all the rules about art are still up in the air.

DAMNATION AS LIBERATION is a brilliant rearrangement of established, even tired, tropes into an ambitious and novel style of being dark and heavy. Black Bile wear their influences openly on their sleeve, but the ideas and concepts they borrow are so far removed from their original context as to make for a completely different sense of artistry and emotion in their execution. Raw black metal forms the backbone of a sound that bristles with electronic elements; DIY metal music tends to rely on MIDI by necessity and not by choice, but Black Bile really lean into its use all over DAL from the classic Roland-style drum machine sounds to the ambient darknoise parts all served with a dance-able industrial goth vibe. There’s unexpected pop media in the mix as well, including a bizarre rendition of Nelly Furtado’s 2000 hit “Like A Bird” but I guess compared to other things that have happened this year it’s just par for the course. What’s not average, however, is the furious and innovative sound that Black Bile craft with the toolkit at their disposal.

I wish I could tell you more about the creators of this beast of a record, but information about the band is fleetingly scarce. Unfortunately, I can completely understand why they would want to protect their identity and privacy; the band’s explicit antifascist sympathies have been vilified and even criminalized by the centers of power throughout the world, and supporters of fascism love to use online harassment as a tool to silence hopeful voices of dissent like Black Bile.

Recommendation – Hitting somewhere between harsh noise and goth night at the dance club, DAMNATION AS LIBERATION is unique but oddly broad in its appeal. People who like black metal might not like this, but people who don’t like black metal might find something they enjoy here that was missing from other blackened-style music they’ve tried