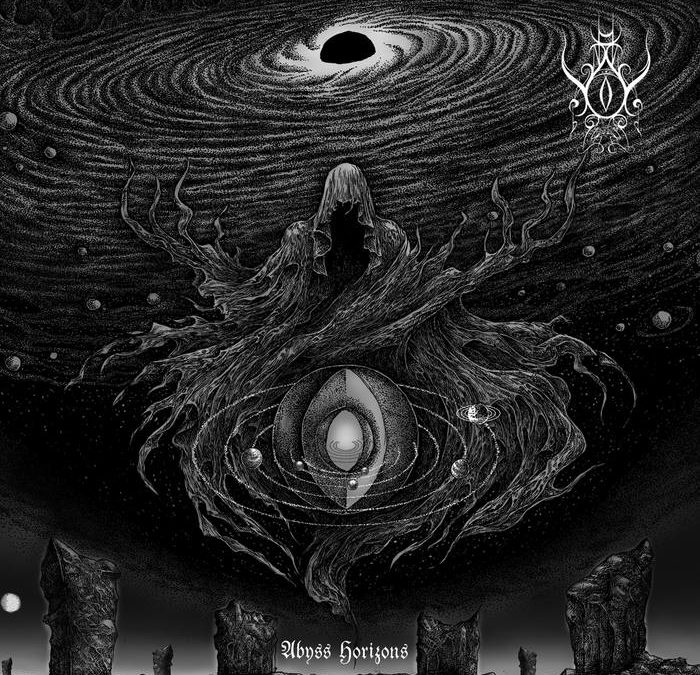 Black Metal for me is all about the journey. Where can an album take you? A certain amount of imagination is paramount to it’s full enjoyment. Perhaps this is doubly true in the rather niche subgenre of Cosmic Black Metal. The visual appeal of an album’s art, the prelude of an artist’s intentions, the lyrical content, and atmosphere all guide the listener as they take a journey into the coldest recesses of space. Once there, as they peer into the darkness, they subsequently peer into themselves and consider their place in the universe, both physically and spiritually.  Battle Dagorath does an exceptional job of this on their latest album: Abyss Horizons.

The black and white album art is of a death-like hooded figure hovering menacingly over some sort of celestial system that orbits around an object reminiscent of one’s third-eye. Overhead an ominous black hole looms, waiting to suck everything in. I imagine it to represent both the outward universe and the inward universe that exists within our minds and the uneasy awareness we all possess that just on the horizon there is nothingness in the abyss. This dismal imagery fits well into the usual black metal motif and creates a tone for the celestial void to be unleashed.

The album begins with the frigid ambiance of “Womb of the Labyrinth” that portrays the emptiness of our universe and sets the stage for a vast journey. We move onward towards the slow building “Incantation of the Vortexx” that opens up into a restless harshness of tremolo guitars and furious blast beats covered in otherworldly shrieks. It’s over sixteen minutes runtime is an ebb and flow of layered synths and riffs that lie waiting to be peeled back. After the onslaught, we are given comparatively brief respite in “Spectral Emanations” with a few minutes of further ambient waves of ethereal noise. “Phantasmal Eye of Dreams” wastes little time setting things ablaze once more and we settle into a pattern of sorts. This is another sixteen plus minute track with a lot going on. Constant shifts in velocity carry everything through the chaos and back again. The pattern repeats as the next ambient track “A Voiceless Call” is followed by two more lengthy ferocious tracks, “Conjuring the Starwinds” and “Twilight of the Cold Sun”, then a closing ambient one in “Saturnian Moons”.

Abyss Horizons is rather cyclical as it is a constant in and out between the ambiance and the bleak aggression. It is an excellent experience nuanced with the same thick atmosphere over the entire package and tying it all together. Although this album is full of ambiance, it never feels drawn out and I found that it’s over seventy minute runtime flew by, leaving me eager to dive back in.