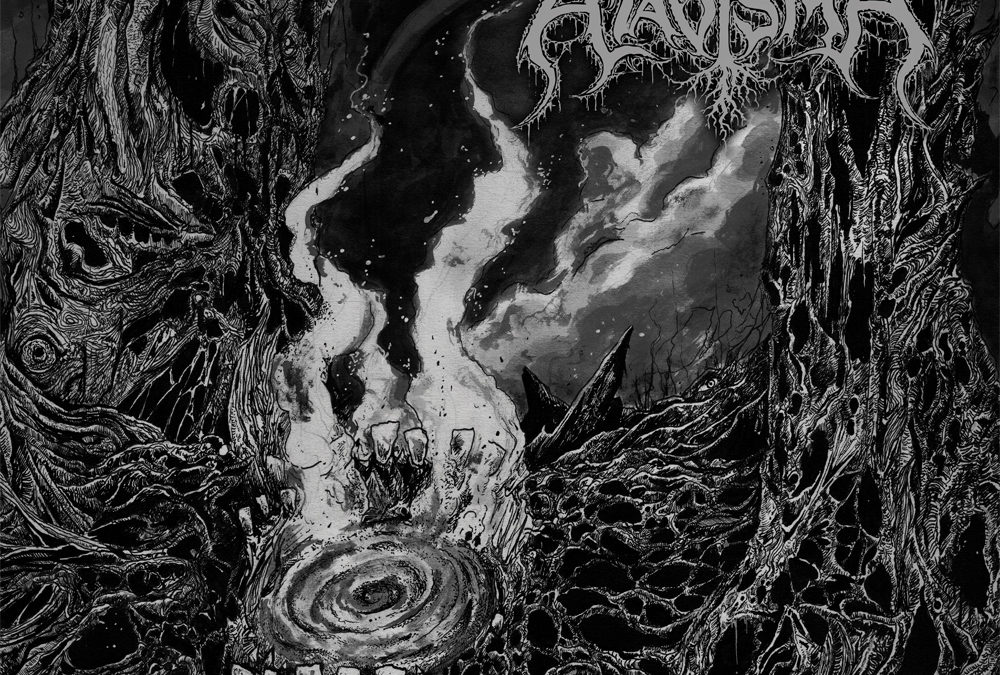 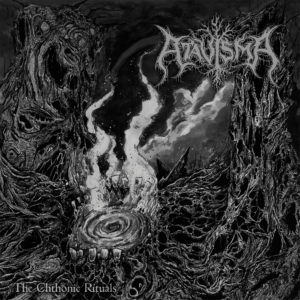 The humanoid creature steps forth out of the shadows. Diffuse red light glows from somewhere making every surface of cloth and flesh and rock seem to flicker with molten embers. Emanating from the recently vacated shadows, a rhythm begins, simple at first, then, clanging and thumping and slapping, picking up in both intensity and complexity. As if from nowhere, unclothed dancers, six in number, are suddenly writhing and twisting to the rhythms as a harsh, undulating chant begins to issue from the hooded figure, and a symphony of demonic thrall begins over top of the rhythm.

As the opening percussion starts on The Chthonic Rituals, it’s easy to imagine a scene such as the one described above. The music starts simple, then slowly picks up in pace and complexity, while never getting to technical. The musicians involved, G. (guitars, lyrics), L. (vocals, lyrics), W. (bass), and Gabriel DeLoffre (drums) are clearly all talented musicians, but the strength of this exceptional album does not lie in any particular technicality of musicianship. Rather, the strength is in the composition. One gets lost in it. The ritual is uncompromisingly effective.

You stand enthralled behind the man-thick stalagmite, watching in awe at the scene before you. The red glow begins to dance and twist in harmony with the rhythm of the music. The dancers shudder and collapse, only to rise again, all in perfect unison with the notes pouring forth from the darkness. The hooded one continues to bark and growl out his chant in an obscure language that surely no man has heard or spoken before. As you watch, the scene begins to spin. Each time you spot his robe, he appears larger. You realize with sudden horror why this is so. You have been compelled by some unseen force to join the macabre dance.

Striking an exceptional balance between clean and cavernous production, the sound of this album is large and echo-y, but not distractingly muddy. DeLoffre, W. and G. on drums and bass, make the rhythms naturally ebb and flow, deceptively complex. There are moments of mania and moments of calm, but they flow in and out without really registering in your brain. The riffs G. draws forth on the guitar are filthy, sometimes dissonant, often tremolo, and thickly layered amongst the rest of the sound. The vocal style of L. is deep, at times feeling like it’s almost below human register, and growled. The effect over the music is of a calling forth.

Now completely lost in the hypnotic effect of the ritual taking place, you fail to notice the crack form in the floor of the cavern, even when it grows wide enough to fall into. You don’t noticed the pungent green mist swirl out of the newly formed crevasse, nor the two glowing orange spots near the top of the mist as it swirls into humanoid form. You even barely register the pain, excruciating though it is, as the mist forces its way into your pores. You are too lost in the trance….too lost in the rhythm of the dance. And then you no longer notice anything again, as you are no more. He has been called and He has risen….

An atavism, as I understand it (and I’m no expert), is basically a genetic throwback in biological terms or a reversion to prior ways of life in social science terms. In many ways, the music holds to that idea. There is none of the modern technicality found in a lot of today’s death metal, nor any chuggy -core influences. Chthonic refers to the underworld in mythological terms, which is surely the place this music is formed and nurtured. Both ideas make sense here on this ritual of darkness and depth. Will you dare to peer around the stalagmite?

Recommendation – In a dogfight for best death-doom release of the year. I won’t name the other contender here, but if you’ve been following along, you know.