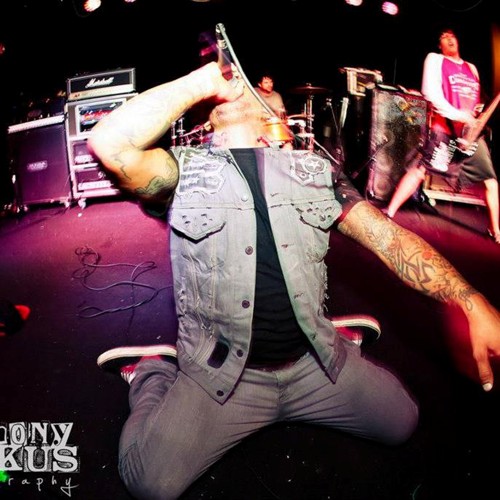 Lansing legends Know Lyfe have been paying their dues for a decade plus, having done several DIY tours across the US and all over the state of MI, proving that a tireless work ethic and humble attitude are still the foundation to any success that a band may hope to achieve.

I recently got to sit down with lead singer, Alfonso Civile, to discuss the bands beginning, the constant changing climate of the local scene over the years, as well as the bands plans for the upcoming year.

MPN: Having been in a band for over a decade, what keeps everyone in the band going?

AC: We just love what we do and the music we make. I really don’t think any of us do this for any other reasons. It is fun and because it is fun we continue to do it. I think we all still feel the same way we did when we started this in 2000. The difference is back then no one knew who we were, now we are semi established and actually have dedicated listeners.

MPN: In a day and age where people can’t seem to commit to being in a band for more than a week, how have you maintained ¾’s of your original lineup as long as you have?

AC: We are above anything else friends/family. Do we get on each other’s nerves? Yeah of course, but I think we all know when we need to stop pushing and just let things ride. We all trust each others judgment in this band and know that not one of us would purposely put any of the others in a crappy situation. We respect each other’s boundaries and actually hang out outside of the band setting all the time. I don’t understand how anybody can be in a band where there is no real friendship.

MPN: What is the biggest difference you’ve seen over the last 10 plus years of actively gigging locally and nationally from when the band started till now?

AC: The music obviously and the style….there is no originality anymore. Everyone wants to copy everyone else or have some gimmick. Which is fine you know? Do what you do and live it I guess, but for us we stick to our guns on the “this is who and what we are as a band and if you don’t like it to fucking bad.” Had we approached this band and its music any other way we would be in the long list of MISS MAY I carbon copies, or whoever is popular in that style of music. In no way am I saying that band is bad, not at all. They are just popular and have that “right now sound” young bands gravitate towards, that and labels love that because it is easy to sell and market. That is the biggest thing we see….most bands aren’t doing it for love, they are doing it because they think they are going to be on a tour bus playing sold out shows every night…news flash young bucks…shit ain’t real.

MPN: What are some goals that you still haven’t reached as a band?

AC: Open for the Deftones. Get a decent record deal on a recognized label. Tour Europe and South America and all parts not in the U.S. lol. Be on a recognized long term tour with well established popular bands. There are so many more goals.

MPN: Is there a moment(s) throughout the bands history that you are still in awe of?

AC: Every day is one of those moments. We started this in college as freshman and sophomores. We never expected it would grow to what it has, and really never expected to do some of the things we have been fortunate and blessed to do. The awe moments never stop man.

MPN: What are some great bands that you have seen or played with around the state that you feel people should know about?

AC: PRALAYA, OF VIRTUE, NOTHINGMORE, THE STORIED LIFE, KNIVES ARE QUITE, IN HEARTS WAKE, THE SKY LIT LETTER.

MPN: Do you have a favorite venue to play locally? Nationally?

AC:Locally: The Loft in Lansing, MI. Nationally: The Machine Shop in Flint, MI.

MPN: You have a new album coming out sometime next year, is there any information that you can give us, name of the album, producer, guest appearances and when you’ll be hitting the studio to record it?

AC: Yes we can 🙂 We hope to have it out by April or May, at the very latest June. We haven’t decided on a studio just yet, but are shopping around while we finish the writing process. We are thinking this will be a 10 song record, maybe 12. We have some guest appearances scheduled. One has already happened with our great friend Brock Lindow from the band 36 Crazyfists. We have a new song we are releasing come January called “Moxie” and that will feature Karl Schubach from Misery Signals, and we are stoked about that. We are also in talks with a few other guest appearances but can’t really say until we have everything confirmed 100%

MPN: What can we expect from this new record?

AC: For one it will be our heaviest fastest record yet. It will also be even more diverse than anything we have released to date. Meaning expect to hear shit you may never have thought a metal band would do on a record. We don’t follow trends to where the record all sounds exactly the same song wise. We want to explore every avenue of metal from death, to hardcore, to punk, to hard rock, to thrash, so expect all of those.

MPN: Besides putting out this new album, what can we expect from Know Lyfe in the 2014?

AC: We have a new video coming out for the song Building an Empire off of our 2011 release “Empire of Wolves”. We are also planning some cool tours.

MPN: I recently saw that you are starting a series of monthly shows at the Loft in Lansing where tickets are only a $1. How did you come up with this idea, what are you looking to do with these shows?

AC: That was a borrowed idea from something a venue in Grand Rapids used to do back in the day, and I just applied it to the Lansing market and I hope it does well. I just hope it will engage bands and fans to support and grow the scene. Right now Lansing’s metal scene is alive but it is on the back burner. Our biggest production company here is more interested in the indie and hip hop genres, which is great, but I am not much of a fan of indie music at all, and am very picky about my hip hop so most the shows they put on are not my cup of tea. They obviously always sell out, but still I am not one for that style. When they do throw a metal show it is either some very popular “RIGHT NOW” band, or some elitist band where 95% of the crowd is 16 and swears they know everything about hardcore….so I feel like this can sort of bridge the gap in all that and give locals a chance to shine through and build a stronger scene between all different types of bands/genres, not just metal bands. The market is starving for local artists and we have to start making local artists the stars rather than keep promoting the same ole label smoke and mirrors game. 9 times out of 10 local bands provide half the draw to most beginning and mid level sized touring national bands. What kinds of bands are you looking for? Any really. I would rather get a more rock type vibe, but you know any type is fine. Of course I’m partial to metal and think that it needs the most representation right now, but I am not trying to make it one specific type of band/sound. That would defeat the purpose. I think the least type I want is indie, not because I think it is awful or anything, but because FUSION SHOWS has that market tapped and down to a science.